So I was recently rewatching Princess Tutu (again), and I finally came up with five episodes I’m content to declare as favorites (which is way harder than it was with Fruits Basket due to the far more consistent quality). These aren’t necessarily the “best” (they’re not even always the ones I most enjoy, as that often fluctuates with my mood), but I certainly enjoy them a lot every time I watch them. 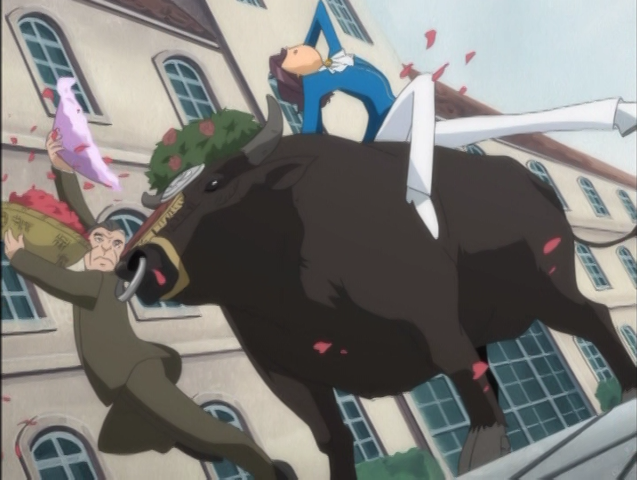 This episode is just peak comedic Tutu.  Femio is fabulous and I’ll not hear otherwise.  Of course, there are also some heartbreaking developments with Rue, too, but this is mostly here because it provides laughter at a point in the story where it’s sorely needed.

The tale can no longer be halted.

This was a close call – I was tempted to include The Black Shoes instead, but this one won out primarily because it’s not all sadness all the time.  It does have quite a bit of darkness to it, of course, but it’s pretty well balanced with lightheartedness early on. It’s the first episode to really show all four of the main characters in action at once, not to mention that it spells out their respective roles in The Story.  It also holds up wonderfully to rewatches, with the tale of the ballet La Sylphide providing a framework for understanding Rue and Mytho’s relationship as the story continues to unfold.  Also the music selections are top notch and there are some pretty iconic images.

Marionettes are at their most free when they are being manipulated by their strings.

Again, it was tough choosing between all the fantastic episodes from the end of the series (honorable mentions must go to Crown of Stone and The Dying Swan), but this one manages to develop all four of the characters in addition to representing a turning point in the story.  Also a lot of these last few episodes are just too depressing, whereas this one manages a glimmer of hope in the onslaught of tragedy.  The look of this episode is really unique, yet it’s only an extension of the clockwork imagery present from the beginning.  It sure doesn’t hurt that I happen to love the music of Scheherazade, either.

I cannot speak words of love to you – but I can dance.

What can I say? This series has truly transcendent finales.  I can’t think of any other story that makes me want to cry tears of joy and of sadness at the exact same time for completely different reasons.  The imagery is not only iconic, but actually tells a significant portion of the story.  Somehow it even makes the deus ex machinas feel legitimate and earned.  This is art, pure and simple.

Let’s give this story a happy ending.

I honestly can’t think of anymore to say at this point.  It’s simply beautiful.  I cry every time I watch this episode without fail.  Not only is it the finest application of a metanarrative device I’ve ever encountered, it’s one of the best endings I’ve experienced in any medium.  It’s all worth it for this.