Once upon a time there was a princess who was held captive. She was imprisoned in the demon king’s castle, her freedom taken from her. The princess had no choice but to dance like a puppet to the tune set by the whim of her sadistic captor. One day, a hero came to fight the demon king, seeking to save the princess. However, there was no way the hero could obtain the victory, for you see, the hero did not know that he himself was a puppet that the demon king had created. 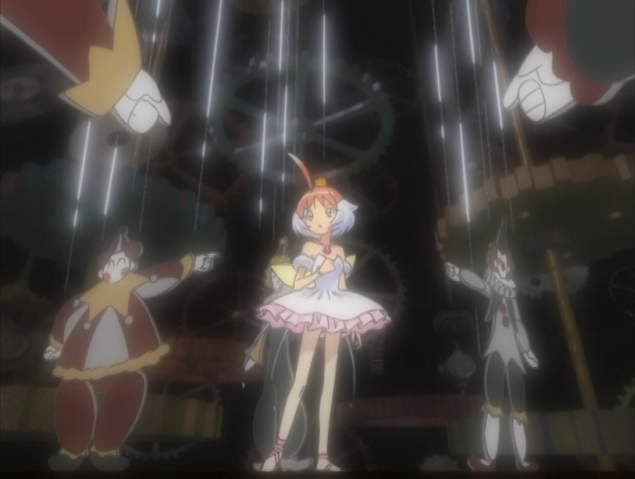 These feelings are brought to us by Chiaki Konaka, master of character development. Here we see the themes of Coppelia coming head to head with Scheherazade, the queen who saved herself with stories.

Also, Rue’s world is crumbling around her. 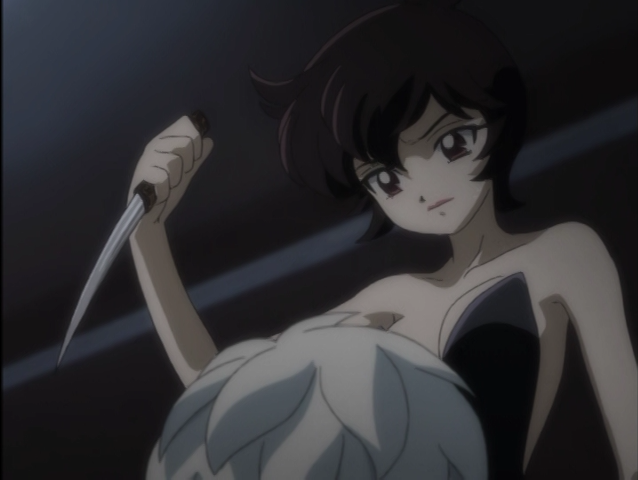 Mytho: I want to get all my feelings back, the sooner the better. Once that’s taken care of, I can give the Raven my heart.

Princess Kraehe: What are you saying? That’s a joke, right? The Prince is fated to marry no one but me.

Mytho: Marry you? You, who in spite of being a crow have that ugly human body? That’s the joke. The only thing that you are allowed to do is love me. The moment you dyed my heart with Raven’s blood, our fates were immediately sealed.

Now she finally realizes the trap that she leaped into.  Mytho has essentially the same view of her as the Raven now; she’s just a pathetic girl who can be manipulated by her love-starved affections.

Seeing what a monster he’s become, Kraehe resolves to just kill Mytho (and herself afterward), but somehow Mytho manages to make it all worse.

Mytho: I have one last favor to ask. After you’ve ripped my heart out, I want you to kiss it, and dye your lips crimson with my blood.

And this is only the beginning. Meanwhile, Drosselmeyer is having a blast tormenting Tutu by controlling her body and making her dance.

Princess Tutu: I’m just a marionette, dancing exactly as I’m told. I don’t like this. I want to dance more freely.

Drosselmeyer: Such thinking is mistaken. Marionettes are at their most free when they are being manipulated by their strings. You won’t be able to leave this place unless you acknowledge that. Thus Drosselmeyer seeks to “correct” this wayward character who just won’t do what he wants her to. Weirdly enough, this is actually not an uncommon complaint from fiction writers: Some characters simply refuse to do what you “need” them to do, and it’s frequently a relatively minor character (as Tutu originally was) that gets finicky like that.  Of course, Drosselmeyer is just frustrated because Tutu isn’t angsty enough for his precious tragedy.

Drosselmeyer: And yet, to think the returning the Prince to normal is more important to you than your own problems. You’re a much different duck than you once were, whose sole desire was for the Prince!

So her problem is that she’s not “desperately in love” with the Prince, or at least not so desperate that she would turn her back on all the other people she’s come to care about.  Really, though, if Drosselmeyer could just stop trying to force his grand tragedy as he originally envisioned it, it would be quite obvious that her weakness lies in Duck, not Princess Tutu. 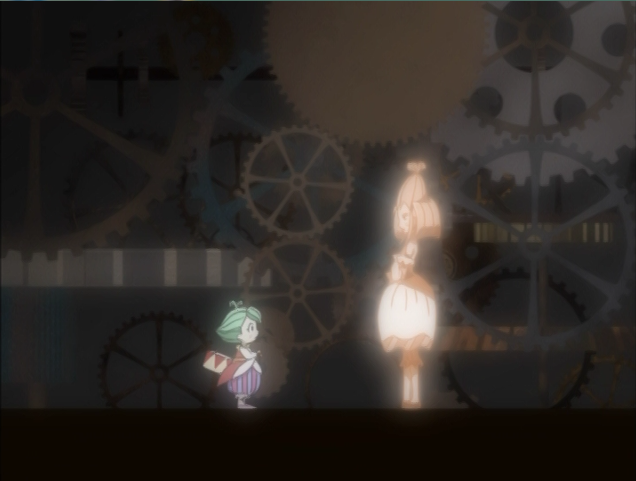 Then Uzura comes to the rescue (because she managed to tag along with Tutu somehow).  She’s a welcome presence in the episode, not only as a friendly face in Drosselmeyer’s clockwork world, but honestly just to break up the highly emotional interactions among the central players. Although she does get one little heartwarming moment of her own when she encounters Edel’s ghost.

Edel: I am a puppet who could not have a heart, but you…

But she also manages to move the plot forward (almost by accident, as always) by turning the story backwards. 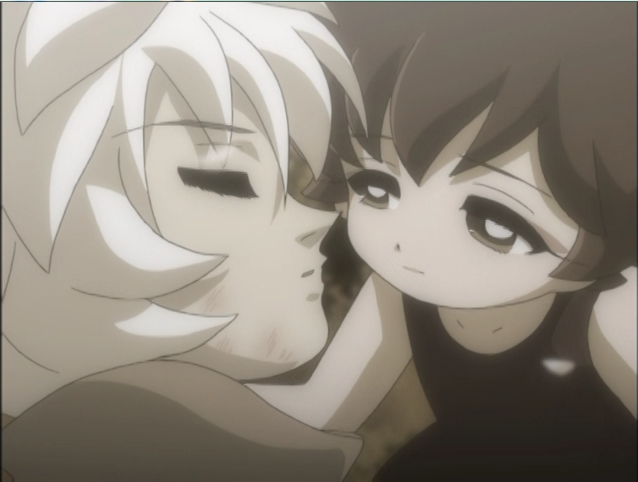 Princess Kraehe: I want to go back to that time before I remembered everything, that time when I was Rue!

And so she goes back to the advent of Rue – when she first met the Prince as a little girl.  The Raven got angry at her and apparently she ran away, pursued by the crows.  Mytho protects her (of course), and when he asks who she is, she’s reminded of all the horrible things her Father says about her.

But Fakir isn’t so eager to revisit who he used to be. Fakir: I will never go back, not to that time when I clung to my sword and said nothing but words that deprived Mytho of his freedom!

He’s spent the whole episode just trying to write something, looking for a way out of the pit Drosselmeyer wrote him into.

Princess Tutu: All of my feelings belong to me. All feelings are precious to whom they belong. And I am nobody’s marionette!

Fakir: I will no longer cower before fate!

Princess Tutu: Whatever it takes, 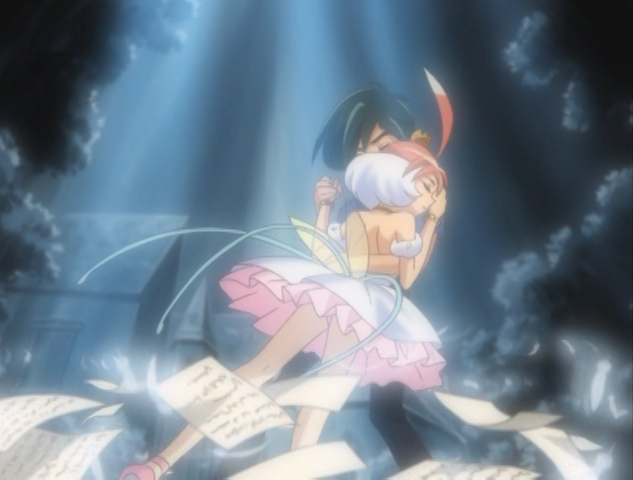 Fakir: That’s right…she’s changed me! I can write…I can write a story about her! But wait…these words, they’re not my words. What are they? […] These are all her feelings!

Fakir: Her feelings for Mytho are spilling up through my hand and out onto the page! At that time, the knight who had cast away his sword called her name in order to lead her out of the darkness! DUCK!

Thus Fakir brings his little story to a happy (and hopeful) close, but there’s still another Princess to be rescued, one who turns out to be “only human” after all. 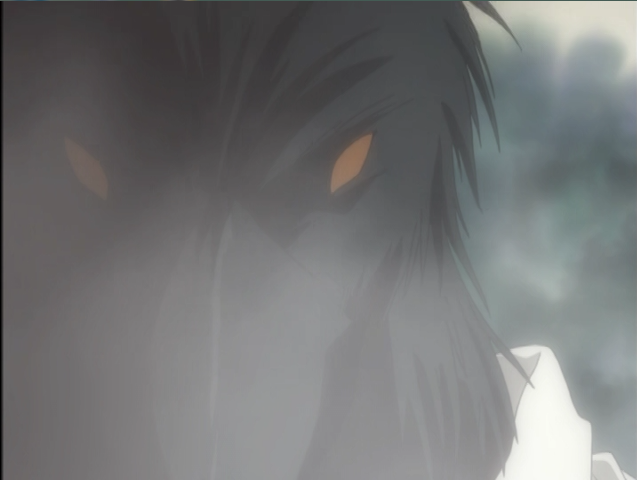 One thought on “Episode 23: Marionette”