Once upon a time there was a man who died. The story the man wrote was about a happy Prince who loved everyone and was loved by everyone. The people fought, each wanting him to love them and them alone, and an evil Raven pecked at the loving hearts of one person after another. The more the Prince loved them and tried to save them, the more the people’s love just fed the Raven. In the end, the Raven thought, “I’d like to try the Prince’s heart, the most delicious one of all.” 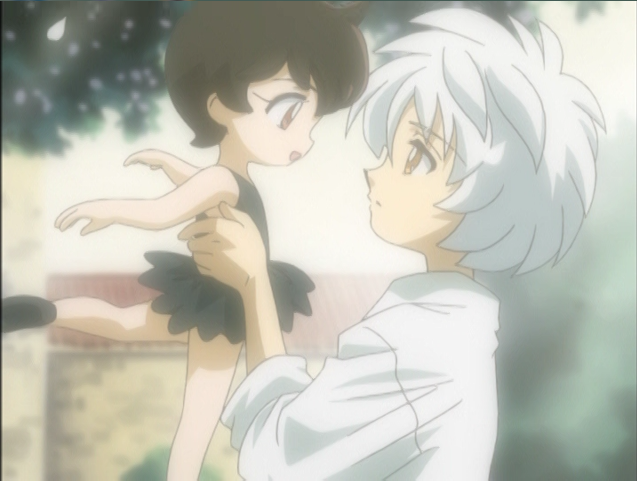 This episode offers a bit of a breather, allowing the viewer a bit of down time to absorb the aftermath of the events and revelations of the last episode.  The plot isn’t stopping, though – it’s just slowing down a little to make sure we’re all caught up. Fakir: All I want is the power to protect people; that’s it.

Now that he’s finally written a story, Fakir is only feeling more pressure.  Duck is under the impression that he can just write as he pleases now, but he’s actually facing bit of a conundrum.

Fakir:  Even though I couldn’t write one letter of a story about Mytho, I could write a story to save her as if it were flowing from me. But the story I need to write is about Mytho!

He regroups with Duck, and they discuss what to do next.  Duck decides to retrieve the heart shards in spite of the looming threat of the Raven, and just sort of assumes that Fakir will help with his writing and Mytho will go back to normal when he gets his heart back.  So Fakir seeks out Autor and whatever aid he might provide, which turns out to include a lot of bitterness and very little confidence in Fakir.

Autor: To be frank, you have no hope of rewriting Drosselmeyer’s stories at your level of power. If you’re only where the story is writing itself through you, then there’s no way you could make your stories reality.

Fakir: I’m aware of that. That’s why I’m asking you for your help, Autor. Rue: My love has done nothing but make you into this. I have no right to love you.

Rue has nothing.  It’s not so much that she’s lost everything as that she finally understands that she had nothing to begin with.

Rue: I’m a fool. There’s no way a mere human like me could marry the Prince from the story. Rue’s pas de deux is set to “Nocturne” by Alexander Borodin, which seems to be intended as a callback to the piece’s first appearance, in Episode 11 La Sylphide – where Rue first started meddling with the Prince’s heart.

Rue: I wanted you to look at me alone. I wanted never to be without you, not even for a moment. But you, you didn’t. There is one benefit to Rue reaching the end of her rope: She finally talks to Duck.

Rue: The Raven was using us to make the Prince give him his heart. That’s all he wanted! […]Listen to me, don’t do anything else! I’m begging you, please stop. If it were me, if I were Princess Tutu, I’d never give him his heart back.

Duck has power and Rue doesn’t.  But now that Duck is aware of how far gone Mytho is, that he might just give up his heart to the Raven, she’s unsure of how best to use that power. Cue Uzura.

It’s almost funny seeing Uzura’s childlike acceptance of the fact that she is somehow also a puppet named Edel.

Edel communicates that the final heart shard is Duck’s pendant, which she’ll have to give up in order to fully restore the Prince.

Duck: I get it, before the Prince shattered his heart, it was his will that he would someday get it back! […] My will is the same as Mytho’s.

That’s just the sign Duck needs to finally return the shards from the gates. She finds Mytho with Rue.

Mytho: Kraehe, dance with me. When I’m not dancing with someone, I’m uneasy and lonely, and it hurts so much I can’t stand it.

Rue: I’m sorry my Prince. You’re suffering because of the Raven’s blood. The hearts of these birds hurt people, even the people you love. The more love you have for them, the more pain you cause them. With my own hands I’ve thrown into chaos this heart of yours that loves everyone. Every part of this has been my fault, just because I wanted to have your love all to myself!

Even Duck is afraid of Mytho as he is now, but Rue never recoils from him.

Tutu returns the five shards, the Raven is released, and still the Prince hasn’t gone back to normal.

The Raven: I’ve raised you drinking my noble blood ever since you were a baby, but in the end you’re nothing more than a foolish human girl. It’s bad enough you couldn’t turn the Prince’s affections toward you like your blood demanded, but to think you succumbed to love! Then, when Mytho flies toward the jaws of the Raven, Rue finds that she does have something left after all.  The Raven may have taken away the power of Kraehe, but there’s one power left to her, one that the Raven couldn’t take away because it was never really his to begin with: Love.

Rue: No, let the Prince go! Don’t eat the Prince’s heart! Let him go and eat my heart instead! Please! I love you, my Prince! I have ever since I was little! I’ve always loved you!

No matter how helpless you are, no matter how little strength you have, as long as you have love, you can keep moving forward, if only at a crawl. Mytho: What is this feeling I have? This frail, earnest love…I must protect this love.

Rue is swallowed up by the Raven, surrendering her life for the sake of her Prince.