This chapter offers a little taste of what to expect going forward on several fronts.

This is Kagura Sohma. She is another member of the Zodiac and has some issues (mainly involving Kyo).

Shigure: That’s how Kagura expresses her love. It’s like when a little kid teases another kid they have a crush on.

Tohru: Really…? Um, but it seems like she changed into someone else…

Once she’s beaten Kyo to a pulp, she finally snaps out of it (Shigure and Yuki are more concerned about the hole she made in the paper doors).

Kagura: I’m sorry. I was so overwhelmed at seeing Kyo-kun that in my joy, I forgot my own strength.

It’s very apparent that Kagura’s feelings are selfish and one-sided, and honestly, she tends to act more as a gauge for Kyo’s character development than anything else.  She’s one of the simpler characters, and you could probably guess how she’s going to change in the future already.  She’s determined to marry Kyo, which leads to an interesting little tidbit about the Zodiac: Embracing a Zodiac member of the opposite sex doesn’t trigger a transformation.

While we’re on the subject, you may have noticed that Sohmas frequently refer to one another as “cousins”. They’re all from the same extended family, but none of them appear to be first cousins, although in Japan marriage between cousins isn’t all that taboo, anyway, and you can bet there was quite a bit of it going on within the family.  Personally I was never bothered by it, but if it bugs you…well, there are far less wholesome relationships still to come, so buckle up.

Shigure: But you like Kyo-kun too, don’t you, Tohru-kun?

Kagura reacts exactly as anyone would expect.  Shigure knew he was poking a hornet’s nest.

Kagura: But I won’t lose to you! No matter what obstacles stand in the way, the power of my love will overcome them! Tohru-kun, what do you like about Kyo-kun? For me, it’s everything! I love everything about him! The good things, the bad things…I accept them all! Even if he changed into his true form, I would accept that too – 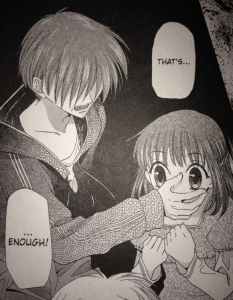 Kagura insists on staying the night, and Tohru discovers Kyo hiding out on the roof.

Tohru: I’m guessing training was hard? All by yourself…

Kyo: I wasn’t alone. I was with my master. […] My master is one of the Sohmas too, but he understands me. He’s a really strong guy who’s been teaching me martial arts since I was a little kid! Training in the mountains was tough, but every day was fulfilling. I could hardly wait for the next day to come.

Tohru (internally): This is the first time I’ve seen Kyo-kun as delighted as a child. He didn’t just do it to best Sohma-kun. He really loves martial arts. […] I’ve found another part of the real Kyo-kun. I saw the awkward smile hidden beneath his usual angry expression.

But of course Kagura can’t leave before Tohru discovers her animal!

Tohru: Shigure-san, I’ve got it! Kagura-san is the Year of the Boar!

This chapter made into the anime mostly intact (they still had to add a few scenes to pad it out), but there was a conversation between Shigure and Kagura that was significantly altered:

Shigure: Oh, even I’ve been jealous before.

Because Shigure is just an innocent little puppy dog in the anime.

Tohru: The remodeling is finished. I got a phone call from my grandpa today. (Internally) I had the wrong idea. I knew I was a freeloader at this house, and that I’d leave eventually, but I had this silly idea that I could become part of their family.