Sour Cream gets to sort out his daddy issues!

Steven: I’ve always wanted to be a roadie. Whether they’re lifting the heaviest equipment, fighting off crazy fans, or just offering moral support, roadies work behind the scenes to make all the magic onstage possible!

Sour Cream: I only really need the lifting, but I guess we’ll see what happens tonight.

Sour Cream: It is too a viable career! 80% of Germans make their living DJing. Why can’t you just accept that I don’t want to be a fisherman like you?

What’s interesting is that we’re literally only hearing one side of the argument, since Yellowtail is a Charlie Brown Adult.  We get the impression that he’s critical of Sour Cream because Sour Cream is interpreting his words that way, when being a DJ really IS a questionable career path.

Marty: So, this is where you work now, Starchild, a rundown old car wash? Guess the music biz wasn’t as good to you as it’s been to me.

Greg: Hey Marty, long time no see. This is my son, Steven. […] Anyway, things are totally fine here in old Beach City, but, uh, if you need me to wash that huge bus of yours it would probably help me out.

Marty: Listen, Starchild, I can do you one better than a car wash. You and I have some unfinished business.

Then Sour Cream reappears and recognizes Marty as his dad.

Sour Cream: What are you doing here?

Marty: SC! Just look at you. When’d you get so tall?

Marty: Sorry I been gone so long, but you know how the music biz can be, right?

Sour Cream: No. Can you tell me about it?

Marty: Hello! What do you got going on over here, my friend?

Sour Cream: Just getting ready to set up for this semiannual DJ night rave thing I do in Beach City.

Marty: A rave, you say? SC, I have a great idea. I’ve decided to hang out in Beach City and, uh, make up for lost time with you! And while we’re chilling, I’ll promote your little engagement. […] Man, you’re so lucky your dad is in the biz! Throwing a cool semiannual DJ rave thing is a classic father-son bonding experience!

Steven is wary of Marty, but he also doesn’t want to cast suspicion on his apparent attempt to connect with Sour Cream by doing something they both care about. 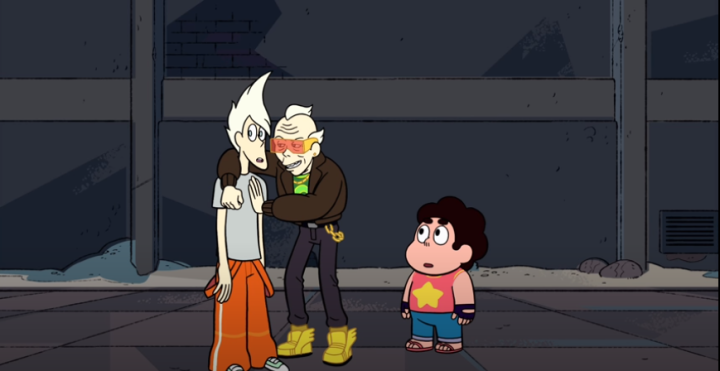 Marty: You want to hold them in your little hand, right?

Sour Cream: I guess so.

Marty: You want to squeeze them until their eyes pop out.

Sour Cream: Uh, you lost me a little.

Marty: What I’m saying is, if you want to bring people in, you can’t play out in the sticks! You gotta be where the people are!

He suggests setting up on the beach instead, at which point Steven feels compelled to remind Marty of the last time he set up a concert on that beach (and the utter commercial failure it was, regardless of the good things that came out of it).

Marty: Okay, can I realtalk with you for a second? Real talk. I made a lot of mistakes before when I was your dad’s manager and, real talk, I was a jerk. But, real talk, I’ve learned a lot about myself and the music business since then. So I can tell you, with certainty, things aren’t going to be like they were last time. Real talk.

Marty: That’s what it’s like to work with a professional, kid.

And all while Marty is hooking him up with ads and fancy equipment and professional roadies, Yellowtail is watching them from a distance…

Steven: Hey, Sour Cream! We’re ready to go whenever you are.

Sour Cream: Okay, I guess I’ll go out and get started.

Marty: That’s not how we do things in the music biz! Let a proper hype man set the stage for you.

Marty: How you feeling, Beach City? You know, I’ve always been someone with good taste, so you gotta believe, this show is special to me. It’s personal. Because I want to introduce you to a fresh, raw experience, to a whole new flavor, to a brand new…soda!

I know they sell some weird soda flavors in Japan, but guacamole seems like a stretch even by those standards.

Ronaldo: It’s not even good on chips!

Sour Cream is understandably upset about his gig being used as a marketing vehicle for Terrible Idea Soda. 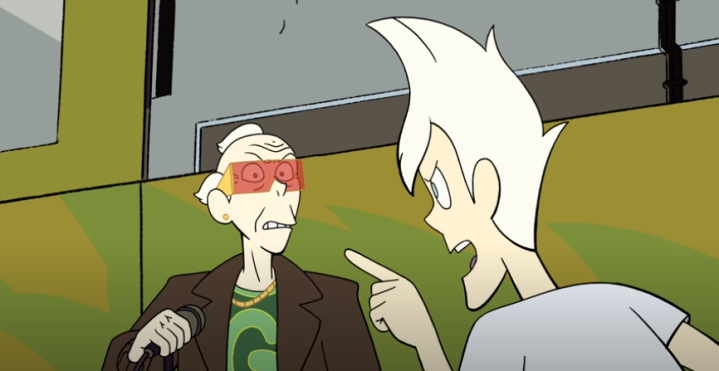 Marty: What are you waiting for? Start playing!

Marty: This isn’t your show. How do you think we had this setup? This party bus, these roadies…I’ve got a good deal with Guacola. You’re lucky I’m letting you in on the ground floor!

Sour Cream: But I thought this was about making up for lost time, not some lame soda!

It’s interesting to note that Marty never once calls Sour Cream “son”, or even Sour Cream, just “SC” or “kid” – while Sour Cream calls him “Dad” from the beginning.  He talks to him a lot like he talked to Greg back in the day, because he’s clearly only interested in exploiting a new talent, not getting to know him as a person, let alone being a dad.

Then Sour Cream starts chewing him out in Charlie Brownese, imitating the dad that has actually been there for him.

Marty: What did you say?

Then Marty hits the road, only stopping to hand Greg an envelope which he says he was legally obligated to give him (and was the whole reason he came to Beach City in the first place).

And then Yellowtail turns up.

Sour Cream: Aw man, it’s my stepdad! He was just waiting for me to fail so he could get me and put me to work on his boat. Fine, take me in your big smelly boat so I can fish my life away!

They’ve had their share of disagreements, but it’s obvious that Yellowtail actually does care about Sour Cream, he’s just more concerned about financial stability and such than his teenage stepson. 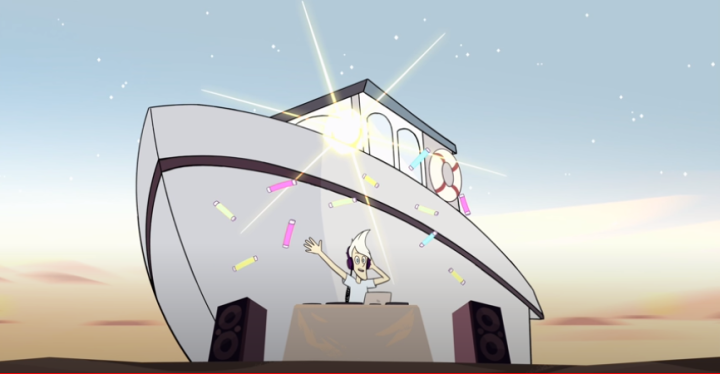 Greg: You know, the music biz can be really tricky.

Steven: I’m sure Sour Cream will make it big on his own.

Greg: Even if he doesn’t make it big, Sour Cream will be okay. As long as he’s doing something that makes him happy.

Then he opens the envelope…and finds a check for $10 million.  For the most part, in place of an overarching plot, this season just employs “hooks” like this for the next episode, and it helps to keep the pace up while still telling fairly episodic stories.