After a season or so that’s been light on the songs, the show goes all in for a full-blown musical episode and it is glorious.

We begin by explaining where all the money came from – Marty managed to sell one of his songs as a burger jingle, because of course he did.

Greg: You know when Rose came to my concert, the night we met? I was playing this song!

Pearl: This is what did it? Burgers?

Greg: It wasn’t about burgers back then. She probably would’ve liked this, though!

Pearl: Oh, she would’ve loved it…

Because apparently Rose had a weird sense of humor.

Then the opening number is all about Greg trying to decide what to do with all the money, and it’s honestly kinda relatable for me.

Steven: You could buy a house, and a car
Greg: I guess that I can, but I’ve already got a van
I could put you through college
Steven: But I’m with the Gems all the time
Greg: I could buy you all the finest courses online!
Steven: What if we took a trip?
Greg: You think?
Steven: Yeah I do!
We could take a vacation
We could go somewhere new!

Approximately 80% of the dialogue in this episode occurs in/during the songs, because why not?

They quickly settle on Empire City as their vacation destination (still in song). 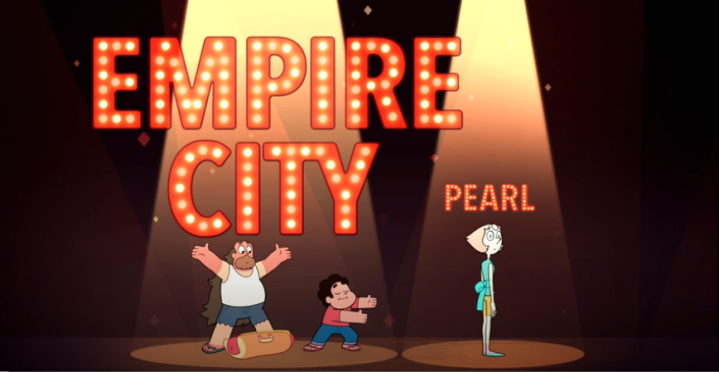 Greg: Steven, me and Pearl haven’t gotten along that well since, uh, well, since I started dating your mother.

So that would be a “never”, then.  But of course Steven isn’t one to accept an unfortunate situation just because that’s how it’s always been.

I love how he takes an awkward situation and manages to make it MORE awkward.  And still be completely adorable.

Thus we finally get Pearl’s Roadtrip With Steven!  Amethyst had hers hobo-style with just Steven (although she did get an episode with Greg, too), and Garnet’s was actually about Garnet rather than her relationship with Greg, possibly because she was the only one of them who never seemed to blame Greg about Rose.  This time around, Pearl and Greg’s relationship (and in turn their respective relationships to Rose) is kind of the focal point.

The title song, “Mr. Greg”, is the big production number, but honestly it’s the least memorable.  The best part is the old school tap-dance-break toward the end.

Pearl: This city has its charm (unlike that termite-ridden barn)
And any time with Steven makes for a delightful evening!
Greg: You’re having fun!
Pearl: More or less
Greg: So dance with me! Just say-

Greg: Don’t worry about it, kiddo. It’s always been this way.

Thus we come to the heart of the episode: Pearl’s best song, and one of the greatest in the series.  And of course it’s a ballad about Rose.

I was fine with the men
Who would come into her life now and again
I was fine, cause I knew
That they didn’t really matter until you
I was fine, when you came
And we fought like it was all some silly game
Over her, who she’d choose
After all those years I never thought I’d lose

War and glory, reinvention
Fusion, freedom, her attention
Out in daylight my potential
Bold, precise, experimental
Who am I now in this world without her?
Petty and dull, with the nerve to doubt her
What does it matter? It’s already done
Now I’ve got to be there for her son

Although it has been heavily implied in some previous episodes, this is the point at which it’s undeniable that Pearl was in love with Rose (even though she stops short of saying so).  That certainly explains why she thinks her relationship with Rose was so special (even after she “chose” Greg), but it also casts a different light on her relationship with Steven: She’s the good Snape. (Harry Potter spoilers in the next paragraph)

There’s an archetype that I’ve noticed more and more since the turn of the millennium where someone was in love with the child protagonist’s mother before she got married/in a relationship with someone else and is haunted by her death even though she “chose” someone else.  Severus Snape is the best-known example (although Lemony Snicket from A Series of Unfortunate Events turns out to have the exact same backstory, minus the potential treachery), but I still found it difficult to like him because although he was technically looking out for Harry, he still often treated him unfairly, and I don’t care how much Harry reminded him of his father who used to bully him, he’s an ADULT and Harry’s his STUDENT, he shouldn’t be so petty.

Honestly, the main difference between Pearl and other examples of this character I’ve seen is that she’s actually part of Steven’s life!  She may not have liked Greg, but she was willing to put up with him because that’s what was best for Steven.

But it turns out that Greg and Steven were actually awake during that whole number (although it’s not clear exactly how much of it Greg heard), making things awkward once again!

Greg: Nothing’s gonna fix this, is it?

Greg: Sorry you had to be around me.

Pearl: I shouldn’t have come along.

Steven: No. This is exactly why I brought you.

Because Greg and Pearl cooperating is good, but actually getting to know and appreciate each other is better! 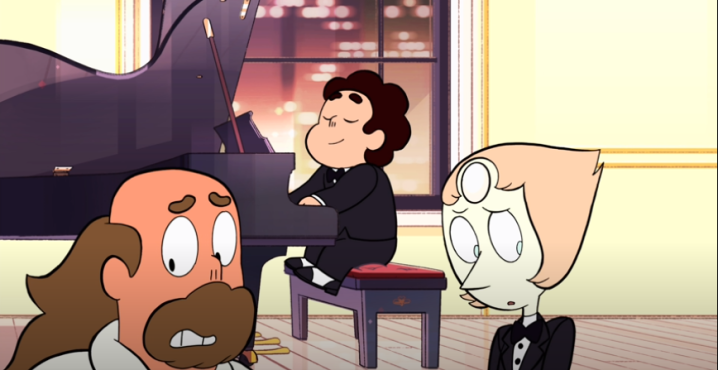 Steven is just too precious.

Pearl: I don’t hate you.

Greg: But, I knew how you felt about Rose, and I stayed anyway.

Pearl: That wasn’t the problem.

Greg: Then what was?

Pearl: She fell in love with you.

She always did what she wanted.

Of course, the unspoken part is that they both loved Rose, too, and maybe, just maybe, having somebody to talk to will finally help Pearl move forward.

And then when they actually dance, Pearl takes the lead part.

Then they get the bill, and Greg decides to cut their vacation a little short.

Greg: I’m surprised you remember any of it.

Pearl: What can I say? It’s catchy.

These people really get musicals.  It’s not just about catchy tunes (although that’s always helpful) – what makes you remember a song is more often the feelings behind it, and this show is all about the feels.  So if you’re gonna do a musical, might as well delve into a character’s psyche!

It is over, until next time…