With Lapis and Peridot finally settled in, Steven gets to return to normal…but the new normal includes discovering new powers and struggling to control them.

They’ve been staying at the barn for a while (as the ending sequence cutely reminded us), and home hasn’t been totally unchanged.  The first thing they notice is that all the food has gone bad, and the second for Steven is that the Big Donut apparently closes earlier.  But it’s not all bad changes!

Sadie: Well, if you’re dead now, I guess you can’t come by tomorrow.

Steven: I won’t be dead then! What happens tomorrow?

Sadie: If you didn’t know, we started baking our own donuts after that safety lawsuit got thrown out. So if you get here right when the shop opens, you can have the very first fresh donut of the day.

Steven: What an honor. First thing tomorrow, I’ll be here right when the store opens to taste your first delicious donut of the day! 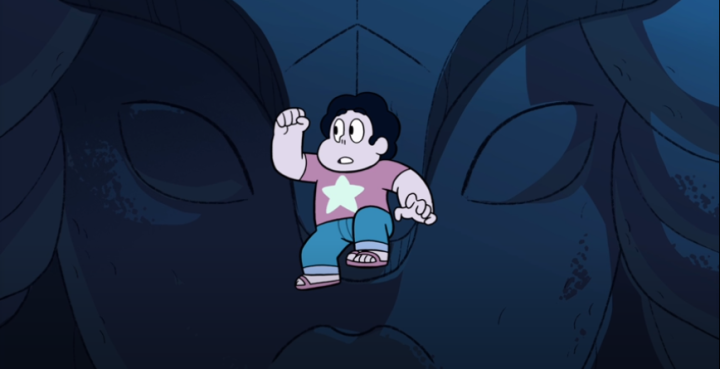 At which point he discovers that he can jump really high (and float down at a leisurely pace).

Steven: Oh my gosh, this is a new power! It’s like I’m super light. I can jump really high and float down really slow!

But then he realizes that he jumped a little too high, like out of earshot of the people on the ground, and he’s not entirely sure how long it’ll take for him to float down.  So when Amethyst shows up, he gets her attention by throwing his sandals at her.

Amethyst: Oh, there’s Steven. Just flying around. Wait, can Steven fly? Yeah, think I remember that…no no, I’m thinking of Lapis! Hey Steven! How did you learn how to fly? 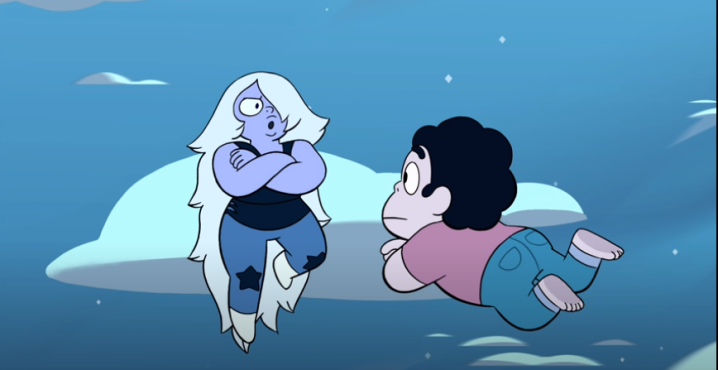 Steven: Amethyst, I need you to- dang. Too slow. Better ask quicker.

Steven: I could really use your assistance dealing with the sudden appearance of- aw rats. Of a power which previously was unbeknownst to me which I can’t control-

Since Steven does have his phone on him, Garnet decides to steal (borrow?) a phone from the nearest car in order to communicate with him.  Because she never did care much about property damage.

Pearl: Steven, are you okay?

Amethyst: See? He’s got this.

Steven: Not exactly. I think this is some kind of new power.

Garnet: Rose could regulate the speed of her descent. […] Steven, try falling a little faster!

Steven: I can’t figure out how, and it’s taking forever to reach the ground. Can you keep me company until I land?

Best guardians a magical boy could wish for.

This sequence confirms that the other Gems can jump just as high, but without the floating – which is actually quite convenient for Steven, considering that a fall from that height at normal speed might very well kill him (it would certainly kill a normal human).

They’re out all night, and Steven still has quite a way to fall when his alarm clock goes off to tell him to get up and go to the Big Donut for that precious first donut of the day.

Steven: Oh, nuts! My donuts! Guys, I need to get down right now!

Steven: Nothing seems to be working. Is there anything else you can put on me?

Steven: It’s past seven. Thanks for trying, guys, but there’s no point anymore.

Garnet: It wasn’t meant to be.

Steven: It was too meant to be. My first day back and it’s already ruined. 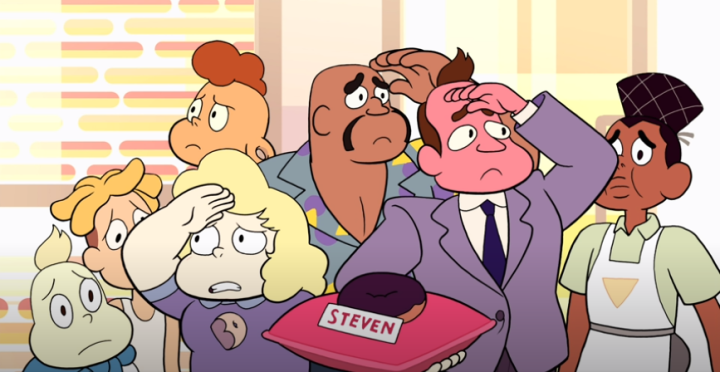 Steven: They’ll say, “Where’s Steven? We saved a donut for him.” But they won’t see me, because I’m in the sky. And then, they’ll feed my donut to a dog. And then I’ll die.

Because he is still a kid, after all, magical destiny or no.

Then he starts actually falling! 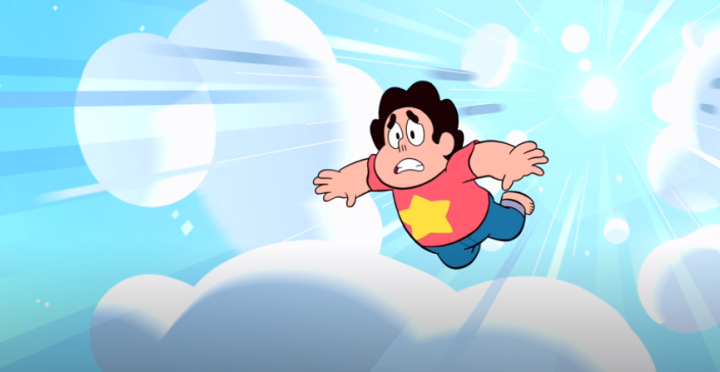 Steven: Why do my powers keep coming and going? I was just so happy to be home- wait! That’s it! My floating power’s tied to my emotions! Right, just like all my stupid powers! Okay, right, I can control this! I just have to think happy thoughts and no negative thoughts. So what makes me happy? Donuts? No, I’m not gonna get any. The beach? No, that’s where I’m going to die! Mom? Oh geez, those feelings are complicated. Come on, come on, brain, time’s running out! I just need something that makes me happy, something that I can always depend on to cheer me up! My guys. They spent all night with me just to keep me company! No matter how much I mess up, they’ll be there to help me.

This kid is a treasure.

His landing isn’t as graceful as could be wished, but at least he’s unhurt, so Garnet tells him to run to the Big Donut.

Pearl: I would’ve liked a hug… 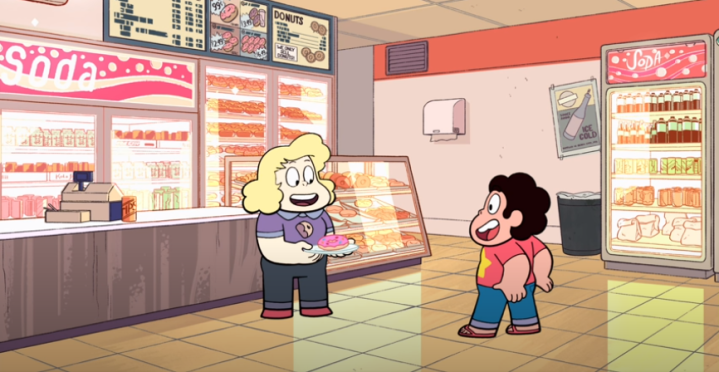 Steven: You’re just opening? I thought I was late!

This was a nice return to the old episodic formula – nothing special, just hanging out with Steven and the gang, with some silliness and some sweet views.