In which we begin the tradition of Steven discovering his latent psychic abilities in his sleep! 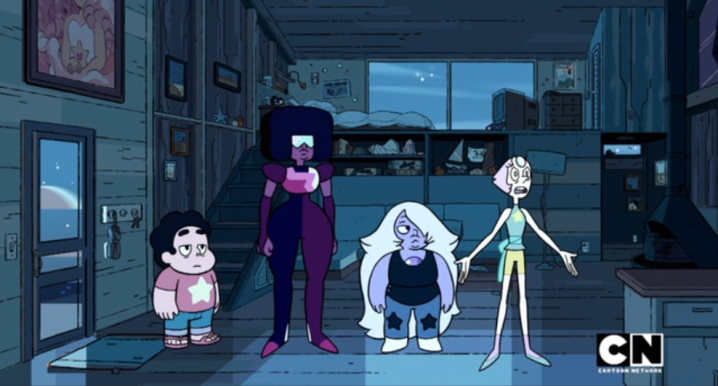 Steven: Is Lapis gonna be okay?

Garnet: She had control when she used her power to drag their fusion into the ocean. But, a fusion like theirs is unstable, bound together by anger and mistrust. If that bond snaps, their anger will take over and destroy.

Poor Steven is still really worried about Lapis, so he’s been joining the Crystal Gems on their excursions to search for Malachite…but the search is taking a toll on all four of them. 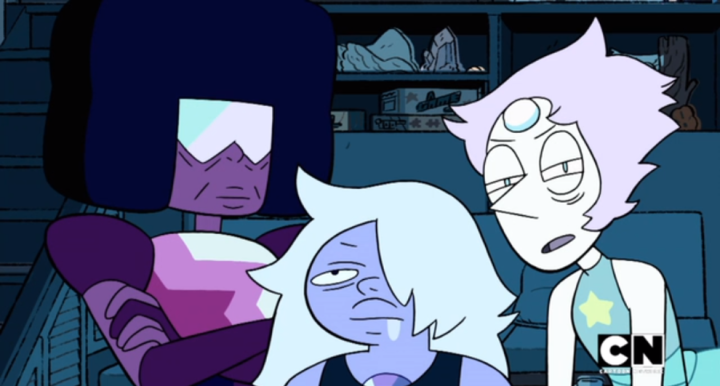 Steven: Don’t you guys need rest too? You look exhausted.

Steven: Look, you can’t really not sleep until you try it! Maybe we can throw a little fun into the mix with…a slumber party!

Steven: Yeah! All of us, peacefully dozing off! It’ll be like there isn’t a vengeful fusion boiling the ocean with hatred!

I’d ask how Steven fundamentally misunderstands the purpose of a slumber party (everybody knows they’re about staying up talking all night!), but it’s pretty clear he’s never had one before (unless you count that time he and his dad got snowed in at Connie’s place).

Anyhow, Garnet orders Pearl and Amethyst to stay and rest with Steven while she continues the search. 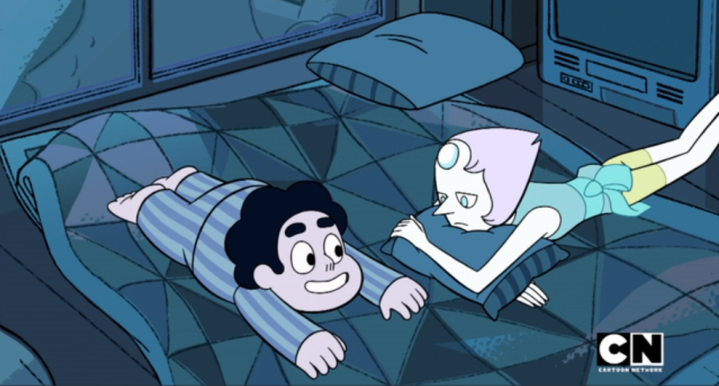 At this slumber party at any rate, part of the point is just teaching Pearl how to sleep (since she hasn’t before).  The rest consists of a series of dream sequences! 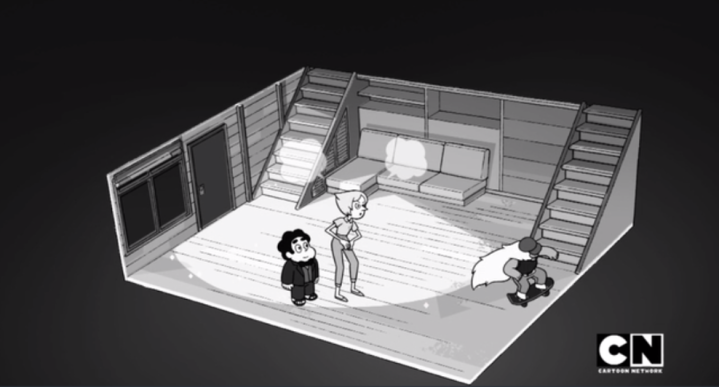 Steven’s first dream is just the characters transposed into a sitcom universe, where Pearl serves as the mother, Amethyst serves as the rowdy teen, and Garnet serves as the…cool uncle?  Garnet also delivers the title drop, which apparently just means “chill time” in Norwegian.  No, I don’t have a clue what that’s supposed to indicate. 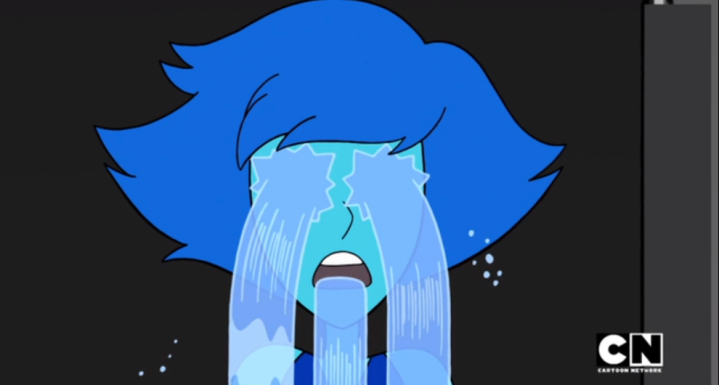 Then there’s this, which scares Steven awake.  And apparently old habits die hard, as he wakes up to find Pearl staring at him again. 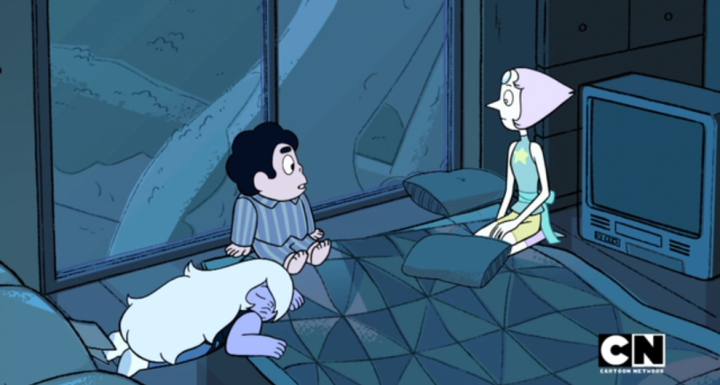 Steven: Oh man. I fell asleep and had this weird dream. I opened the door and Lapis was there and-

Pearl: Well that doesn’t make any sense. Lapis is fused with Jasper at the bottom of the ocean.

Steven: You’ve never had a dream before, huh?

Steven: Well, Pearl, dreams don’t always make sense. When you dream, the thoughts in your head get all mixed up into a weird movie. And they’re really hard to explain, which is why they’re boring to listen to.

Then he finally succeeds in putting Pearl to sleep by describing a dream to her, before dozing off again himself.  Thus begins a fairly standard dream sequence involving Dogcopter…until it’s not. 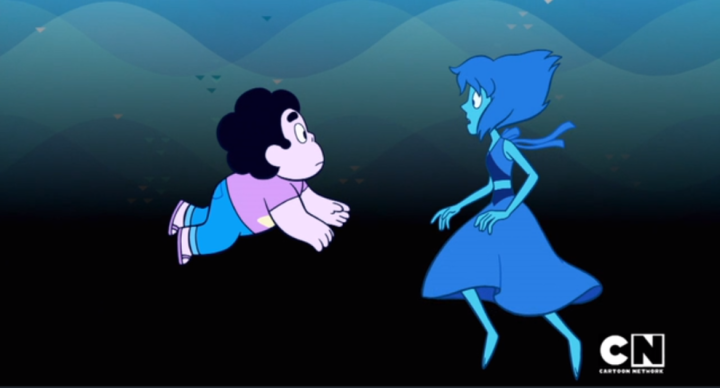 Lapis: Steven, what are you doing in here?

Steven: I know it’s weird, but I’m just dreaming, so don’t even worry about it.

Lapis: What? No! Steven, I’m trying to concentrate! How are you here?

Steven: Oh my gosh, are you okay?

Then he wakes up again. 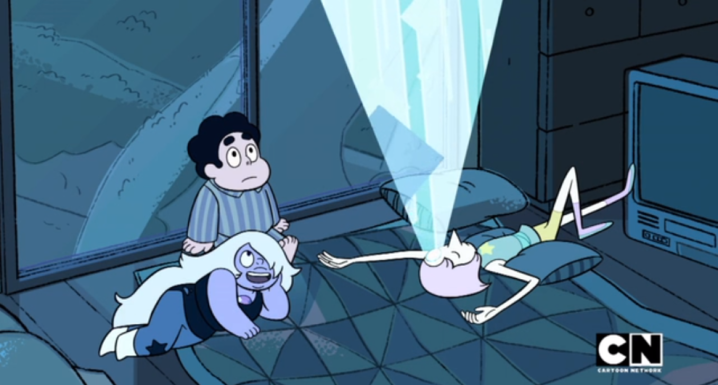 Apparently Pearl projects her dreams when she’s actually sleeping, and Amethyst finds much amusement in them.  But Steven doesn’t waste much time waking her up and telling them about his latest “dream” of Lapis.

Steven: I think I was talking to her.

Pearl: Wait, how do you know?

Steven: I don’t, but I could just feel it. She was yelling, she was really freaked out.

Pearl: What did she say? Is she still in control?

Pearl: Steven, you could be using your dreams to connect with her mentally.

Amethyst: Can you do it again? Maybe Lapis can just tell you where they are.

Steven: I guess I have to go back to sleep.

What’s really interesting is that there’s no indication Rose ever had psychic powers like this – although she presumably didn’t sleep much, either. 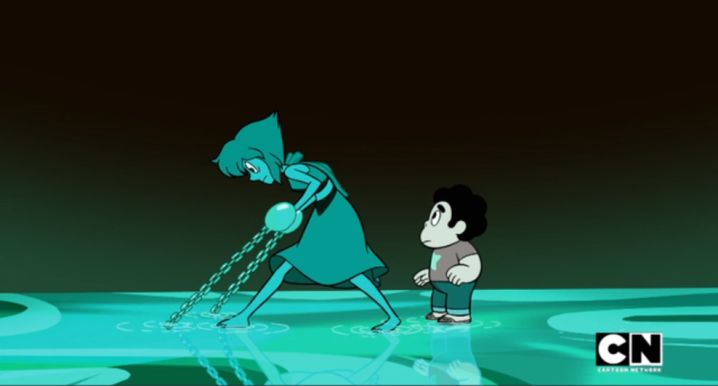 Lapis: Steven! Why do you keep coming back? I can’t get distracted, I-I’ve got to hold us down with the weight of your planet’s ocean, I’ve got to keep her…

Steven: Wait, Lapis, tell me where you are! We can help you!

This breaks her concentration, and she gets pulled under… 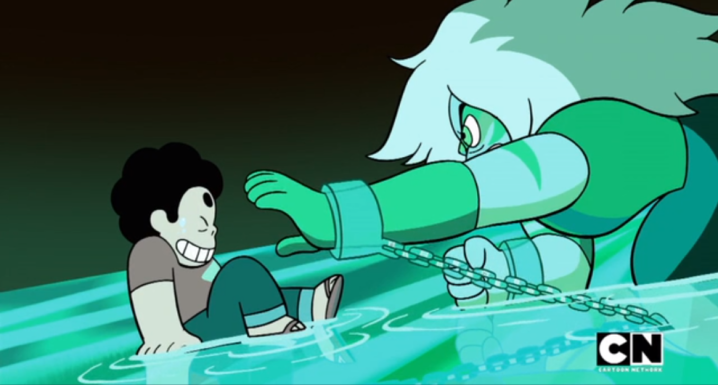 This show is pretty great at creating vivid mindscapes.  This one’s pretty stark and barren, but that’s kind of the point.

Lapis does manage to reclaim control before we can find out what happens to Dream Steven when he grapples with Jasper. 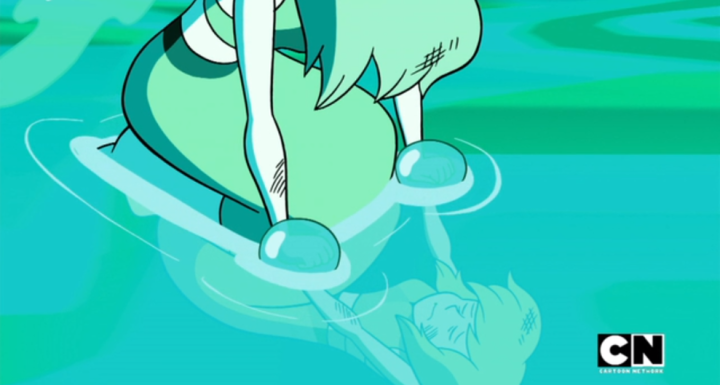 If the Crystal Gems are exhausted from searching all this time, poor Lapis has been fighting all that time, with no end in sight.

Lapis: Can’t you see? I can’t stop, not even for a second. Don’t look for me! I don’t want your help.

Lapis: Just let me do this for you! 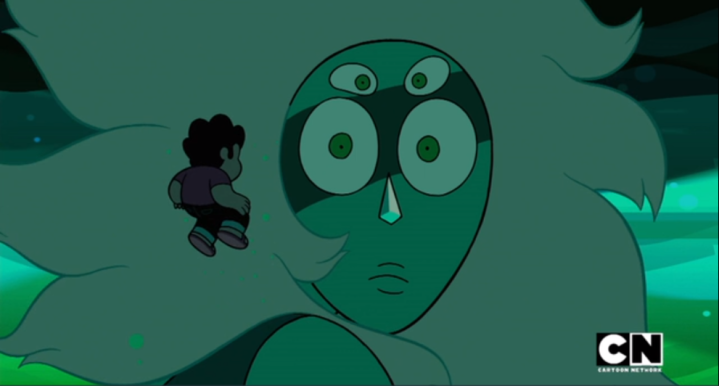 WHY DO YOU DO THIS TO ME?

The whole “Let me do this for you” thing is clearly an echo of the martyrdom Pearl espoused earlier in the season, and if Steven had the chance, obviously he’d dispute it here, too.  What’s interesting is that the emotional logic behind it is significantly different from Pearl – where Pearl seemed to be acting out of a lack of self-worth, Lapis is in her predicament largely because she doesn’t trust the other Crystal Gems (somewhat understandably).  She’s been trying to protect Steven, the only person who’s really listened to her in who knows how long, but she’s been alone for such a long time that she doesn’t seem to know how to trust anyone else anymore. 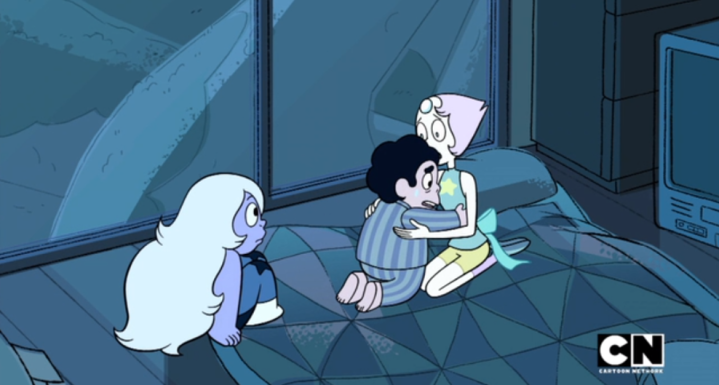 Steven: She’s still fused and she’s still in control, but I don’t know for how long…

Then the episode ends rather abruptly when Garnet returns and tells him there’s nothing more they can do at the moment, and you see what I was talking about with the pacing?  Considering all the character development that’s been going on, the show really could’ve used some actual “chill time” at this point in the story, but this season seems determined to move the plot forward every episode, if only by inches.  The tension just keeps building and building, but I prefer Regular Steven to Serious Steven.