Greg meets Stevonnie, spurring a surprising story about him and Rose. 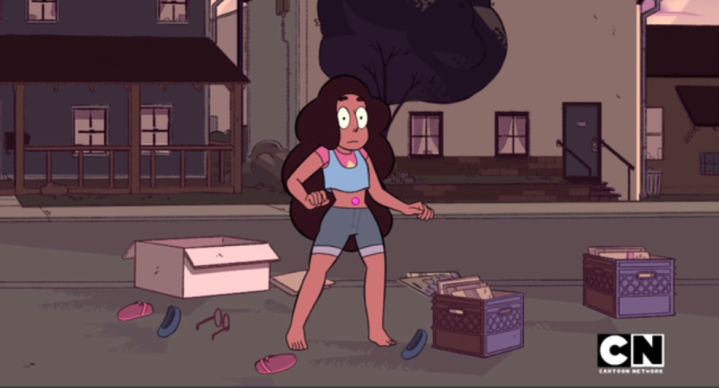 First of all, YAY STEVONNIE!  They just spontaneously fused when they were dancing to a retro record and it is adorable.

Greg: You two can fuse?

Greg: That’s incredible! Since when? Wait – how is this even possible?

Steven: The Gems think it’s cause I’m half human.

Connie: Please don’t tell my parents, Mr. Universe! They don’t know I’ve been doing magic stuff with Steven. I can’t tell them – they’re not going to understand, I-

Greg: Woah, woah! It’s okay. I might be the only human being on the planet who’s gonna understand.

Connie: What do you mean?

Steven: Yeah, what do you mean? 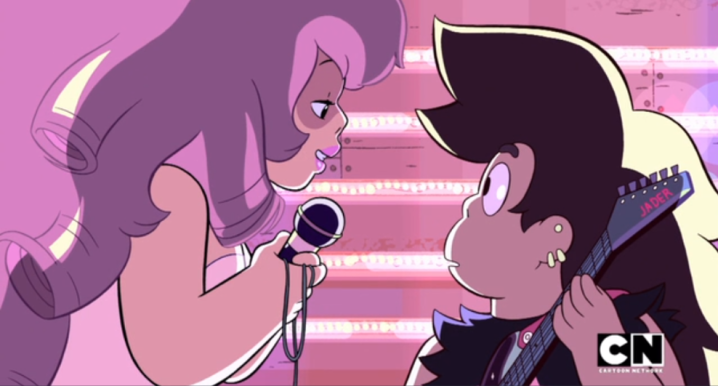 So you know how I said before that Rose was my favorite character?  Well, if you’ve read my previous series, you may have an idea why, because it’s the same reason I love Rue, Kureno, and (to a lesser extent) Faramir: I kinda really relate to her.

You’re a man, you are so much fun
I hadn’t planned on finding you quite this entertaining
I like your band, and I like your song
I like the way human beings play
I like playing along.

Rose used the word “playing” in “Story for Steven” too, and she’s constantly using words like “fun” and “cute” to describe Greg.  While “playing” might be referring to “playing music”, it’s also clearly meant to indicate that she sees their relationship like some sort of game, with her almost treating him like a pet sometimes.

But game or not, Pearl isn’t happy about their relationship, so she tries a little power play. 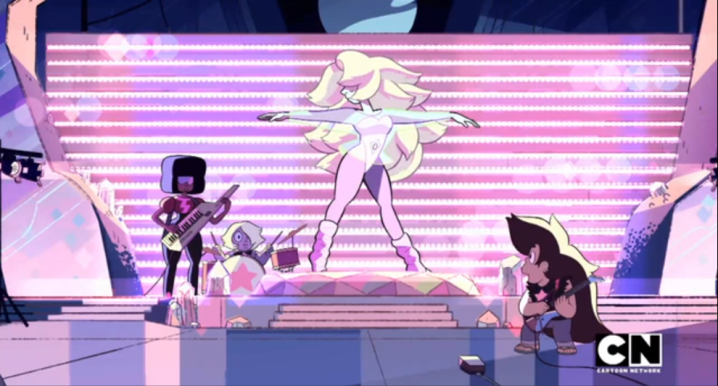 Namely, fusing with Rose (ostensibly to give some flare to the music video).

Rose: That was Rainbow Quartz. Pearl thought a fusion might give your video a little something extra. Pretty cool, right? I have to go, but are you doing anything later?

Then Pearl moves in for the kill.

Pearl: You’re just a phase. You know that, right?

Greg: No. I actually don’t know that, Pearl.

Pearl: Well, of course you don’t. You don’t know anything about Rose.

Greg: I know she’s super into me!

Pearl: Listen Mr. Universe. Rose may find you charming, but that’s only because you’re human. You’re a novelty, at best.

Greg: What makes you so sure?

Pearl: Oh, it’s very simple. Humans can’t fuse. Fusion is the ultimate connection between Gems – and you are not a Gem.

Greg: Well, has any human tried fusing with a Gem?

In one aspect, at least, Pearl seems to have a point: Rose can’t (or won’t) connect with Greg as a human in the same way she can with other Gems.  Physiological differences aside, she’s keenly aware of his relatively short lifespan.  But then, we also know that Pearl’s “ultimate connection” wasn’t actually as complete as she thought… 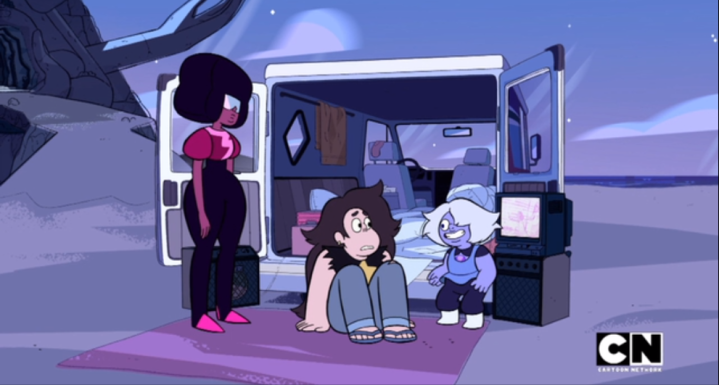 The other Gems do offer Greg some fusion advice, though (that is, mostly Garnet, who clearly supports his relationship with Rose).

Amethyst: Sh! Come on, I still wanna see him try!

Greg: So it’s true, I really can’t do it. I’m kidding myself with this – I’m never gonna be a Gem.

Garnet: […] Let me tell you something, Mr. Universe. I think you can do it. But it won’t work if you dance like Pearl. You have to dance like you. You have to fuse your way. Get open. Get honest! Invent yourselves together. That’s fusion.

Where Pearl focuses on the physical aspect of fusion (largely as a way to discount Rose’s relationship with Greg), Garnet has a much broader view.  You don’t need to share a body with someone to share their pain, joy, and other experiences. 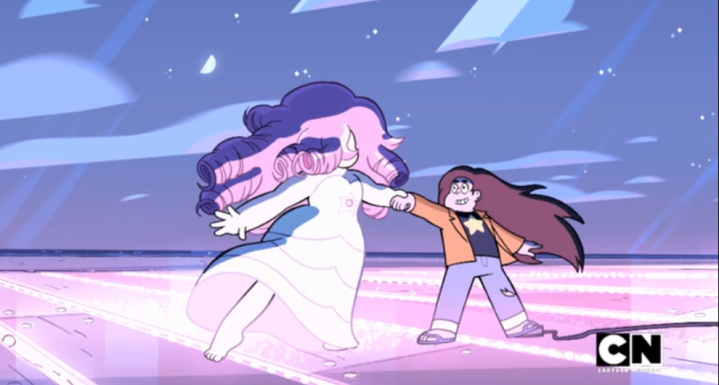 So Greg sets up a very 80’s dance floor for a very romantic dance…but of course he doesn’t fuse with her like he wants to.  And when she hears about it, she starts laughing.

Greg: I know! That’s the problem! I’m just a human…

Rose: That’s not a problem! I love humans, you’re all so funny!

Greg: Look, these last few months have been great- […] but I’m getting a little worried about the future…

Greg: I’m starting to wonder if you…respect me?

Greg: Rose, please! Can you just talk to me for one second like a real person?

They’ve been “dating” for months, but they still seem to know as little about each other as the day they first met.  Rose enjoys “playing” with him, but doesn’t really want to let him close enough to touch her heart, since she knows how easily such “toys” can be broken.  She’s accustomed to instability, and that’s just how she learned to cope with it: Keep everyone at arm’s length to lessen the pain of losing them.

Greg: Oh boy. This is so weird. You really are an alien.

Greg: How are we gonna make this work?

Rose: What do we do now?

Greg: We really rushed into this…

Rose: Everything on Earth seems fast to me.

Greg: Do you miss your home planet?

She’s just been play-acting up til now, but Greg doesn’t want a superficial relationship, he wants someone he can love and respect who will love and respect him, too.  From the start their relationship was lopsided, not unlike her relationship with Pearl – it’s not that she didn’t love either of them, but that their loves were so much more passionate than hers.  Part of it is that she’s afraid of loss, but she also has parts of herself that she wants to keep hidden – she’s also afraid of rejection. 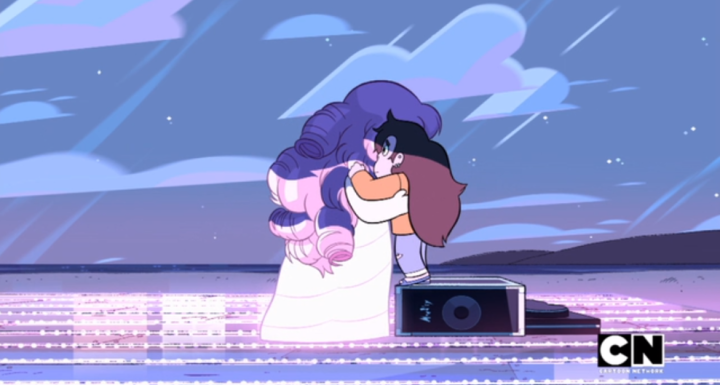 Greg: Have you loved other humans?

Greg: Have you ever been…in love with a human?

Rose: How would I know?

Rose: Is this torture?

Rose: What? Why not? I’m so confused!

Rose: Well, this is good. We’ve got one thing in common.

And of course the others are watching it all, because apparently Gems have no sense of privacy.

Pearl: Why are they still dancing? It didn’t work!

Amethyst: I think this one’s my favorite.

Pearl: I think he’s her favorite, too. 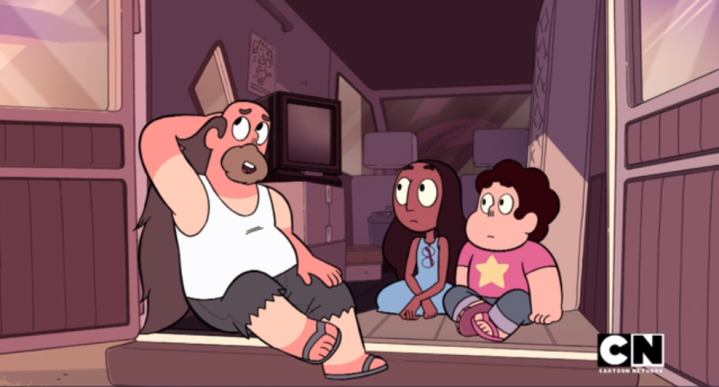 Connie: So you guys were never able to fuse?

Greg: Ah, no, but that wasn’t as important as talking to each other. Look, humans and Gems – it’s still some pretty new territory. You’re gonna have to work it out together. And Connie, if you ever need to talk to another human being about this, you can always talk to me.

I love the unique perspective Greg has on Rose – he may never have known all her secrets, but he seems to have a much more holistic view of her than any of the Crystal Gems.  He loved her, but he had to struggle to make her recognize him as an equal.  They had to be vulnerable with each other – and in the end, maybe that’s what fusion is really about.