We get quite a lot of discussion of about fusion, with somewhat mixed results.

Garnet: We need to track down Peridot. We found her pod, we know she’s out there somewhere. She came to Earth with a job to do, and odds are she’s still gonna try to do it. That’s why I’ve gathered you here.

Steven: I thought it was so you could help me fold all this laundry. […] Hmm…this is a lot. I bet this folding would go a lot faster if Ruby and Sapphire were here!

Garnet: I’m sure they’d be glad to see you, Steven. But I’m not unfusing for laundry.

It’s interesting how Garnet and Pearl seem to have completely contradictory views on fusion – Pearl generally considers it a last resort, while Garnet seems to think of unfusing as a last resort.  Part of it is pretty obvious – Ruby and Sapphire seem to always be on the same page and are generally happier together, anyway.  Pearl just doesn’t have a partner like that.

Anyhow, they (by which I mean mostly Garnet) conclude that Peridot will probably try to reactivate the Kindergarten, so they head off to intercept her.

Peridot does have some pretty great faces.

Of course Steven doesn’t try to attack her, but the other Crystal Gems have no such compunctions.

Peridot: You Crystal Clods! Go ahead, wreck this place! See if I care, I already got what I needed.

Amethyst and Pearl chase after Peridot, but Garnet notices that she didn’t appear to actually reactivate the place, so she and Steven investigate the control room. 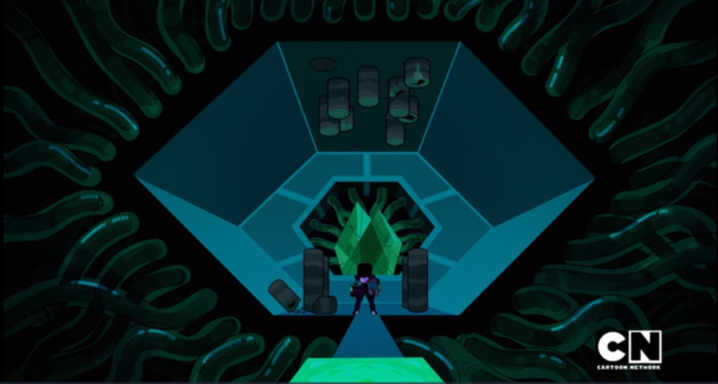 Steven: Is it cause you’re a fusion?

Garnet: I have to keep some of my secrets.

Steven: Aw, please! I wanna know! Is the strong part of you Ruby and the wise part of you Sapphire?

Garnet: It’s all of both. When two Gems combine, it creates something greater than the sum of their parts. That’s why I’m so great.

Thus far the fusion stuff has been pretty intuitive as some sort of relationship metaphor…and then things get weird.

And also kind of creepy.

This whole scene is sufficiently creepy, and the things are made even more imposing by Garnet’s abject terror.

Steven: Garnet? Uh, Garnet? What do we do? Please, talk to me!

Garnet: These were Crystal Gems, shattered into pieces. They were buried together…

Steven: Why aren’t you moving?

Of course she eventually manages to pull herself together and (rather violently) poof the thing, but she’s still obviously shaken – so much so that she starts Gollum-speaking.

So, to recap, Homeworld took whatever Crystal Gems they could find, shattered them, then forced all the shards together until they turned into these unholy abominations.  Yeah.

Garnet: We need to poof and bubble all of them. We can’t let any escape.

Steven was the only one around to witness her breakdown, and considering how unnerved she was, she probably didn’t even discuss her discovery with the others for a while.

But Steven’s always there to lend an ear if he thinks it can help.

Garnet: I wish you hadn’t seen that.

I feel like the more technical this show gets, the more its metaphors kind of break down.  Like, if fusion is supposed to represent bonds/relationships, what on Earth are these not-fusions supposed to be?  Just creepy imagery?

Steven: What’s it like being a fusion? […] I mean, like, all the time. Do you forget who you used to be?

Garnet: You forget you were ever alone. You know, when you fuse, you don’t feel like two people. You feel like one being. And your old names might as well be names for your left arm and your right.

Steven: When you split up, is it like you disappear?

Garnet: I embody my – I mean, Ruby and Sapphire’s love. I’ll always exist in them, even if I split apart. But the strength of that love keeps me together, so I can stay Garnet for a very long time.

Steven: That’s why you’re so great!