The story kicks off when Peridot hijacks the airwaves with a message intended for Homeworld, and the Gems (rightly) assume that she’s broadcasting from the Communication Hub, AKA the thing Sugilite destroyed last season.

So Steven naturally suggests they form Sugilite again to destroy it again.

Amethyst: Yeah, well, it’s up to Garnet, I guess. What do you say? Shall we mash it up?

Amethyst: But don’t we need to be huge like last time?

Garnet: Last time was a disaster. Last time we fused, Sugilite went berserk. It’s because of her that we can’t warp here anymore! I can be brash, you can be reckless, and we can both get carried away. So, for the time being, Sugilite is benched. What we need now is to be careful.

Yeah, they all had to ride there on poor Lion this time…and although Amethyst doesn’t complain about it (and Garnet tries to take her own share of the blame), it’s pretty clear she takes the moratorium on Sugilite personally. 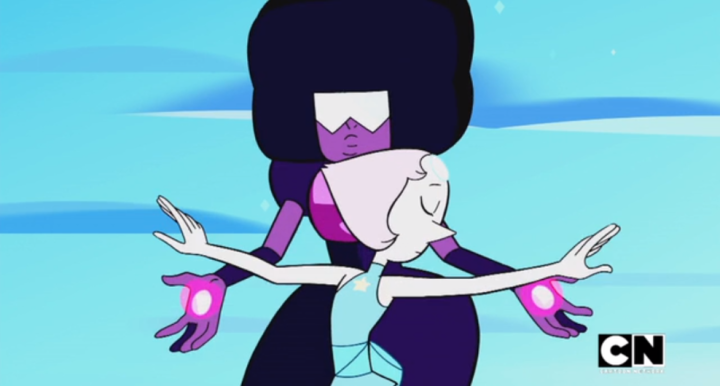 So we finally get to meet Pearl and Garnet’s fusion: Sardonyx. 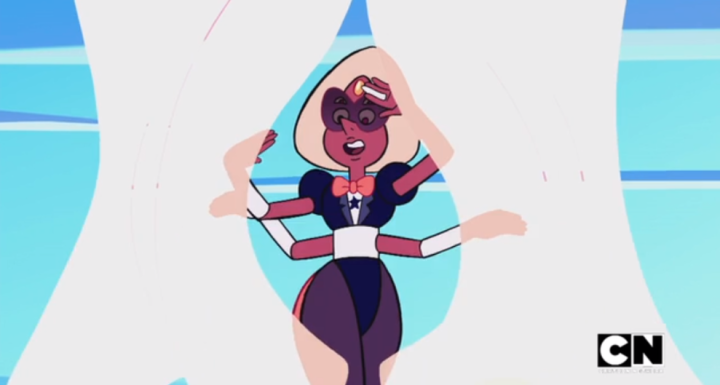 Sardonyx: Good evening, everybody! This is the lovely Sardonyx, coming to you alive, from the soon to be former Communication Hub! How are y’all doing tonight?

Fun fact: Sardonyx was once believed to bestow the gift of eloquence.

Sardonyx: Oh my stars, if it isn’t Steven Universe! We finally meet. So, what do you think? Was I worth the wait? What am I saying? Of course I was!

Sardonyx: Well aren’t you the sweetest little charmer? I could squish you right now – it would not be hard! […] Sorry, I’m just, so excited to be here! I haven’t exactly been myself lately. 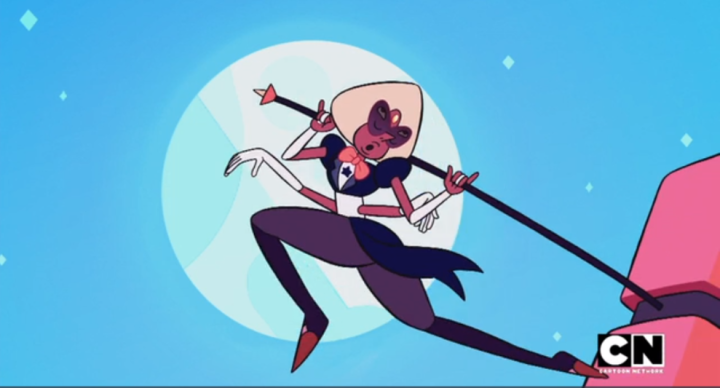 She’s basically the polar opposite of Sugilite – all stylish grace and precision (not to mention a lot more talkative).

Steven: You guys were amazing!

Pearl: We were? Well that’s good.

Garnet: We were awesome!

Pearl: Why don’t we do that more often?

The show is trying to be meta with the whole “Crying Breakfast Friends” cartoon, but it really doesn’t work.  The only time it DID kinda work was the personality quiz thing.

Anyhow, there’s another TV disruption the next day, and once again they travel to the Communication Hub and discover it up and running. 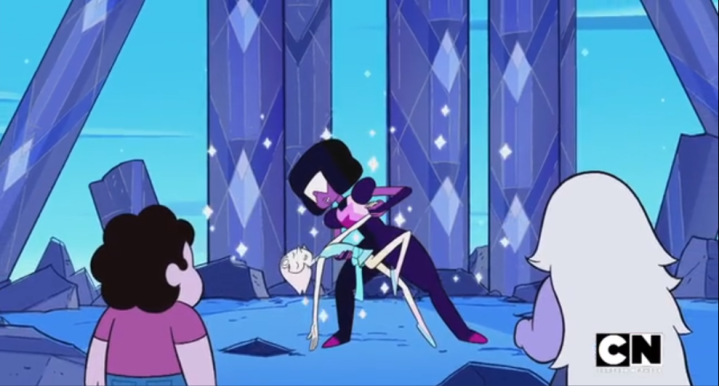 Sardonyx: What’s this? An encore performance? Just couldn’t get enough of me, could you? What are we waiting for? Let the show begin!

Then Amethyst, who still feels herself to be in disgrace, suddenly starts singing, because that’s just what you do when you have Feelings, I guess.

Maybe you’re better off with her
I think she’s better for you
I forgot how great it felt to be us
Guess I got…carried away.
I had to use you to make me feel strong
But I don’t care about that now
I see a tower built out of my mistakes
And it all comes crashing down

This show is generally pretty good about only putting in songs when they feel natural, but this one seems like it comes out of nowhere and doesn’t really add much to the scene (or not more than plain old dialogue could’ve done).  It sure doesn’t help that Amethyst has the weakest singing voice of the Crystal Gems (not bad, but Pearl and Garnet have fantastic voices), and the lyrical structure of the song feels an awful lot like the structure we’re used to seeing in Steven’s ditties.  Also, I’m really not sure who this is supposed to be addressed to. Garnet? Pearl? Steven? All three?  It articulates that she’s trying to make up for her “mistakes”, but again, I feel like a talk with Steven would’ve been more effective in this case.

At any rate, Steven tries to cheer her up (and also do something useful) by taking Amethyst to stake out the Hub that night, since they figure they can try to catch Peridot if she comes back to fix it again.

Steven: Garnet’ll be so impressed!

Now that I think about it, this actually doesn’t sound like a great idea if Amethyst’s goal is to convince Garnet that she’s not “reckless”…

Then Peridot’s escape pod shows up and starts repairing the tower.

Steven: What’s she doing up there? Enhance! Hey, for some reason, Peridot kinda looks like…Pearl?

It turns out Pearl was fixing the hub this time…and Amethyst clearly has a sinking suspicion as to why, one that she doesn’t want to share with Steven, let alone Garnet or Pearl.

Pearl: Oh, this is no good!

Pearl: It’s Peridot. She must have fixed the Communication Hub again! Garnet, it’s the Hub again!

Garnet: She’s evading my future vision! No matter how many times I try, I can’t see us finding Peridot…

Then they all travel back to the Hub again…

Pearl: Is something the matter, Amethyst?

Amethyst: You, you shouldn’t… 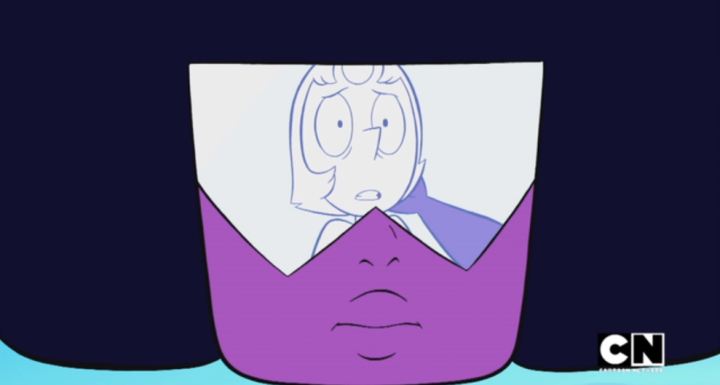 Pearl: I’m sorry, it’s just…so much fun being Sardonyx with you.

Garnet: That’s why I couldn’t see us finding Peridot.

Garnet: You’ve been fixing the Hub!

Garnet: You tricked me!

Pearl: No, no no no no! No, we just needed a reason to fuse…I just wanted to share a few more victories with you.

Amethyst: Wait, Garnet! You know, we’re so much weaker than you! Fusing with you is like our one chance to feel…stronger!

Garnet: Don’t defend her! Peridot is out there somewhere and Pearl’s been distracting us with nothing!

Although I can certainly understand Pearl (and Amethyst’s) perspective, I actually really get Garnet’s anger.  It is really hard to make me angry, but if you ever care to try, deliberately betraying my trust is one of the few guaranteed methods for riling me up.  Thanks to Pearl’s somewhat transactional view of fusion, she thought she had to create a “dangerous” situation in order to get Garnet to fuse with her, when Garnet might very well have said “yes” anyway if she had just asked casually.

Then she fuses with Amethyst without a word and it’s supremely uncomfortable all around. 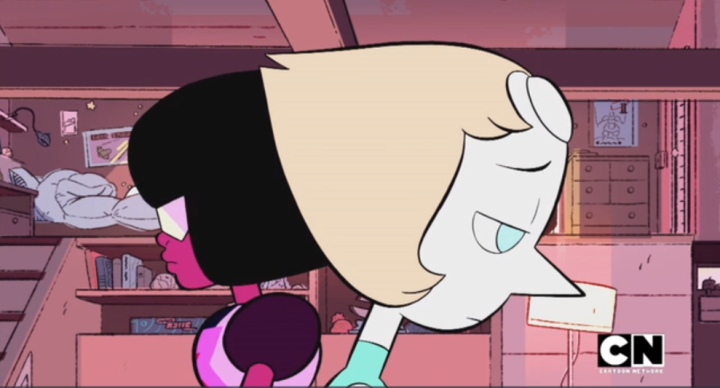 While the show still technically remains PG, these are some seriously dark emotions we’ve been wading into the past few episodes, and what’s worse, Steven himself hasn’t really been able to do much.  This is where the series really started reminding me of Princess Tutu – that show has a similar turn from (relatively) lighthearted episodic storytelling in the first season to a much darker, more plot-heavy second season.  The title character is even similarly sidelined, unable to do much to move the plot forward.  The problem is, in Steven Universe, no one seems capable of moving the plot forward at this point – except possibly the villains, who we’ve barely seen anything of thus far.  The Crystal Gems are just chasing whatever leads they can find, and the show can’t stop reminding us of the potential danger long enough for the cast to actually relax, which as I’ve mentioned before, is a big part of what drew me to the show in the first place.  Princess Tutu dedicated a lot of the second season toward fleshing out the “villains”, and while I appreciate that this show is trying to develop the Crystal Gems, there’s really no reason why Steven has to be relegated to an observer for the character development, no matter how dark the feelings are.