An episode about stories and the various ways we invest in them.

So we begin with an ending – the ending of Connie’s favorite book series, The Unfamiliar Familiar.

Connie: I thought it was a disaster! All the books leading up to this seemed to be taking on and subverting these “witch tropes”, really self-aware about being a pastiche, y’know? But in the end, none of that even mattered! Lisa and her talking falcon, rebels challenging the stifling traditions of the magical bureaucracy – I loved that! Then her falcon turns into a human and they get married? It completely dropped all the anti-authoritarian stuff and described a wedding cake for 50 pages!

Steven: Yeah! That cake was worthy of 20 pages, tops. There weren’t even strawberries on it!

Connie: I bet, since the books got so popular, the publishers put pressure on the author to water down the end for a larger audience appeal! Unlike art, the real world can’t always win against the iron chains of authority. That’s my theory, anyway. It’s just disappointing, considering I invested extra money in the hardcover copies. With maps.

Steven: I wish I could give you a new ending.

Thus, Steven and Connie embrace the joys of fanfic as the door to Rose’s room opens up again and he realizes they can just make a new ending for the series in there.

They decide that Steven should be the falcon Archemikeros (yeah, I’m just guessing at the spelling) and Connie will be Lisa.

Connie: Okay, my turn! Room, I want to be Lisa! Do I need to be more specific? You were pretty general about the falcon thing.

Steven: Oh, sorry. I guess the room only makes stuff when I want it. Maybe this won’t work after all…

Connie: Why don’t you just have it make a costume shop?

One interesting tidbit is that the Room doesn’t necessarily represent reality, but the way Steven thinks things are (as with a cloak which Connie says is the wrong color, and considering that she’s the resident expert on the book series, she’s probably right).

Steven: Come out, I wanna see you!

So they set out to rewrite the ending and I can’t help having some Princess Tutu flashbacks (all amateur efforts will do is invite unforeseen tragedy!). 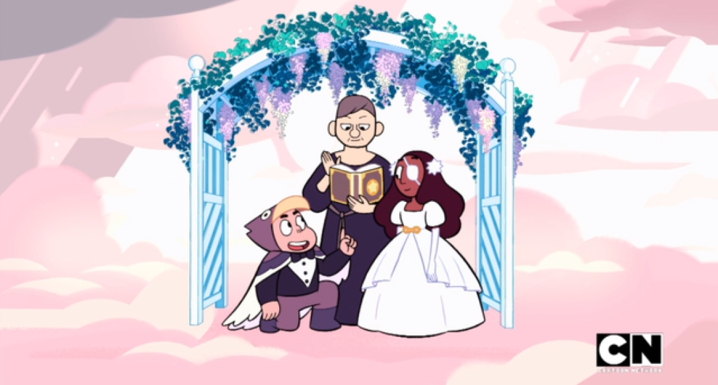 Steven: So, at the end of the series, Lisa and her falcon familiar Archemikeros are at the altar, with a cleric, about to get married. But we don’t want that ending. So instead…uh, I don’t know, what do you think?

Connie: Hm…what do you think?

Steven: Uh, well…how about a different proposal, Lisa? A business proposal! We can start a business together and sell…sell…turkey legs to make money to help out our fellow rebel comrades!

And now I’m thinking of the Cinderella play in Fruits Basket (because seriously, how do two completely different stories end up with a marriage proposal changed into a proposal to start a meat-selling business?). 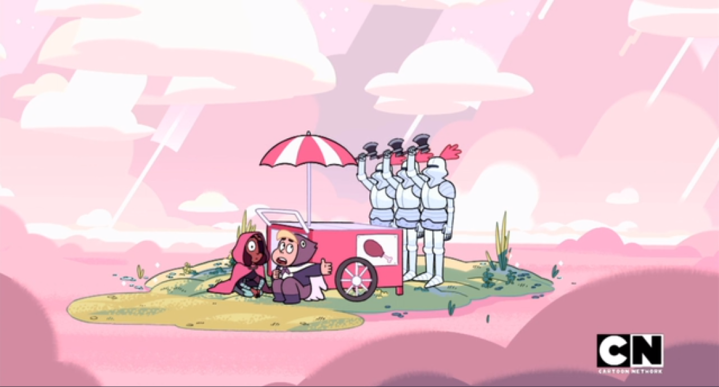 Connie is being suspiciously unhelpful with story ideas, so Steven just comes up with an excuse for them to get attacked by guards, thinking that’s what Connie meant by “anti-authority”.

Steven: Geez, these guys are corrupt! What should we do about them, huh?

Connie: What do you think we should do?

Steven: Come on, I’m really trying here! How do you want this story to end?

Connie: How do you want the story to end?

Steven: I don’t know…I just wanted to do this for you. This isn’t really like you, I- I don’t want you to just do what I want.

Then he finally realizes why “Connie” has been acting so weird: It’s not really Connie.  The room just made another version of Connie when he said he wanted to see her back at the costume shop, one that could only do what he wanted…and honestly, part of the reason he likes Connie is because she’s so different in her approach to things. 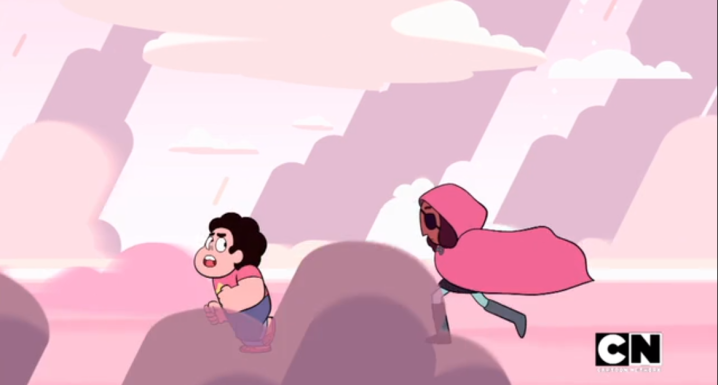 Steven: I’m done playing! Why didn’t you disappear like everything else?

RoomConnie: You told me not to do what you wanted.

Steven keeps on pleading with the fake Connie to leave him alone, and it never occurs to him that if he just told her he did want her to follow him, she would actually leave him alone.  Because that’s just Steven.

That’s quite a situation you’ve got there, Steven.

RoomConnie: That’s why you can’t tell her the truth! But you want to! You want to tell her!

Of course it takes all this for Steven to finally say how he really feels.

Steven: I like the ending of the book! […] I…I thought it was sweet that Lisa and Archemikeros got together at the end! They were always so thoughtful toward each other! And I was so happy when they found the spell to make him human, and I loved every page about the cake! I wanted to draw a picture of it! I’m sorry I pretended not to like it, I just- I just didn’t want you to think less of me.

Steven: Do you think I’m a bad person for liking the ending?

Connie: Of course not. I- Steven, it’s just a book.

Steven: But you really care about it!

Connie: I care about you more.

Connie: Oh, of course you like the wedding. You’re Steven. You love schmaltz.

It’s a cute sentiment that I can actually totally relate to.  It took a lot of time and effort for me to be able to separate “liking” people from “agreeing” with them, even on relatively trivial things like fiction.  And it’s even more amusing considering that this very show had a similarly polarizing ending (for the record, I’m on the side of “please just let my precious babies be happy” in this case).  Some people will always care more about what a story says and how it says it, while others care more about the characters and atmosphere, and there’s no hard line between the two (I’ve found myself on both sides in different franchises!).  They’re both valid ways to engage with stories, and just because you can’t explain why you like (or dislike) something doesn’t make the feeling any less real.  There have been plenty of cases where listening to a dissenting opinion has made me like a story less (or more), but I’ve found that the really good stories will always hold up, even when you see them from the least flattering angles, and so you’ll just learn to appreciate them more fully.  Like when Steven explains how the romance between Lisa and her familiar was actually seeded earlier in the story (even if the cake is 30 pages too long).