Steven begins to process everything that happened with a little help from his friends.

This is the first of a set of episodes where there’s some confusion over whether they belong to Season 1 or Season 2.  I’m going to side with the DVDs and include three additional episodes with Season 1 (partly because I like how it wraps up the plotline, but it’s mainly just simpler this way).

Anyhow, Steven is prevented from actually talking to Connie, so he instead imparts the gist of what happened to his dad first.  He doesn’t take it well.

Steven: They totally stomped us! This warrior Jasper was super beefy and knocked me unconscious, then they abducted me onto the ship because they wanted to take me away forever, and then we crashed the ship and I almost died!

Greg: Well what do they want with you?

Greg: Are more Homeworld Gems gonna come after you? 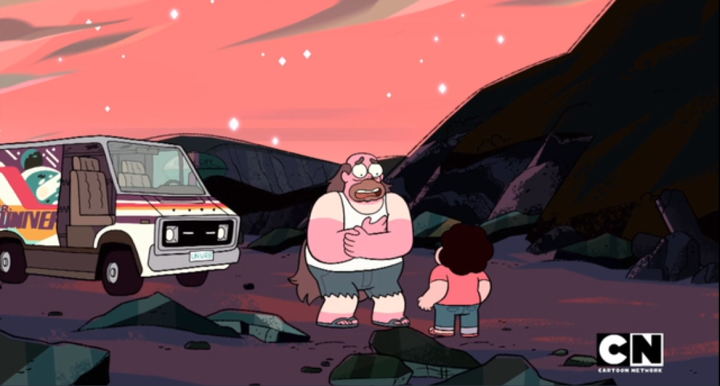 I feel you, Greg.

Now that he’s out of danger (for the moment), Steven’s finally being forced to grapple with what all this means, both for himself and the people he cares about.  And needless to say, he’s really concerned about how Connie will react after his dad narrowly avoids a heart attack.

Steven: Now, Connie, please don’t freak out, but a giant laser hand tried to steal me into space. But it didn’t, it didn’t! I’m back and everything is fine now…

He tries rehearsing what he’s going to say to Connie, but each successive attempt is worse than the last.

Steven: Um, Connie, funny story…as it turns out, there’s a lot more Gems out there than we thought! And I think they wanna…kill me? Hey Connie, that message I left you was just a dream! Ah, she’s too smart for that.

Then he runs into Ronaldo, which…well, I guess he can kind of relate?  But he’s still not a great source for relationship advice. 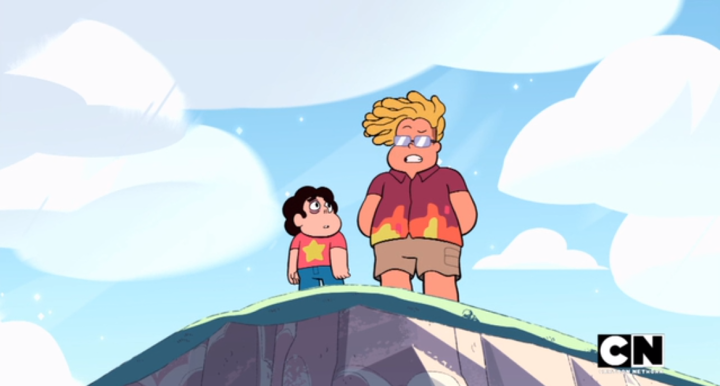 Ronaldo: That’s just what people like us do. Suffer quietly, shouldering the knowledge no one else can bear. As an aficionado of the weird yourself, you’ve probably noticed ordinary people fear the cold-blooded anger of the truth. The abyss is no Sunday swan-drive.

Steven: I know! My dad flipped out when I told him!

Ronaldo: Typical. But it’s a good reminder. This is no easy path we’ve chosen here. There are sacrifices! Look at them all down there, Steven. It’s our duty to let those simple people live out their simple lives, without ever knowing the burden of being friends with us.

This was just not what Steven needed to hear.

But at least he starts singing his feelings while Connie keeps trying to call him because she is a good friend and he almost literally left her hanging.

Everybody tells me life is precious, on the planet Earth
And that means you
And I have to protect you, what if somehow you got hurt?
What do I do? I don’t want that for you
What am I going to tell you?
You’re better off not knowing the trouble I’m in
I don’t want you to worry
About what I’ve just seen, about where I’ve just been
You don’t have to be a part of this
I don’t think I want you to be
You don’t need this, you don’t need me

Steven, she is a good friend, she loves you, and if you never bother to explain what happened it’ll be so much worse.  She hasn’t cared about any of the inherent dangers of hanging out with Steven up til now, I highly doubt this will change her mind.

Then Steven gets all morose and suggests that they keep the beach off limits to civilians, because he’s going all in on his martyr complex.

Pearl: You know, we did once have a fence…let’s get a new one! With barbed wire!

Amethyst: This time, let’s build a moat! I’ll be the crocodile!

Pearl: You always say you’ll be the crocodile, but you never commit!

Garnet: No fence, either. […] Steven needs to see his father and his friends.

Steven: No, I don’t. I can’t keep clinging to the vestiges of my humanity. It’s time I got serious.

We’ve already seen Serious Steven.  Regular Steven is better.  Also Connie keeps calling him.  And came all the way out to his house to check on him because SERIOUSLY THAT MESSAGE.

Then he just texts her that he doesn’t want to be friends anymore, so she calls him back and he finally picks up.

Steven: I can’t be with you anymore. I have a destiny.

Steven: I still wanna be friends!

Connie: Steven, your eye! What happened to you?

Steven: I didn’t want you to worry about it…

Connie: I’ve been worried sick all day! What do you think I’m doing here?

Steven: I just wanted to protect you.

Connie: Stop. Just tell me everything.

So they finally just talk everything over and it is wonderful. 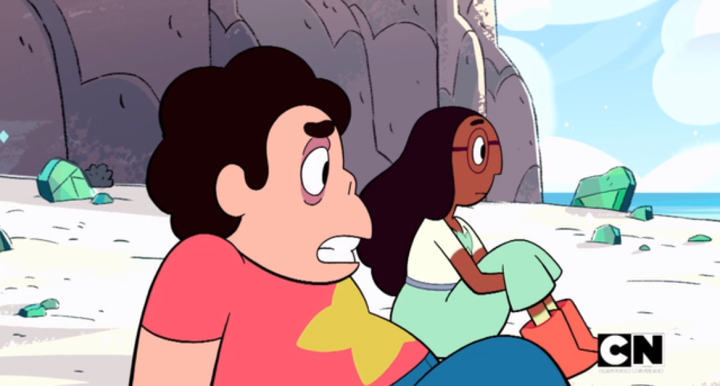 When you think about it, the whole finale was almost an anticlimax – sure, you got a fight between Jasper and Garnet, but the enemies were scattered rather than truly defeated.  Peridot escaped the ship in a pod, and Jasper is currently trapped in the ocean, but you know that Steven won’t let that stand when it also means Lapis is trapped.  It’s essentially just postponing the climax for another season (by which I mean they don’t get back around to it until the beginning of Season 3, because this show has some wonky pacing).

Connie: That is a lot to take in.

Steven: Are you okay?

Connie: Are you okay? You’re the one who’s been through everything. The least I could do was just listen.

Steven: I can’t ask you to do that.

Connie: I want to, Steven. I want to be a part of your universe.