In which the Cool Kids prove themselves to be actually legitimately cool people.

We’re finally wrapping up the wrap-up from the finale, and although Steven’s successfully reconnected with Connie, there’s still plenty of work to be done on various other fronts.  So now the Crystal Gems are working on clearing out the debris from the space-ship-wreck, and Steven’s doing his best to help out.

Steven: What? Who told you?

Buck: You looked a million miles away, man.

They invite him to hang out once he’s done working, but he’s pretty noncommittal, and the backbreaking work (understandably) drives it from his mind.

Buck: I only wanted to see you laughing in the pizza rain.

It’s cheesy (heh), but Prince is always a welcome addition.

Buck: Come on. It’s time to hang out.

Steven: You can’t hang out at night – night is for dreaming!

Sour Cream: Night’s whatever you want it to be. Time is an illusion.

Buck: Aren’t you done working for the day? 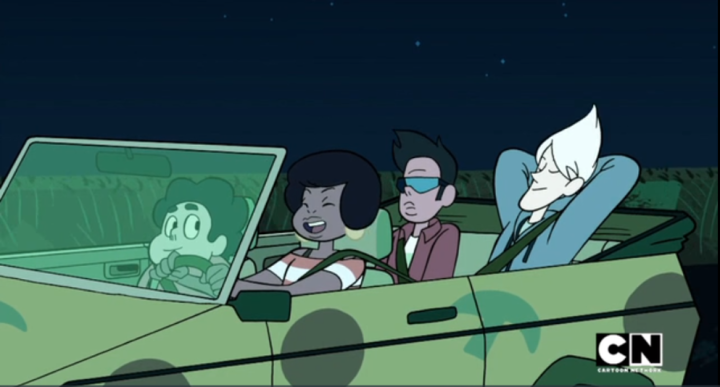 Then they start complaining about their families/home lives, as teenagers are wont to do.  It’s interesting how diverse Beach City is as far as family makeup (although a fair number just have inexplicably absent parents – we do eventually meet Sour Cream’s mom, but Buck and Jenny’s moms are never even mentioned): Sour Cream comes from a blended family, Jenny has a multigenerational family, Buck just has his dad, and Steven has his weird Steven-family.  Seriously, the Maheswarens are the only couple we’ve met so far that constitutes a nuclear family.

Sour Cream: I’m just like, I don’t wanna be a fisherman! Everyone knows you can’t rave in a raincoat, Stepdad!

Buck: At least he only bugs you about one thing. My dad’s gotta say something about every thing I do, cause I’m the mayor’s son! And I’m like, you can’t tell me what to do, I’m the mayor’s…wait.

Jenny: Puh-lease! You’re just walking in cake with that talk. You don’t even know what bad is until you have a sister. But I don’t know why I have to spell it out that I’m the evil twin and she’s the good one! Don’t ask me to help you with your homework – I’m at some metal concert.

Steven: Family stuff is tricky. A few weeks back, my dad and the Gems grounded me from TV. […] And then I found out that the Gems were alien rebels and that there are other Gems out in space that want us dead cause they think we’re traitors. And they tried to take me hostage cause they think I’m my mom. And…maybe I kinda am? I wish I could talk to Garnet, Amethyst and Pearl about it, but I think they kinda blame me for my mom not being around.

This is the appropriate response.

Buck: But you always seem so upbeat. You’re a real champ, Steven Universe.

Then they stumble on Peridot’s escape pod.

And of course Steven’s the one trying to be responsible, but peer pressure.

Steven: You need to get away from there!

Jenny: Woah! You need to relax. It’s not doing anything.

Steven: It’s not just the pod. This means Peridot is just out there somewhere, trying to hurt the Earth!

Jenny: Steven, come take a selfie with me and this thing!

So they all get in on the selfie action and it’s actually kind of sweet.  Then they convince him to get in the pod for one of them, and naturally he gets it running.

Steven: I really shouldn’t be playing with this. I have to take this back to the Temple immediately!

Jenny: No way. You just got it working!

Buck: Aren’t you your own mom? You can do whatever you want!

Sour Cream: Yeah, you gotta do some donuts in that thing. […]

Jenny: Steven, you’ve been under a lot of pressure. Don’t you think you deserve to have a little fun?

And this is one of the reasons I love this show: It never forgets that Steven’s a kid, no matter how much responsibility is heaped on his shoulders.  He should be able to make mistakes and get messy, but with such high stakes failure sometimes has severe consequences for him.

And then he makes a mistake.

He seems to have accidentally activated the pod’s combat mode, which also conveniently shuts it and prevents him from communicating with the people outside, verbally or visually.  Also he sets off a flare.

Pearl: I knew it! That flare led us right to the escape pod!

Then they starts attacking the pod, because, y’know, they think it’s Peridot terrorizing humans and don’t stop to listen before acting.

Garnet: You’ve got a lot of nerve taking refuge here of all places! But I don’t know where you get off attacking defenseless humans in your deadbeat escape pod. And if you think you’re safe here, well I’ve got news for you: You lost! Stay off my planet!

Jenny: Stop! Steven’s in there.

Yeah, stepping in front of an angry Garnet is real metal.  Because she is in fact a very good friend who cares about Steven’s wellbeing because how could you not love him and want to protect him? 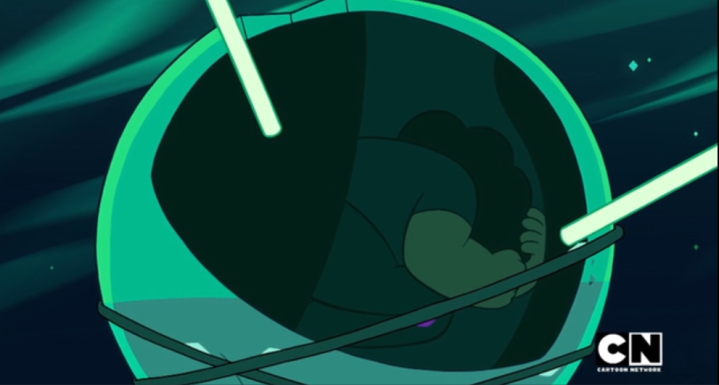 Of course the Gems are upset that they nearly killed/seriously injured their Steven, and of course Steven blames himself for it, but the Cool Kids won’t stand for that.

Garnet: Steven, this is unacceptable. I’m very disappointed in you.

Jenny: Hey, cut him some slack!

Buck: It’s not his fault!

Sour Cream: Just let him be a DJ!

Sour Cream: We just wanted him to have some fun. I don’t know what’s going on with aliens trying to abduct him and him being his own mom, but it sounds like he’s got a lot on his mind.

Jenny: I’m sure whatever you’re having him do is important, but everyone needs a break once in a while.

So the Gems lay off, and finally unground him from TV (since he did kind of save them all from space jail). 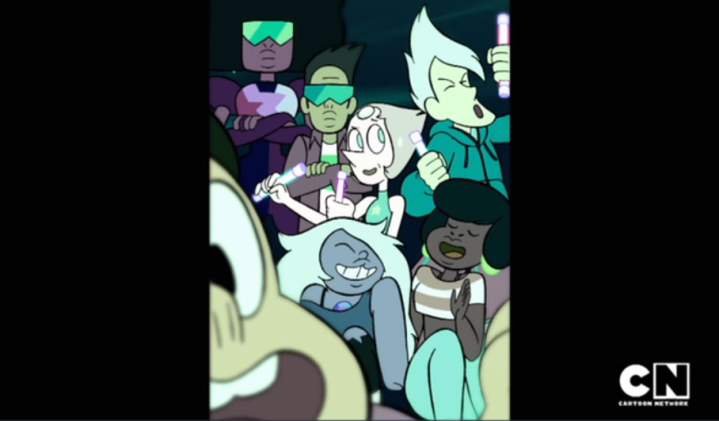 And this seems like a good place to end Season 1.  While the quality is occasionally uneven, I love how you really feel like you get to know the town (and in turn, what Steven and the Gems are fighting for) before upping the stakes, not to mention the incredible character writing throughout.  At times it’s episodic, but those times never feel wasted – it’s more indicative of a flexible structure than anything else.  This is easily one of my favorite seasons (if not, at times, the favorite) because it’s just so good at what it does.  Future seasons are often more plot-driven, with mixed results, but we’ll get into that later.

One thought on “Joy Ride”