Now that we know The Twist, we can finally begin to see how the world looks from Akito’s perspective.

Kureno: It’s the truth. The Sohma family has many secrets, but out of all of them, that one’s the biggest. […] Ever since the day she was born, Akito has been raised as a man.

This helps explain an awful lot about Akito – like why “he” is so very jealous of the male Zodiac members, or her hatred for cross-dressing.  But the biggest credit in the shaping of Akito is due to Ren-san – her mother. 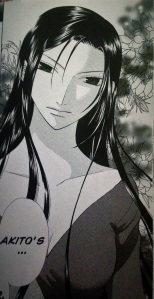 Ren: I was just greeting Hatori. Is that so wrong?

Akito: Whenever you see the men of the Zodiac, you try to draw them under your spell…!

If this looks like a mother competing with her daughter for sexual conquests, it’s because that’s exactly what it is (more or less).

Kureno: [Ren] has a sort of illness, in both body and mind, and usually stays in the back rooms, but she’s still a major part of Akito’s life. […] And it was her mother’s doing. She was the one who decided to raise her daughter, Akito, as a man. As for why she would do such a thing, neither Akito nor Ren-san will speak of it. The only thing I know for sure is that those two hate each other.

I was a little confused (and frustrated) when I first read this chapter, because Akito’s relationship with her mother isn’t that interesting when you’ve only just found out that he’s a she.  But it actually is a relevant detail when it comes to piecing together Akito’s story, so keep this stuff in mind (if you can).

Ren: Come, now…always using such filthy language, you’ll make the Members of the Zodiac fall out of love with you, Akito-san! Oh, Hatori, I feel sorry for you…

Akito: You don’t have to feel sorry for him! And they won’t fall out of love with me…! We have a “bond” that connects us! We live in a world you can never be a part of!

Ren: You’re still spouting that nonsense? You stupid child. How many times do I have to tell you? The love you feel because of that bond isn’t real. That “unchanging eternity” you’ve been holding on to for dear life is a sham. A delusion! I pity the members of the Zodiac, being forced to humor you.

Akito is repeating a lot of the same things she said to Tohru, except that we now know that it’s not quite true.  Kureno’s bond is already broken, with the obvious implication that the whole curse could fall apart (and will, if Tohru has her way).

Akito: Then how about you tell me what’s real! A parent’s love!? Even that isn’t perfect! Even in just the Sohma family alone, countless parents have abandoned their children! Including you! You see!? Nobody, not even you, can define what’s real, what’s a lie, what’s pretense, and what’s worship! The bond between me and the Members of the Zodiac will never change! You can’t deny that! No one can deny that it’s eternal!

Ren: Go ahead! Do it! If I die, my soul will ascend to heaven where I’ll be with Akira-san! Because heaven knows I don’t need you!

Well now we know where the crazy comes from…

…Akito. You were a child born to be loved by all of them. Everyone was waiting for you.

Kureno: Ren-san doesn’t believe in the bond that connects Akito and the Zodiac members. She thinks a bond like that is unnatural, and false. That’s why she never stops fighting with Akito, who clings to that bond. The day Ren-san conceived Akito, I woke up crying. As did Shigure-niisan, Hatori-niisan, and Ayame-niisan. Of the Members of the Zodiac, only the four of us know that Akito is a woman. Ritsu was apparently too young at the time to remember. We four had the same dream. In the dream, the God we hadn’t seen yet, Akito, appeared and said, “We shall meet soon.” That’s why we went to Ren-san, who didn’t even know she was pregnant yet. We had tears in our eyes. We said, “We’ve been waiting. We’ve been waiting for you.” It felt like feelings I didn’t even know I had were welling up from deep within my heart, and a part of me I didn’t know existed was crying out. That was the voice of the Spirit. Another self living inside of me, the blood of the spirit in my veins…even if new incarnations were born, the blood of those spirits made their demand clear – “Don’t betray Akito.” Looking back, when the curse broke for me, I could finally see how unnatural it all was, just as Ren-san had said. But I saw something else too. A sobbing little girl…

The saddest part is that Ren doesn’t care about her own child’s tears (unless she actually takes pleasure in making Akito cry, which I wouldn’t put past her).  Also, recall the dream Shigure alluded to back in Chapter 16…

Akito: Why does she always say such cruel things to me…? She’s always so mean…

She sure does have a legitimate complaint in this case.

Kureno: How could I ever abandon that crying girl? When there’s another girl I can’t be apart from, there’s no way I can go see Arisa…I’m sorry. Maybe I told you too much…I know it’s a lot to process. Look. I’m not saying Akito doesn’t also fly off the handle and hurt people sometimes, but I want you to know that she’s damaged. She’s hurting too. I just want you to understand my reason for staying with Akito.

Maybe Kureno’s still a little too quick to dismiss Akito’s faults, but this is kind of what makes Fruits Basket such a good story: It shows empathy for all of its characters, even the “bad” ones.  Takaya-sensei never excuses Akito’s actions, only explains. No matter how hurt she is, it doesn’t give her a right to abuse anyone else, but seeing her pain is the first step toward understanding her and (hopefully) eventually teaching her to function as an adult.

Kureno: I’m sorry. It seems all I ever do is hurt people. And yet, this is the path I chose. I chose it, myself. It’s the path I’ve decided on, so I’m sorry. And thank you for everything.

Well, Rin looks really mad that Tohru’s crying and it’s weirdly adorable.  Although I’m sure Tohru would prefer a hug.

This chapter is primarily an infodump, but it’s honestly easy to forget that because the information is so closely tied to the emotions.  And poor Tohru is just overwhelmed by it all.

Sorrow connects us like a spiral and keeps us from moving.