Kureno: I’m not like the others anymore. I no longer transform. My curse has already been broken. It happened years ago. I was a little younger than you are now. So I’m no longer a member of the Zodiac. I can’t fly anymore.

Kureno’s story is important because it highlights how this is about more than just a curse – it’s also about the toxic dynamics that turned a bond into a curse in the first place.  But first, Tohru asks the obvious question: How did he break his curse?

Kureno: I don’t know that myself. It happened suddenly. There was no warning. It just broke. It felt like my field of vision suddenly opened up. There was nothing inside of me but “me.” There was no longer a separate presence driving me on. The sky was so blue. When I realized I would no longer be able to fly in that sky, I was both anguished and relieved. (internally) I finally felt like I had become a “human being.”

Tohru: But the other Members of the Zodiac still think you’re the Rooster, Kureno-san. And even now, you stay by Akito-san’s side. Kureno-san, are you still bound by something?

Kureno: Sorry. […] I won’t see Arisa again. Because I’ve already decided to stay with Akito. It was just twice, only two times that we met and talked to each other. They were…insignificant meetings. If it ends here, if I don’t see her again…they will become trivial memories before fading away altogether someday. That’s all it was. So you don’t need to keep worrying about –

I want to see her so much, but – and I know it was only twice – but she was still my first…my first time since becoming a “human being” that I, myself, thought I could fall in love with someone of my own free will. The truth is, we could embrace as much as we liked. I’m no longer possessed. I alone was freed so easily from the curse that everyone else is still suffering under. I alone am free. I could go anywhere I please. I could love whomever I wish. But that’s exactly why I have to…I have to stay with Akito. 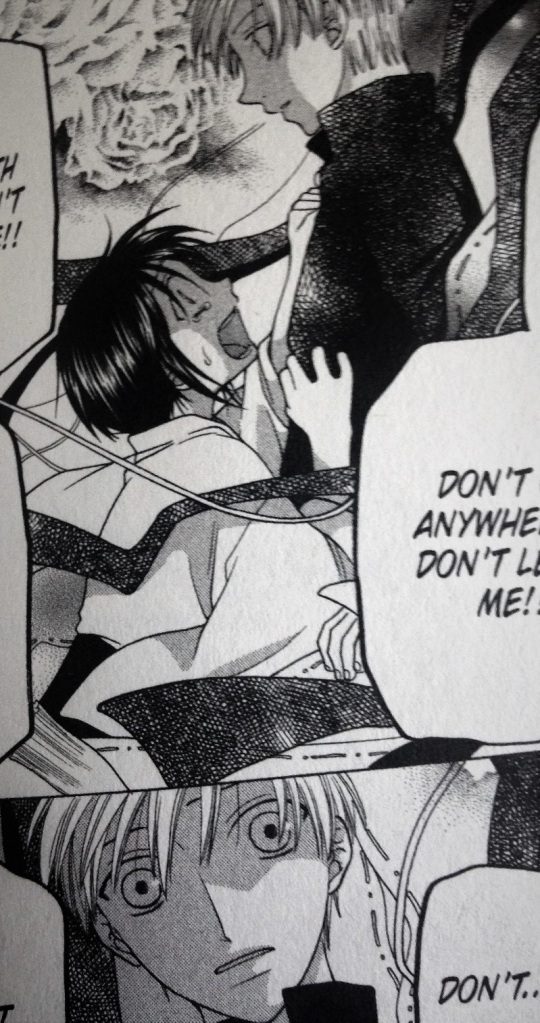 Akito: Why are you looking at me with those distant eyes!? I hate it! […] Don’t leave me behind! Don’t…don’t…don’t…! Don’t abandon me! Kureno! Please…please! I’m begging you, so please don’t go!

Akito was terrified by the prospect of losing Kureno.

Kureno: I couldn’t forsake him. I couldn’t…to Akito, the bond with the members of the Zodiac is “everything.” God can’t exist without the Zodiac. So I made a vow on the day the curse was lifted from me. I swore that I would stay by his side. If that was what it took to dry Akito’s tears, if tricking the other members by pretending to still be possessed would stop that child’s tears, then that’s what I would do. There was nothing else to think about.

So Kureno is still bound by that promise he made to Akito as a high schooler at an extremely emotional moment (to put it mildly).  He defends it as his own choice after a lifetime of being controlled by the Curse, but he fails to realize that “human beings” are fallible, too.  Free will is a gift, but also a responsibility to yourself and others.

Shigure: So you just felt sorry for him, did you? After all, the curse, the bond, whatever, was broken, right? Shouldn’t you have left at that point? For Akito’s sake if nothing else.

Shigure’s really good at seeing what people should do, but he also knows perfectly well that people rarely do what they ought to (that might be his own main flaw).

I don’t blame Kureno for his terrible life choice.  When I first read the manga, it actually made so much sense to me that I couldn’t see how it was terrible – so I would probably have made the same terrible decision in his shoes.  He missed his only chance to escape, and now he and Akito are dangerously codependent.

Kureno: Certainly, my curse has broken, and the bond I once felt has vanished with it. (internally) And maybe it really is only pity…maybe I embrace Akito only out of pity…(aloud) But I just can’t leave him. I took an oath…I swore I would always be there. Until the day that Akito no longer needs me. I swore to myself that I would live for this girl’s sake. This child, who cried as she clung to me, trying to keep herself from shaking apart…weaker than anyone. More fragile than anyone. And so very afraid…I would live for this girl’s sake. 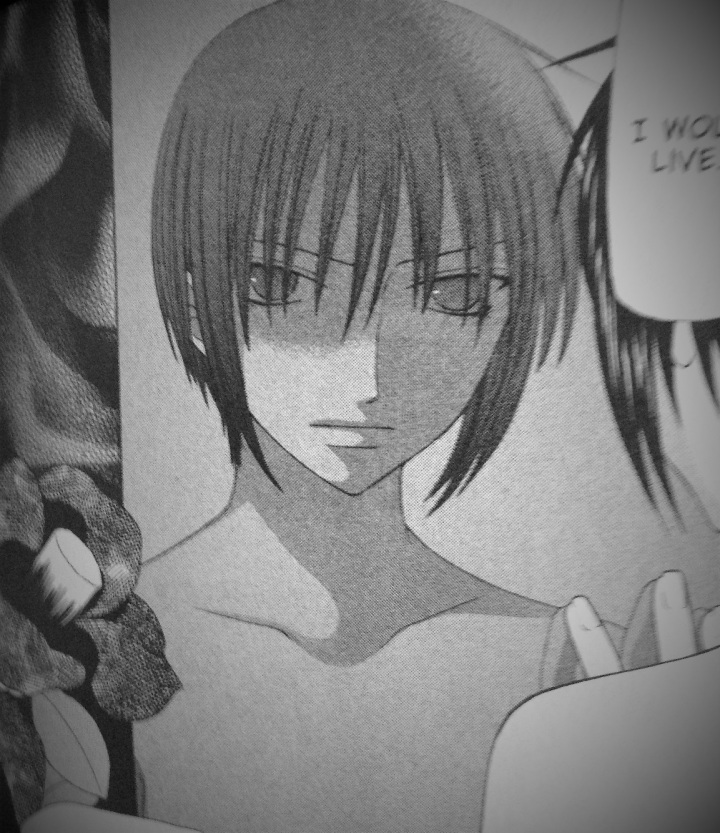 I would live for this sad girl.

Why, yes, Kureno did just call Akito a girl. Because she is.

Take some time to soak that in – I know I needed to. I distinctly recall tearing through the rest of Volume 17, then leaving my room in a daze to say to my brother and sister (who had already finished the series), “So…Akito’s a girl.” Just to confirm that I’d understood it correctly.