Yuki takes the stage again as he prepares for parent-teacher conferences and tries to figure out Rin. 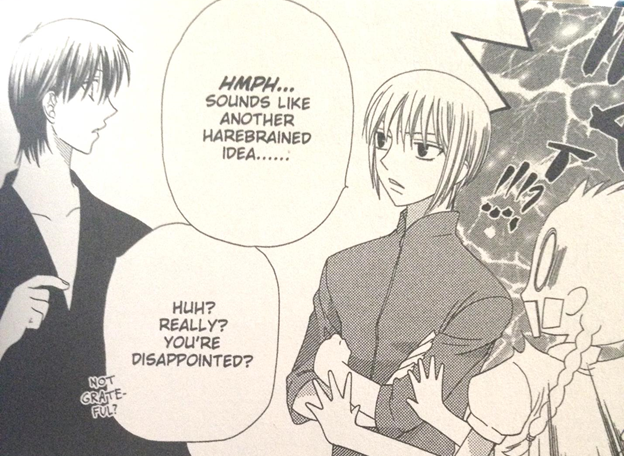 In other news, Tohru’s grandfather is laid up with a thrown back, which in addition to causing her considerable concern on his behalf, leaves her without a “parent” for her conference.  So Shigure offers to act as her guardian.

Tohru: What!? Um, but I couldn’t trouble you with something like that, Shigure-san!

Shigure: It’s no trouble at all. I’m looking forward to it…(internally) Especially the look of unbridled disgust on Mayu-chan’s face when I suddenly show up…

Yuki: There are a lot of things on my plate. There are things I need to address, things I need to make clear from here on out. I don’t think that’ll be entirely unpleasant. I just need to figure out where my priorities should lie.

Haru: Momiji is an air purifier.

Yet another keen observation from Haru in the form of a non-sequitur! But Yuki’s been thinking a lot about Rin since he ran into her at the vacation home, so he probes Haru a bit.

Yuki: It’s just that Rin seems so stubborn. I thought maybe that’s why you were having a hard time talking to her.

Haru: Oh, yeah. But the more time passes, the more I think those might have been her real feelings. Rin has a sharp tongue. She doesn’t hesitate to say things that’ll hurt. But still, she doesn’t say things just to protect herself either.

(remembering) Rin: I don’t need you anymore. I’m just sick of you.

Perhaps she doesn’t do things just to protect herself, either – so why would she want to break the curse?

Yuki finally psychs himself up to talk to his mom at the Sohma property…only to find that she’s not home.  On his way back, he runs into Kagura playing hooky.

Yuki: Your eyes are puffy. Something happened yesterday between you and Kyo, didn’t it? That guy has been depressed too. Distant, I guess.

Kagura: Toward Tohru-kun too? Wait, sorry, scratch that. I’m just battling against a seriously broken heart. It’s been a rude awakening…or maybe a big responsibility? But I’m fine. Really. Having feelings for someone isn’t based on logic. Even if you have things figured out in your head, once you realize you “love” someone, it’s all over. (internally) That love is all you can think about.

I enjoy Kagura’s character now way more than I did in earlier volumes. It’s not just that her personality is toned down; I think it’s that I could sense the artificiality of that “girlfriend” persona all along.  This is the real Kagura.

Yuki: I’m totally jealous, because she knows exactly what her heart wants. Unlike me, she has no hesitations, so even when she’s heartbroken, she still single-mindedly…

He’s feeling a lot of pressure to decide what he wants from life (even if it’s something he doesn’t think he can attain), and again he feels like he’s being “outpaced” by people like Kyo who are either more in touch with their feelings or less sensitive to the approval of others (or both). 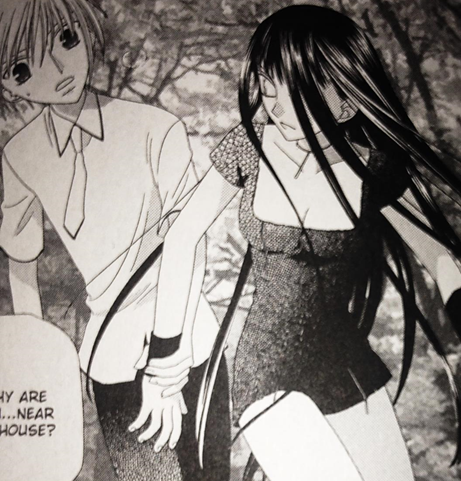 Yuki: Rin, did you really break up with Haru? He told me you two had been going out. Rin, I remembered something. Back when I was still locked in that room, you and Haru would sometimes visit me. And every time, you would say, “Let’s go. Enough of this.” But when I think back now, I realize that after you’d say that and leave, someone would always come to check on me. After all this time, it finally hit me. Akito would never have allowed me to have visitors back then. But Haru still came to see me. And you were protecting him, weren’t you? You sat there on watch the whole time so you would know right away if someone was approaching. To make sure no one would yell at Haru. […] Even now, you’re trying to protect Haru from something, aren’t you?

Rin denies every accusation of decency, claiming that she really really doesn’t care about Haru. 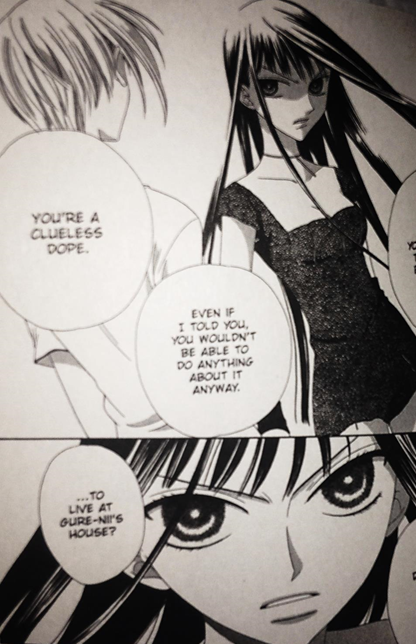 Rin: Do you even know why you were allowed to live at Gure-nii’s house? Haru begged him. “Please get Yuki out of here! Please save him!” At the time, Gure-nii just joked and said, “Sure, as long as you call me ‘Sensei’ from now on.” And Haru, idiot that he is, took it all to heart and still calls him that.

Sure, Rin. You’re totally saying this to bash on Haru and not to let his best friend know exactly how much he owes him. 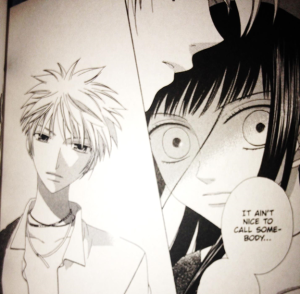 Haru: Hey, now. It ain’t nice to call somebody a s—head, Rin.

I love you, Haru. I know I say this about pretty much every character in this series (except Shigure), but they’re just so darn lovable! Even when they’re cussing!