Yuki is put in a rather awkward position when Haru and Rin engage for the first time since their breakup. 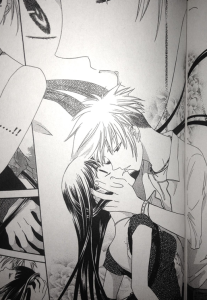 Haru: Of course I ain’t gonna die. Rin, did I totally misunderstand? I thought I understood everything about you. Your voice is more precious than anyone’s, but did I not hear what you were saying? Rin, are you still like you were on that day, unable to stand on your own?

Rin slaps him (which he totally had coming anyway) and runs off without another word.  Seriously, though, Haru is such a sweetheart, even if he does force a kiss on his ex-girlfriend right in front of Yuki.

Yuki: Haru, you’re not going to go after her…?

Yuki: You’re pretty laid-back about this.

Haru: No, that’s not true. This was a real wake-up call.

It’s pretty obvious to Haru that Rin still cares about him, but then why did she break up with him in the first place? And now he’s blaming himself because he thinks he should’ve been able to sense her needs or whatever and Haru baby, just…okay, I guess there’s really no easy answer for this situation.  The main issue with them is a lack of communication, and the fact that they initially chose not to tell anyone about their relationship is kind of a symptom of that.

Anyhow, Haru says he’ll manage Rin and recommends that Yuki focus on his own commitments (like Student Council).

Yuki: Really? Is that what you think? That’s what’s best for me? Making myself top priority?

YES Yuki. You really do need to make yourself top priority right now.  You need to remind yourself that YOU are valuable because so many other people in your life have told you you’re worthless.  You’ll have plenty to give back after you’ve attended to your own needs. 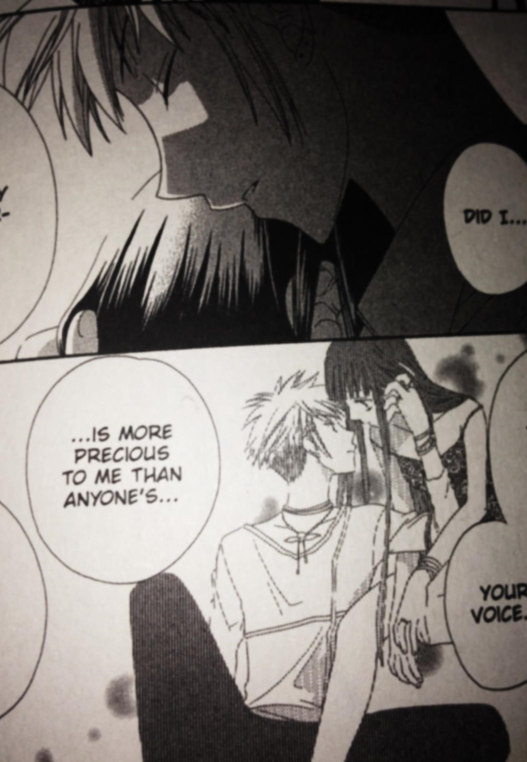 I can’t stand on my own. I can’t move forward, move ahead…not by myself…

So Tohru goes to visit her grandpa, and he starts talking about Tohru’s parents (Katsuya and Kyoko)…notably, he doesn’t call Tohru “Kyoko” this time like he had been doing.

This triggers some memories of her mother from when she was little, and really upsets Tohru to a degree we’ve rarely seen.

Tohru: (internally) Don’t say that. Get better. I’ll do anything to help. Anything you ask…so don’t go. Come back. Don’t take Mom with you.

Tohru: I was surprised. For a second there, Kyo-kun, I thought maybe you’d been sent from the heavens.

It turns out that Kyo actually took Yuki’s advice and is here to walk Tohru home.  And speaking of home, there’s that scumbag of a writer that we apparently haven’t heard from recently enough.

Haru figured out Rin had been up to something at their house, so he tries Shigure but can only get him to admit she was there (and that he’s aware of their relationship status).

Shigure: I envy you kids your youth. You flounder through life, struggling desperately so you won’t drown, even though you would float if you’d just relax.

Haru: Yeah, but you only get to that point by first struggling your ass off until you can’t anymore, right?

You could do to struggle a bit yourself, Shigure.  I kind of get the feeling he just tried relaxing one day instead of struggling himself ragged. Either that or he never really stopped struggling, contrary to all appearances…

Don’t take the easy road. Hang in there, and keep struggling. That’s the job of youth, right?