This chapter is primarily comic relief, and after so much drama in the past dozen or so chapters, I am more than ready to accept that. 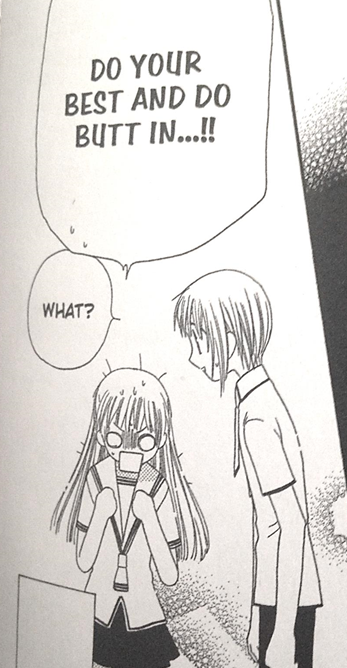 First, Yuki’s forced to apologize for his Mom because she wanted to postpone their conference (and evidently she didn’t even bother telling him about it).

Tohru: The parent-teacher conference is for you, for you to think about your path, about your future. So…so Yuki-kun, please do your best.

In other news, it appears that Shigure got exactly the response from Mayuko he was aiming for. Good for him.  Seriously, the tension between them is so palpable even Tohru can sense it.  But this is supposed to be Tohru’s conference, so Mayu manages to steer the conversation to the topic at hand.

Tohru: I’m going to get a job. But I want to successfully graduate from high school and start working full-time. After all…(internally) That was the last promise I made to Mom.

Mayuko: Are you going to leave Sohma-san’s house after you graduate?

It’s pretty clear that Tohru has only managed to avoid getting stressed out about her future by not thinking about it at all.  All she can see right now are the huge obstacles before her (mainly graduating high school and breaking the Sohma curse – you know, little things!), so she can’t even imagine what’s waiting for her on the other side.  It can be really easy to forget that there is plenty of life beyond school.

Anyhow, Mayu stops to chat with Shigure about Tohru.

Mayuko: About Honda…treat her with a little more care. She’s a sweet girl, and because of that, she’s the type to carry others’ burdens.

This reminds Shigure that Rin had expressed similar concerns about Tohru when she noticed the bandages on her face.

Rin: Gure-nii, what are Outsiders to you? What is she to you? A thing? Like a dropped book? Like a scrap of paper?

Funny how concerned Rin seems about Tohru, isn’t it?  But really, when everyone else is so busy either leaning on her or otherwise placing their hopes on her, it takes a little distance to see just how much that must all weigh on Tohru.

Shigure: Believe it or not, I think I’m taking very good care of her, which is unusual for me. […] Considering my personality, I think you should be happy as is. Don’t pin your hopes on me. In the first place, that’s not my duty.

Mayuko: Well, you say that, but I know you’re not nice, even to the people you like.

Why does Shigure have to be the adult in the house? Why can’t they all just move in with Kazuma? Why!?

Saki and Arisa sense that Tohru’s troubled and confront her about it, like good friends.  But Tohru claims it’s just worries about her future.

Wrong. That’s a lie. It goes much deeper.

But talking of the future reminds her of the conversation she had with Shigure about laundry and soumen, which at least leads them into more cheerful subjects.

Arisa: Tohru, you shouldn’t put much trust in that scribbler. […] He has that schemer vibe to him.

Saki: He is twisted…

Then Kazuma comes in with Kyo, and this happens.

Saki: He doesn’t look very much like Kyo, but he is handsome, isn’t he?…Oh? What’s wrong?

For the record, this is the biggest age gap.

Kyo’s conference is very short, mainly because Kyo doesn’t have much to say about his future.

Kyo: You ain’t gonna say anything?

Kazuma: Adults don’t have the right to deprive their children of free will. Although I do believe we have the right to worry. Think about it. You can take all the time you need. I want to hear the answer you decide on.

There isn’t much time left. Not much time left to spend with her. I wanna be with her. Thoughts about the future? That’s all I can think of. Nobody knows yet what the answer is gonna be. Not until the day I graduate.