I haven’t talked much about Kagura, even though she was the first member of the Zodiac to be introduced after the main three.  There are two reasons for this. One, in all the time she’s been around, she’s had maybe one scenario of character development (maybe).  Two, I honestly didn’t get her.  I still don’t relate to her, but I think I’m finally starting to understand her – now, when she’s all but bowing out of the story.

Kagura: You’re still not big on TV? If you watch now, no one will get angry, you know?

As always, Kagura gives us a lot of insight into Kyo’s character – in this case, we find out a little about Kyo’s childhood, back before his mom died (it’s not clear whether or not that event was what turned him into a “grump”). 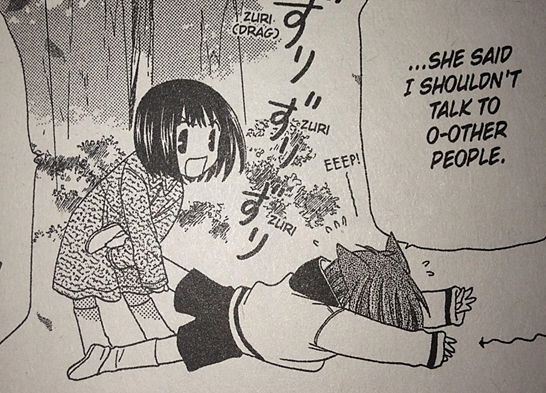 Kagura: Do you always play by yourself? Don’t you have any friends? What else do you like, Kyo-chan? What’s your favorite TV show?

Kyo: Don’t watch. Mom gets mad if I do. She says it’s full of bad stuff.

Kagura: Hey, wanna play with me?

Kagura: Sure…yeah, really! Starting today, I’ll be with you! I’ll always be by your side!

She takes Kyo to an old yard where they used to play.

Kagura: Here is where I first saw your true form, Kyo-kun.

Kagura being Kagura, she’d wanted to try on Kyo’s bracelet and wouldn’t take no for an answer.  Then she ran away screaming when he turned into a monster.

Kagura: After that, your mother let you out of the house less and less, right, Kyo-kun? And you started to avoid me. You built a distance between us. But it wasn’t really you. (internally) I’m the one who built that distance. (aloud) Kyo-kun, I felt miserable about being born possessed by a spirit. Of course I did. When I was little, my parents would often fight over me. And afterward, every time I saw Mama crying alone, it tore me up inside. I hated myself so much. I felt so insecure. But then I was really happy the day I met you. You made me feel…okay about myself. Because I knew that as bad as I had it, my sorrows were nothing compared to the Cat.

This is the sort of thing that I can recognize as a human emotion, but just can’t relate to.  I simply can’t comprehend feeling better about oneself because someone else is worse off, but I can kind of see that sort of feeling in other people.

Kagura: That’s right, I felt normal around you. That’s why I was with you all that time. I was looking down on you, Kyo-kun. 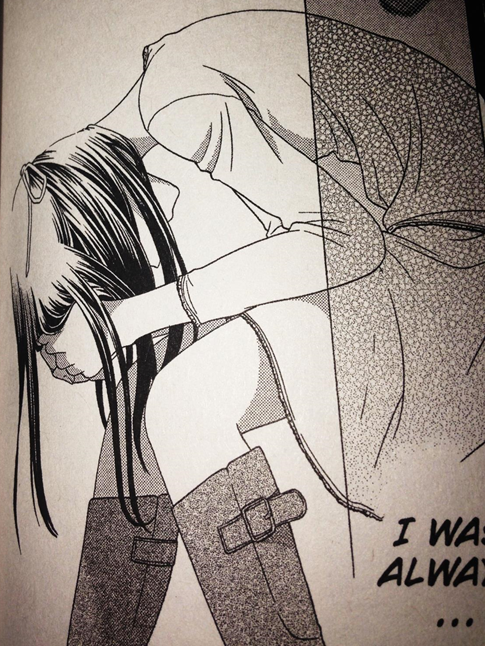 For a while, I thought the reason I didn’t get Kagura was because she was motivated almost entirely by romance and I just didn’t get romance or something.  But there are characters I love and even deeply relate to that focus primarily on romance (Rue from Princess Tutu, for starters), so I’m forced to conclude that Kagura just has a personality which I have trouble comprehending, perhaps because it’s contrary to my own in many ways.

Kagura: (internally) I’m a terrible person, aren’t I? I’m the absolute worst. On that day, when I ran away from you, I was terrified – but also disgusted with myself. I found myself utterly revolting. I hated what happened. I wanted to fix it. I wanted you to forget it ever happened. I dreamed of becoming a “pure” version of myself who could accept “Kyo-kun the Monster.” Not realizing that line of thinking was just as vile…(aloud) I thought if I could fall in love with you, if I could get close to you again, if you would fall in love with me, then the “me” who ran away, the “scumbag me”, would probably disappear like she’d never been there.

It wasn’t until the day his true form was revealed to Tohru that Kagura finally realized what she was missing – she’d never thought about Kyo’s feelings, whether in their “relationship” or after she’d run away screaming as a child.

Kyo: You don’t have to go to all this trouble, saying stuff that’ll just hurt you. Kagura, I’m not and I never was in love with you. I’ll never fall in love with you. That’s all I wanted to say. You looking down on me and all that…I don’t care. There’s nothing to apologize for. […] Kagura, whatever your reasons were for playing with me, I was happy. Thank you.

Kagura: (internally) It was a love born from my selfishness. But the way Kyo-kun would call my name…his awkwardness…somewhere along the line…it became real. I honestly was chasing after him for real. 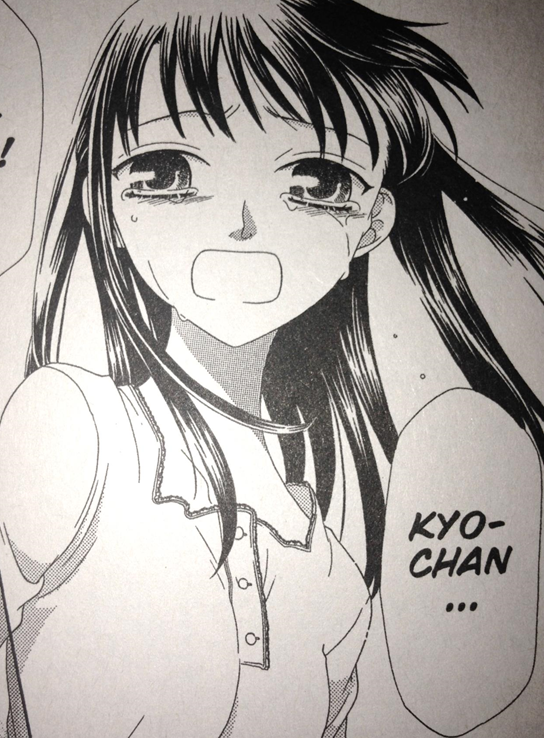 Kagura: Kyo-chan! I love you…I do love you…

As selfish as her original motives may have been, if you try to love someone hard enough and long enough, it’s impossible for that desire not to become true.

Kyo’s grown up a lot.  And I guess Kagura’s grown on me a bit.  When I first read this chapter, I was mostly just glad that she was getting out of the way.  Now, I wish her the best in getting past her lost love that never was.

These emotions are mine alone. The Kyo-kun from back then is also mine alone. Unlike me, he didn’t apologize. He thanked me. Kyo-kun stayed with me until I stopped crying. Kyo-kun, be mine alone. At least until the dawn breaks.