We get some tantalizing hints at the nature of the curse, and discover that Tohru isn’t the only one trying to work against it…

Tohru: If the future Akito-san talked about is true, and it’s because of the curse, then I want to break the curse. […] I just couldn’t ask the members of the Zodiac about it directly, so please…if you know anything about the curse, please tell me.

Kazuma: Why do you feel the need to beg me? Why do you feel compelled to do this? (internally) You’ve already done more than enough for us. You’ve done so much for us all. (aloud) […] I’m going to be honest with you. Regarding the curse and a way to break it, I can’t say anything definite. But as for Kyo being locked up and the members of the Zodiac being forced to live in the Sohma compound, that is a possible future. Of course I intend to put up a fight to prevent that from becoming a reality. But the sad thing is, the members of the Zodiac don’t possess the strong will needed to defy Akito. […] Because they all harbor intense feelings toward Akito. […] Tohru-san, I have never been afraid of Akito. He’s like a little boy. All he knows how to do is shout and cry hysterically. He’s a fragile, unstable child. However, Akito is special to the members of the Zodiac. He’s like a god to them. Someone to be feared and respected. Whether they’re weak or strong. From him, words of rejection that would be mere talk coming from anyone else’s mouth are so emotionally wounding that it feels like they’re being torn apart.

Well, this all totally makes sense – it’s nothing we couldn’t have picked up already, but Kazuma has clearly put a lot of thought into this.

Kazuma: It’s hard for someone on the outside to understand what’s between them and Akito. They’re in a “world” all their own. They’re connected by the blood that courses through their veins. It’s a bond of blood.

Tohru: That “bond” is the curse? […] A “bond” is supposed to be something sacred. (internally) If so, then maybe my desire to break it is deserving of punishment. Maybe it’s even impossible to break.

She thinks of her own “bond” with her mother…and it’s pretty clear she’ll have to seriously reconsider the one if she’s really earnest about breaking the other.

Kazuma: (internally) To be honest, I hadn’t wanted her to know about Kyo being locked up. Such selfishness. I’m using Tohru-san, but to what purpose? What more do I want? What am I looking for? No matter what happens, we are the ones responsible. We can’t change anything. We’re powerless to do anything except sink into a dark world. (aloud) […] Keep being yourself, no matter what. I think that’s the most important thing. […] (internally) And in that way, I hope the time he spends with you will become his strength, so a new bond will form.

Kazuma doesn’t spell it out to Tohru, but he must have concluded that the only way to break Kyo’s bond to Akito is for him to form a new, stronger bond with someone else (and even if the curse isn’t broken, he’ll still have that bond to rely on in some form).  It’s essentially the opposite of Shigure’s approach of “shake everything up until it explodes”, and it makes so much more sense in the context of actual human relationships.  Bonds need time and support to form, but once they’re there, people will tend to cling to them that much tighter in the face of chaos. 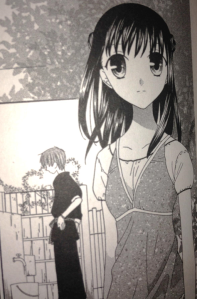 Speaking of bonds, Kagura’s been out of the loop since she missed the vacation.

Kyo: Kagura. We need to talk. You and me. There’s something I gotta make clear. I –

Kyo outgrew her long ago, but he always lacked the resolve (or frankly, tact) to make Kagura face up to that.  Now that he’s preparing himself for a life of solitude, he knows that he just doesn’t have time to waste on her.

Tohru runs into Rin on her way out from Kazuma’s. Tohru acts like she always does, while Rin warns her to stay away from the Sohmas (so basically, what she always does).

Rin: I saw that girl leave. Why did she come? Did something happen?

Kazuma: She came to ask me the same question you did.

So Rin has also been looking for a way to break the curse…although I can’t imagine she benefited much from Kazuma’s insights. 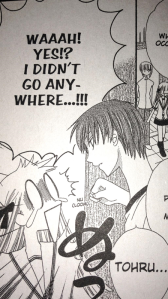 Somehow Tohru manages to avoid suspicion, but Kyo isn’t quite so lucky. Shigure rapidly sniffs out his date with Kagura.

Yuki: You have the free time to go on a date, but not to pick up Honda-san at work? You’re terrible.

Kyo: That’s got nothing to do with this! And anyway, that’s your job!

We finally get to consider what makes Kagura tick…