In which we explore how Steven and Amethyst’s relationship is shifting (mostly for the better). 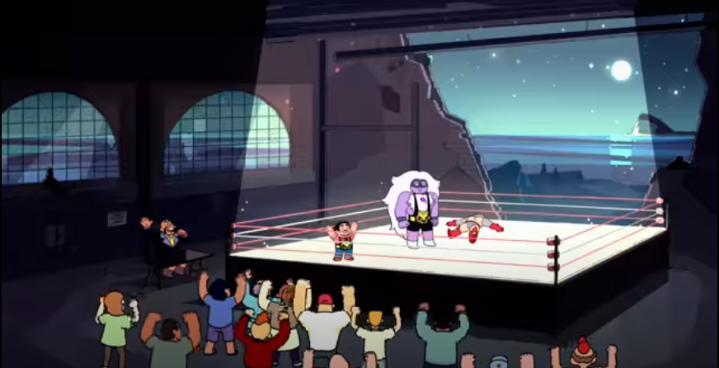 The story kicks off when Amethyst unceremoniously quits the wrestling league she and Steven had apparently been dominating since Season 1.

Steven: Did you really mean what you said? About being through with wrestling?

Of course, if it’s not fun anymore, Amethyst has every right to choose to stop, but it seemed to be a spur-of-the-moment decision that she clearly hadn’t run by Steven, leaving him a little lost and confused. 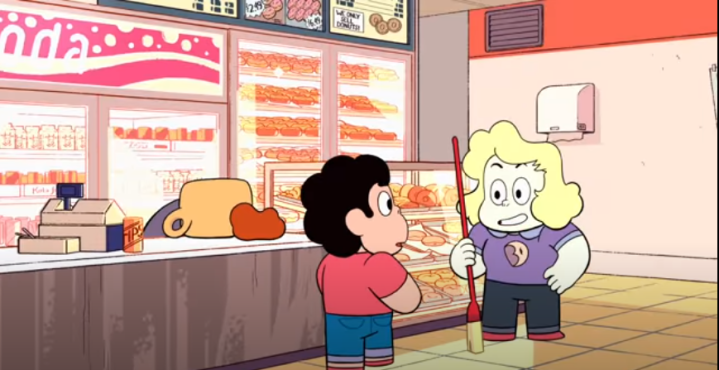 Enter Lars with his own strong wrestling feelings.

Lars: Tiger…he left wrestling at the height of his career! Why?

Lars: You and your theory! Steven is not Tiger! Tiger’s ripped and like, seven feet tall!

Steven: Well, I heard Purple Puma didn’t want to do it anymore.

Lars: So what? Just because Purple Puma quit doesn’t mean Tiger has to!

Steven: I also heard Tiger didn’t think of that…

Lars: Well he should’ve! It’s the least he could do for his fans.

Steven: Tiger Millionaire is gone forever. He retired to his huge pile of money, but he realized it didn’t make him happy. So here I am, ready to give back to the fans: Tiger Philanthropist!

It turns out he’s perfectly capable of winning by himself, but he misses Amethyst, and so his heart’s clearly not in it.

Even LARS can tell something’s off.

Steven: I heard Tiger Millionaire was back! He’s your favorite, right?

Lars: Yeah, but he came back as some lame Tiger Philharmonic-donations thing, which, honestly, is such a weird angle, you know? The whole thing just felt so off!

Steven: What do you mean, off?

Lars: He took off his tie and he’s throwing money at everybody? It’s like the sequel no one asked for.

Steven: What? It’s the sequel you asked for!

Lars: Well, he just didn’t seem into it, you know? He used to care about his money – now he’s just giving it away! And he still just wins, like, every match.

Steven: Oh, I get it. You want him to lose, and keep his money, right?

Steven: What do you want him to do? Just tell me!

Lars: I don’t know! I don’t even know what I want for breakfast half the time! I’m a complex individual teenage boy! Now get out of here and stop taking such a personal interest in my happiness and wellbeing!

Steven is understandably frustrated and confused. 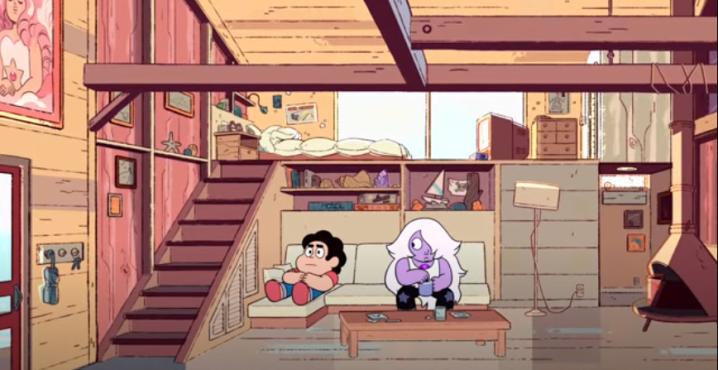 Fortunately, Amethyst is still willing to talk things out after the fact.

Steven: I don’t get it. I don’t even know why I’m wrestling anymore. I guess I’m doing it for Lars? And he doesn’t even care! I liked it better when I was doing it for you.

Amethyst: But who needs it, you know? I mean, I needed it when I felt like I wasn’t good enough. But I don’t feel like that anymore. Do you?

Steven: No. No, that’s never why I was doing it. I just liked that it was our thing we did together. But you’re right, it doesn’t make sense anymore. I should just do what you did, just tell everybody I’m quitting and leave like it’s no big deal.

Amethyst’s reached the point where she doesn’t need a violent outlet for her frustrations anymore, partly because she’s less frustrated and partly because she’s developed a better support system (as hinted by the fact that she’s drinking tea – something she picked up from Vidalia).  Steven was initially doing it “for” Amethyst, but over time it just became a fun pastime for him to do with her.  And even now that she’s “over it”, he still feels like he owes something to the place, if only for all the fun times they had there. 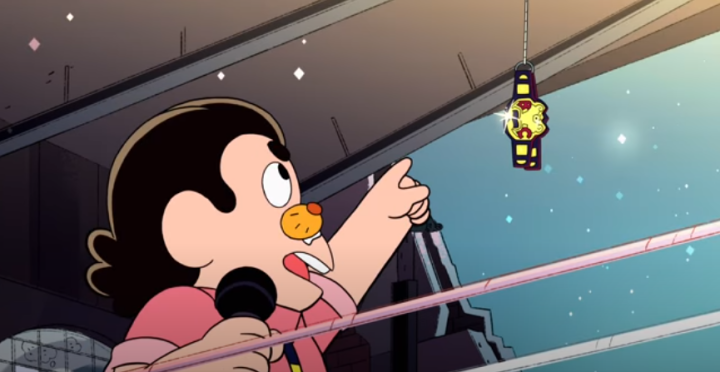 Steven: Tonight will mark my greatest and finallest act of philanthropy: Tonight, I am giving away the Tag Team Title! Whoever can grab them first, can have them!

He knows that there’s no point him wrestling without Amethyst, and apparently he couldn’t think of a better way to exit the ring.  But fortunately, Amethyst could.

Amethyst: Woah there, Tiger! […] Those belts aren’t yours to give away! Those times we wrestled together meant everything to me! You can give away all the jungle bucks you want, but I will not stand by and let you give up our memories!

Steven: You came back!

Amethyst: I’m sorry. This was our thing we did together, and I just quit on you!

Steven: It’s okay. You were right – we don’t need this anymore.

Amethyst: Well, how do you wanna go out?

Steven: With a bang.

They end up letting another team beat them, because it’s only fair that the new champions make a show of beating up the old ones.

Lars: How can this be happening? It was just getting good! You can’t quit now! Tiger!

So everyone’s finally satisfied (even if Lars isn’t exactly happy) and they can all move on with their lives! This episode draws a direct parallel to “Tiger Millionaire”, and it is sadly lacking in comparison.  It’s not bad, but where that episode trusted the viewer to intuit a lot of the character development, this one spells out what all the characters are feeling.  It does make a degree of sense, considering that Amethyst has gotten a lot better at expressing her feelings (especially to Steven), but it’s still a bit disappointing.