Well, it’s not the strangest houseguest we’ve had…

I’m not a fan of Ronaldo, but this might be my favorite Ronaldo episode.  He pulls a lot of crap, but at least he gets called out on it for once.

Steven: Ronaldo, wait! What is this?

Ronaldo: Well, technically it’s an infozine pamphlet, but I’ve been calling them Ronalphlets.

Steven: I get that part. I’m talking about all this mean stuff you’re saying about the Crystal Gems!

I mean, Steven and Amethyst sure like rock, but don’t go making generalizations about ALL the Gems’ taste in music! 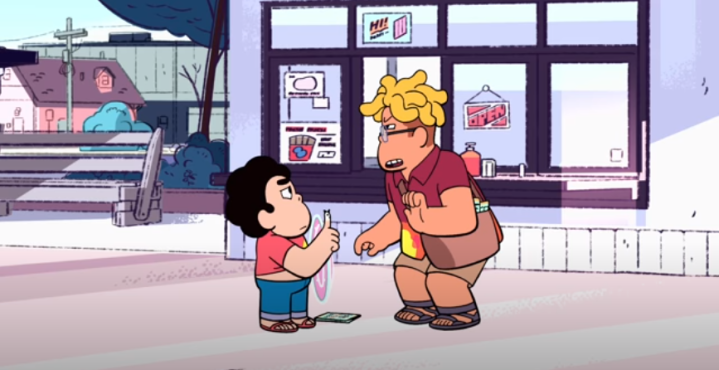 Ronaldo: Rock people are different, obviously. For starters, they have rocks embedded in their bodies. […] But they can summon weapons from the mud dimension! No no, you’re not getting it. They can alter their forms! That’s how they trick humans into loving them! Aw! Wait a second…you’re a rock person?

Steven: I’m a Crystal Gem, Ronaldo. And you’re not wrong about everything, we’re just ignored and misunderstood.

I do find it amusing how Ronaldo seemingly came up with all this just through the power of conspiracy theories!  Even the fact that the Crystal Gems fight “rock people” is technically true.

Anyhow, after realizing that he’s kind of been slandering the Crystal Gems, Ronaldo decides to go home and rethink his life. 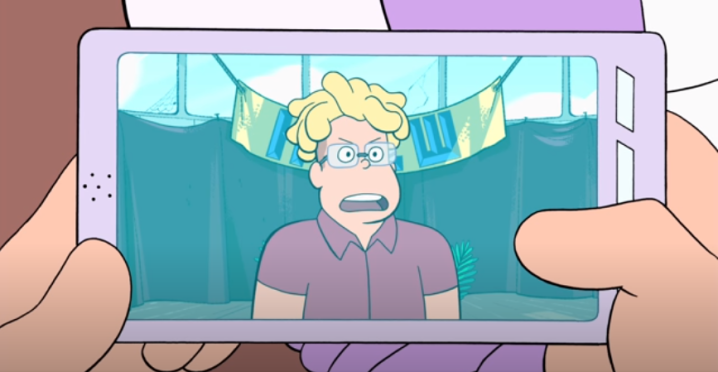 Ronaldo: Good day, loyal followers of Keep Beach City Weird. I’ve come to you today because I pride myself in bringing you the truth about all the weird stuff in Beach City the Man doesn’t want you to know about. But today, I need to tell you some truths about this man! I’ve mixed up what is right and wrong, and ended up saying some pretty mean things about the Crystal Gems. I feel terrible about my mistake, because I know more than anyone what it’s like to do thankless work and to be an outsider. That’s why I’m joining the Crystal Gems!

Pearl: Uh-uh, no, you are not living here. And you certainly can’t join the Crystal Gems.

Garnet: You don’t have a Gem. Your body is organic.

Steven: My body’s organic, and I’m a Crystal Gem.

Pearl: You’re going to entertain this?

Steven: We’re all different, but we love and accept each other. That’s what Crystal Gems do. And isn’t it great that someone is actually interested in what we do? What better way to show him what we’re about than to accept him as a Crystal Gem, too?

That speech is enough for them to tolerate Ronaldo’s presence in the Temple, and Steven’s the only one who actually has to live with him, anyway.

Ronaldo: So, when do I get issued my gem?

Steven: Oh, it doesn’t really…but if you had a Gem, what would you want it to be?

Ronaldo: Well, I care so much, I think it’d be, like, deep in my heart, or a million tiny gems, like, one crushed up gem coursing through my blood! Like, like…Bloodstone!

Ronaldo: Wait, check it out! I have a Gem weapon now, too!

Of course everything’s fine while Steven’s just in “welcome to the club” mode (it turns out the sword’s only a replica, though), but then an actual mission comes up.

Pearl: Uh, I’m sorry Bloodfry. You’re gonna have to sit this one out. It’s a bit dangerous.

Ronaldo: But Steven gets to go.

Garnet: Steven is different. He’s been training with us for years.

Steven: Don’t worry, Bloodstone. I didn’t get to come along at first, either. We can start your training soon. Be back in a bit!

Ronaldo: But…I’m a Crystal Gem, too. 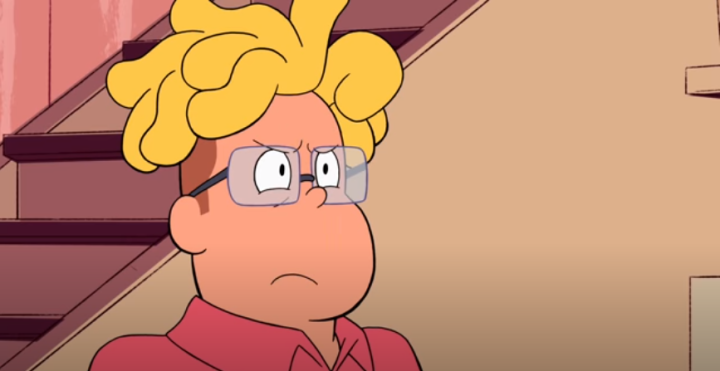 Yeah, sorry Bloodfry, you don’t get to steal that line from Steven.  You literally just “joined the club” and have done absolutely nothing except move in to Steven’s room.

But that’s when he flips a switch in his attitude.

Ronaldo: Well, I just think a real Crystal Gem would want to show off their Gem, like, all the time. If I had a Gem, I’d show mine off. 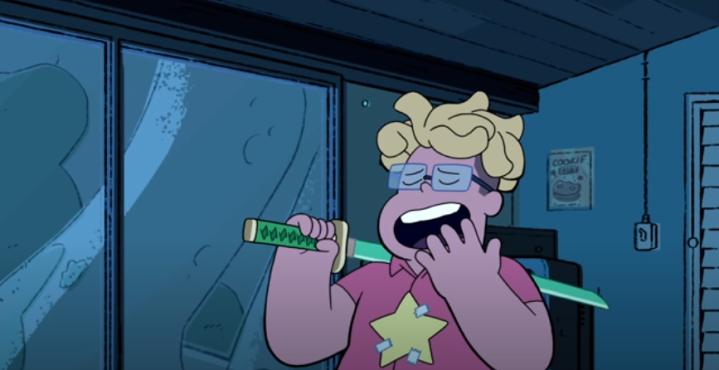 Ronaldo: Ever since I became a Crystal Gem, sleeping…I don’t do it…

And naturally, the thing that gets Steven riled up is an argument about Connie.

Ronaldo: Her Gem weapon’s a sword, huh? She totally ripped that off from me.

Steven: What? That sword belonged to my mom!

Ronaldo: How come I don’t get your mom’s gempon? That’s gem and weapon.

Steven: Well…Connie’s been part of the Crystal Gems longer than you, so…

Ronaldo: Admit it. She’s just in because she’s your girlfriend

Steven: What are you talking about?

Ronaldo: She doesn’t even live here! I’m here all the time! […] If she was a real Crystal Gem, she’d be a little bit more dedicated!

I mean, he’s not completely wrong, but the reason she doesn’t live there is that she actually has a life.

Steven: Are you serious? Bloodstone, ever since you got here, all you’ve done is boss me around! Who are you to tell anyone how to be a Crystal Gem? You’re just- you’re just – a guy with a blog!

Ronaldo: Is that love? Is that acceptance? Maybe you’re the one that isn’t a Crystal Gem. I think you need to leave, and think about stuff. 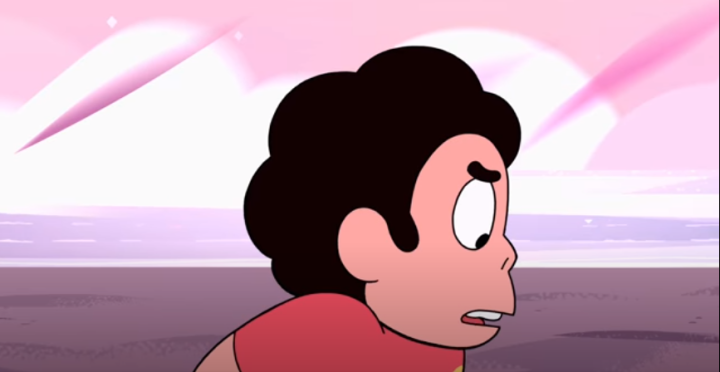 Steven: What is my problem? I just wanted to be included. If I were really a Crystal Gem, I’d never…wait a second.

Then he finally realizes he needs to take back his home because Ronaldo is just a leech at this point.

Steven: Bloodstone! We need to talk. You’re right. The Crystal Gems are about love and acceptance. But you’ve been acting really mean to me, and I don’t love that, I don’t accept that! I wish I hadn’t snapped at you, it’s just…I really thought you joined because you were interested in the Crystal Gems, but the second it wasn’t about you, you stopped caring. This isn’t the Bloodstone club about making Bloodstone feel good! This is my whole life! Do you care about that or not?

It’d be one thing if this was just some club they’d made up on a whim, but the Crystal Gems actually have important goals and responsibilities, and “Bloodstone” wasn’t even making an attempt to understand what they were doing or why, which is just insulting to all the other Crystal Gems who have actually sacrificed things for the cause.

Amethyst: Woah! You truthed him so hard he died. 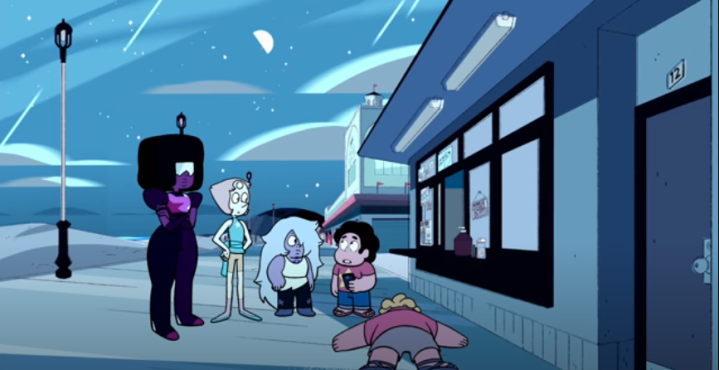 Of course it’s only the lack of sleep finally catching up to him, so they drag him back to his house and let the Frymans know he’s back.

Steven: Do you think he’ll be okay?

Thank you, Amethyst.  This is a lesson that people like Steven need to learn eventually (and it usually takes a long time): You can’t take care of everyone.  Some people you just aren’t capable of helping, but more often than not it’s more of a case of you could help them, but it would drain a ton of your time and energy which might be better spent on more fruitful endeavors.  I don’t believe there’s such a thing as a truly irredeemable person, but there are plenty of cases where a “redeeming” relationship that’s mutually beneficial is impossible.

Fortunately, in this case, all they really needed was a little space (and plenty of sleep for Bloodfry).

Ronaldo: I took a real long nap, and then I did some hard thinking. I wasn’t acting like Bloodstone. I was acting like Jerknaldo. You accepted me, but I still felt like an outsider. I guess even amongst outsiders, I am the ultimate outsider. I think it’s better Ronaldo Fryman work alone.

He essentially resolved to switch to pro-Crystal Gem Ronalphlets, and I guess that he’ll always be alone, which sure, go ahead, knock yourself out (again).

Ronaldo: Hey, but, uh, Ronalphlets aside, can I ask you something?

Ronaldo: Why don’t you use your Gem name?

Steven: Oh, my Gem name is my mom’s name. Actually, the only time Gems really call me that is if they’re about to kidnap me or beat me up.

Ronaldo: That’s rough, buddy. You want me to put that in the Ronalphlet?