This is a prime example of worldbuilding with minimal dialogue (but still with a heart).

Steven discovers that his healing powers are working again when he successfully “heals” a rip in his teddy bear (I guess it’s supposed to work on non-living things after all).

Steven: Now that my healing spit is back, maybe I could-

Steven: But I didn’t even ask anything yet!

Garnet: With my future vision, I can see you’re going to ask if you can use your power to heal one of the monsters in the bubble room.

Steven: Can you see if I’ll get you to change your mind?

But she just can’t say no that face.

Steven: It’s Centipeedle. If I can help any of them, I want to help her first.

His spit certainly does something, as she takes on a more humanoid form and generally acts less animalistic, but she still can’t talk and doesn’t seem to remember her previous encounters with Steven.

Garnet: This is the best we’ve seen it work.

Pearl: But it didn’t work. I guess it’ll take more than a kiss to heal damage from the Diamonds…

Steven: But why? My healing powers are back, I should be able to do this.

This is the first time they’ve tried to explain what the deal is with the Gem “monsters”.  Corruption appears to be a symptom of mental/physical trauma for Gems, which makes a lot of sense considering how their physical forms are something of a manifestation of the mind. 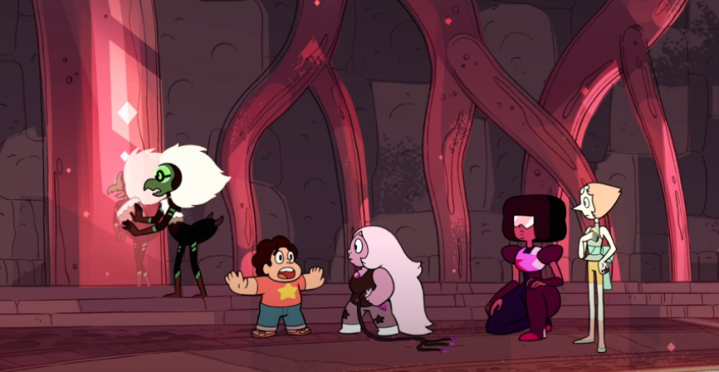 But when the others conclude that Steven can’t help Centipeedle anymore, so she should be bubbled again, of course Steven objects.

Steven: No, please! She can walk and talk, just like you guys! See? I helped her this much, maybe I can help her more. I have to try, I made a promise! Please?

Pearl: What are we gonna do with her, let her move in?

And of course Garnet loses another battle of wills to Steven.  Because he is precious.

Steven: Your memories are still in there! I just have to draw them out. Oh! I know how we can talk, even if your voice is messed up. […] See? This is an Earth crayon. I bet you Gems are used to super-advanced space crayons, but we make do.

He starts out trying to communicate through writing.

Steven: It’s okay, I have another plan! We’ll just talk through the language of art!

Thus we see Centi’s story as told through childlike doodles (and narrated/interpreted by Steven).  It’s a surprisingly effective way to communicate her backstory, and in turn, the general story of all the corrupted Gems they’ve been fighting.

Steven: You’re saluting someone. Your commander? She gave you an order. You, and your crew, and your ship. Woah, lots of ships. You flew through space, towards Earth. You landed, and started building stuff. But then…the Gem War. You joined the fight. You and your crew kept going. 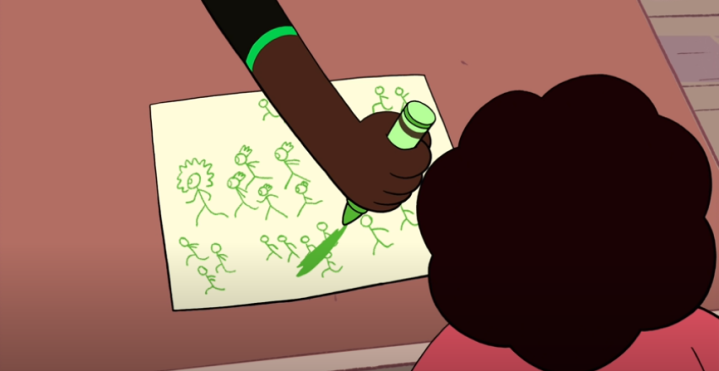 Steven: You got separated, but you were still fighting. Then, new orders from your commander, to retreat. Everyone’s running, but from what? You don’t know. Where’s your crew? Where’s your ship? You stopped. You heard something, from the sky, a sound – a song? And then…Centi?

They keep making me feel sorry for this poor creature.

Steven: That light, where did it come from?

Damage from the Diamonds…

So basically, Centi and her crew were part of the initial invasion/colony, then they got caught up in the war and she got separated in the confusion of a sudden withdrawal, evidently in anticipation of the Diamonds unleashing a powerful attack on the planet.  I initially thought they hit it with some sort of corruption beam, but no, the corruption was more of a side effect than anything.  Between the trauma of the war, the sudden shock of abandonment by their superiors, the physical trauma of whatever weapon they used to wipe Russia off the map, being trapped on an alien planet, and the ensuing lack of guidance, it’s little wonder they turned into monsters.  That might also explain why they tend to gravitate toward the Crystal Gems – fighting them would have been one of their last orders, and some of them might have just mindlessly carried that on.

After she finishes her story, Centi starts to revert despite Steven’s best efforts, but he figures out she wants to go back to her ship…and apparently there was only one ship left behind from the invasion.

They find some other Centipeedles there, and the other Crystal Gems arrive before things can get too awkward.

Steven: You guys were right after all. I couldn’t help Centipeedle.

Evidently those scribbles she started out with was the written Gem language, which explained all the stuff that she eventually told Steven through pictures.

Steven: You look so happy here. Can we let the Centipeedle stay?

Garnet: You can put those puppy dog eyes away, Steven. This ship is their bubble now. 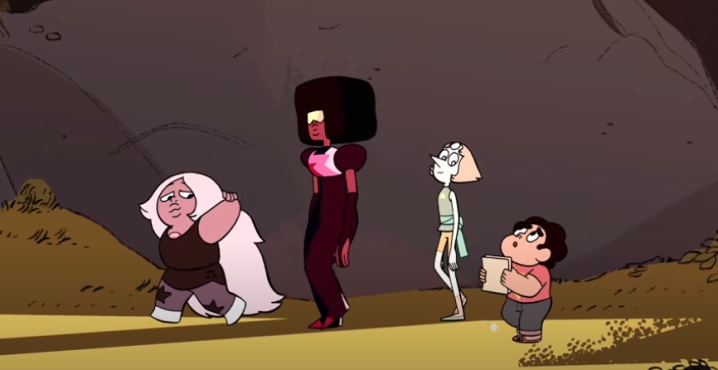 This episode introduces the concept of corruption, which is actually a key part of the overarching plot of the series (and as such it made a lot more sense upon a rewatch).

Steven: Pearl! Will you teach me to write in Gem?

Pearl: Oh Steven, it’s very complicated, and you won’t have much use for it.