Stevonnie takes the stage again in a surprisingly serious episode.

Steven: This car’s great! But I think it might be too small to live in.

Greg: Eh, the van’s still home sweet home. I just thought now that I’m swimming in dough, why not get a new car?

Connie: New car? But it’s got this big “used” sticker on it.

Greg: I like to think of it as more “experienced” than used. This baby’s a Dandai Supremo, from the era of frosted tips, mood rings, slap bracelets…you know, before you kids were born.

Connie: What a time time to be alive.

I REMEMBER ALL THOSE THINGS. This show is making me feel old.

So Steven’s using the “new” car to practice driving (which actually makes sense now that I think about it – he IS 14, which is when most Americans start driver’s training).

But alas, this can’t just be a cute episode with Connie and Steven. 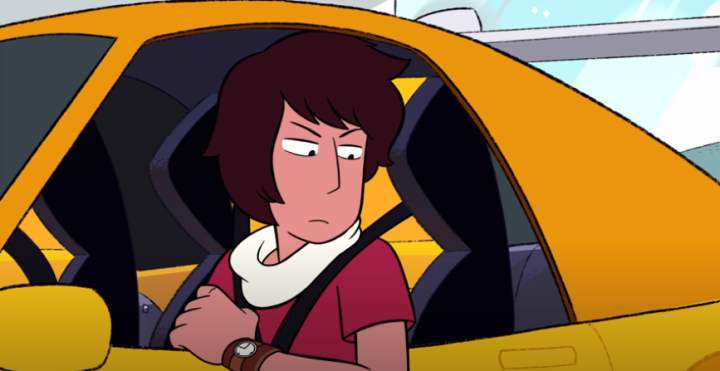 Because they need to talk about Kevin.

Kevin: Woah, wait, wait! Careful with the tires, grandpa. I’ve got a big race today, and my car has to look as beautiful as me.

Steven: Back off, Kevin! He’s not a grandpa! He’s just a regular pa!

Kevin: Have we met before? I think I’d remember a twerp like you.

Connie: You-you just look like another guy we know.

Steven is actually really upset for once.

Steven: It’s a strong feeling, too.

Greg: Do you know that guy?

Connie: Well, kinda. When we fused into Stevonnie we met him at the dance, and-

Connie: He kept asking us to dance with him, even though we said no. It was really…uncomfortable.

Steven: He didn’t even care about how we felt! At all!

Greg: I had no idea that happened. I’m really sorry. That guy, he’s not even worth the time of day. Don’t even give him the satisfaction of thinking about him.

As I’ve mentioned before, I do appreciate how this show addresses consent in a kid-friendly fashion.  Just because it’s not assault doesn’t automatically make it okay or not traumatic.  The show’s pretty consistent with its messaging on this front: If someone is uncomfortable or unsure about something you want to do with/to them, don’t do it.

Connie: I’m thinking mad. I still feel like there’s something big I want to say to him, you know? Something to make him think. Like we’re thinking.

Steven: Yeah. Too bad we can’t just race against him. To use the first place ribbon to wipe that smug look off his face!

Steven: …We weren’t kids when we met Kevin.

Hey Connie, unless things work differently in your universe, it’s not illegal for kids to drive, it’s just illegal to drive WITHOUT A LICENSE, which kids can’t get (and Stevonnie also lacks), but evidently we’ll be overlooking that little detail.

Anyhow, this whole exchange kind of echoes “Keystone Motel”, because the situation is basically a toned down (and abbreviated) version of Garnet’s arc last season.  In all ways except one this conflict is much less serious than Garnet’s: It’s Steven’s (and probably Connie’s) first experience with this sort of thing.  Honestly, I wonder if Steven might’ve brushed it off if it had just been him and not him and Connie, since he’s so much more concerned about other people’s happiness.  But since he was hurt, I’m not surprised that he’s held onto it.  People hide their feelings by burying them; they never just vanish.

Apparently, everyone else hates Kevin, too, considering that Stevonnie gets nothing but cheers from everyone else at the (underground?) race

Kevin: That’s why I knew those brats at the car wash! They’re you! Your whole “two kids in a beautiful trenchcoat” routine won’t fool me this time, so don’t even try it.

Stevonnie: You don’t know what you’re talking about. I’ll show you what I’m made of when I beat you at this race! 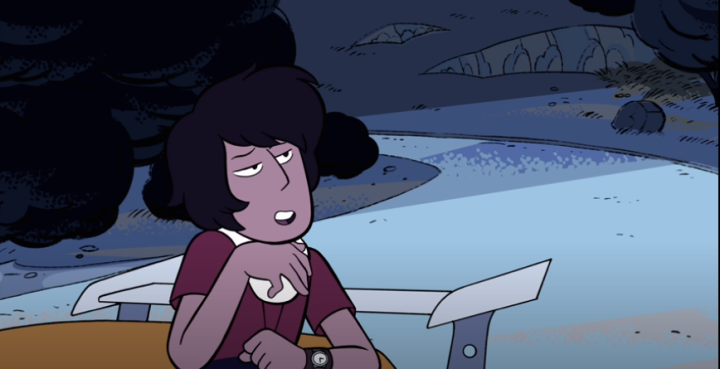 Kevin: You’ve had a taste of Kevin, and now, you’re obsessed. […] I get it. I have that effect on people. It’s cute, but aren’t I a little old for you?

Well, he certainly has an immensely punchable face. 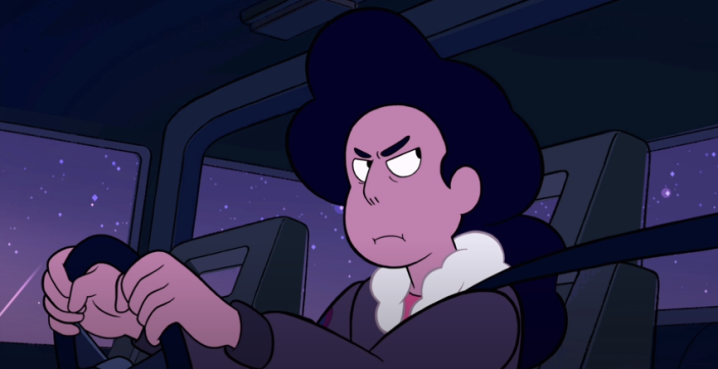 Kevin: You know, this mountain pass has some really beautiful views. Shame you’ll only be seeing my taillights the whole time.

Even though Kevin has a fancy new sports car, apparently Greg’s car is on pretty even footing coming down the winding mountain roads.  But they still don’t manage to pass him, and he consequently taunts them and is generally an infuriating jerk.

Stevonnie: What’s happening? Kevin…no! We have to beat him! He deserves to lose! 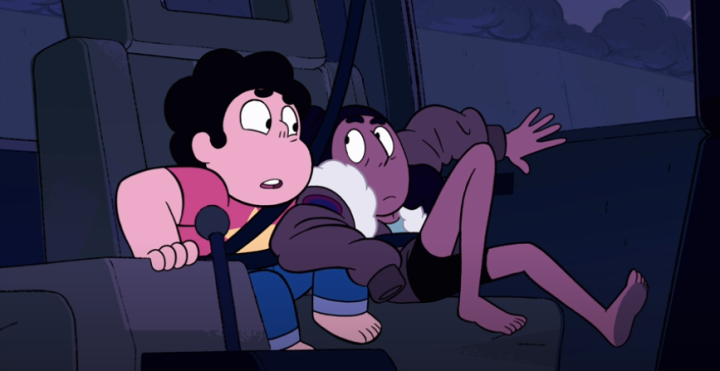 It’s at this point, halfway down the mountain, that Connie seems to come to her senses.

Steven: What are you doing?

Connie: What are we doing?

Steven: We’re getting Kevin back! We’re about to beat him at his own game!

Connie: Yeah, but why do we even have to play his game?

Connie: I know! So why should he get to have any say over how we feel?

Steven: We are obsessed with him.

They’re on his turf, and whether they actually win or not, he’s managed to get under their skin even more.  When you focus your energy on revenge, it only means you’re focusing energy on the person you hate, energy that could be much better spent on people you like.

Connie: I want to finish this race. But not for him.

Steven: Right. For us.

Somehow they manage to catch up, and because this competition apparently rewards focus and motivation more than actual skill (kind of like the duels in Revolutionary Girl Utena), they finally take the lead.

I love this show.

Kevin ends up using some sort of special turbo mode to finish first anyway, but they’d already stopped paying attention to him.

Stevonnie: You know, Kevin, you were right.

Kevin: I know! About what?

Stevonnie: The view from the mountain was pretty great.

Kevin: Hey! Don’t try to teach me a lesson, you lost!

Stevonnie: Second place isn’t so bad, for my first time driving a car.

Then Stevonnie just drives off without another word and it is beautiful.

One thought on “Beach City Drift”