I am constantly amazed at how much thought went into developing side characters like Lars.

Sadie: Would you want to come by my place? I know it’s kind of been a while, but we could get some food and watch some movies.

Sadie: Well, I hope you guys have fun together.

Lars: Yeah, we will.

So Lars and Sadie are doing their usual thing (that is, Sadie being friendly and Lars holding out for the Cool Kids to like him), while Steven looks on and wishes that Lars wasn’t such a jerk. 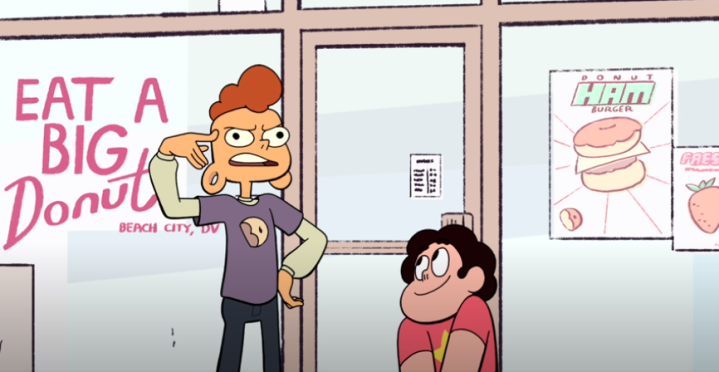 Steven: Hey Lars, why didn’t you want to hang out with Sadie?

Lars: I see her at work! Why do I need to see her on my day off?

Steven: But aren’t you gonna get married and have kids and name one of them after Uncle Steven?

Lars: Oh, let me think – no! Me and Sadie aren’t getting married, we’re not even dating! And if she thinks we are, that’s her problem.

Steven: You’re lying! I know how you feel about Sadie!

Lars: You don’t know what you’re talking about! So butt out! Go annoy someone else, you little weirdo.

To be fair, Lars and Sadie’s relationship IS pretty complicated, and Steven really doesn’t know that much about his life outside the Big Donut.  I kind of doubt LARS knows exactly how he feels about Sadie, let alone Steven.

Still, Steven goes home frustrated with Lars and thinking that he knows how to solve all his problems (or at least “fix” his relationship with Sadie, which Steven sees as one of Lars’ bigger problems).  And then he gets a chance to do just that.

Lars: Woah…wait a minute! This isn’t the temple…this isn’t my voice! I’m Lars? I’m naked! I must’ve jumped into Lars’ mind. I guess while I’m in here I’d better do my best to respect Lars’ body. And his privacy.

I love how the animators transpose some of Steven’s expressions and body language onto Lars…and how strange it looks.  They never do bother trying to explain how this happened, but my theory is that it’s something like how Steven possessed the Watermelon Stevens, so perhaps it has to do with overpowering weaker-willed people.  But he never doubts his mission: To show Lars a better way to live.

So we finally meet his parents, who clearly don’t know what to do with their boy now that he’s trying to be “cool” – their niceness made me wonder if they were actually his grandparents, but no, he’s supposed to be their son and they’re just totally disconnected from his life.

Martha: Please, Lars, we let you move into the attic, and your grades are still below average. All we’re asking from you is a little effort!

Lars: Wow. You guys seem so nice! I’m sure I don’t want to let either of you down. I, Lars, promise to go out and do my very best at being your son! 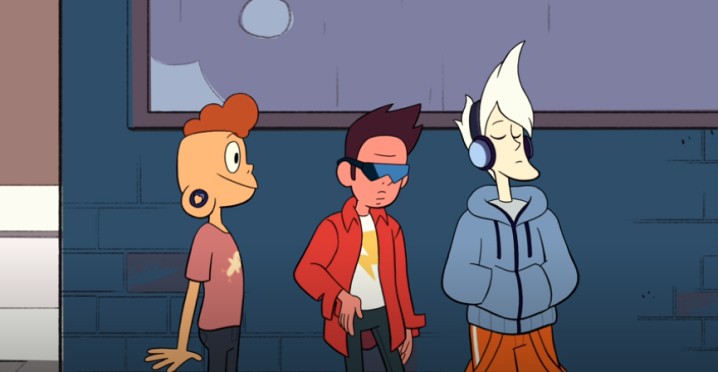 The next people he runs into are the Cool Kids, who don’t seem too thrilled at his initial approach.

Jenny: Oh, hey Lars. […] Ugh, Dad made me work this morning. Now I stink like pizza and fish!

Jenny: Lars! What a nice thing to say.

Lars: I can say way nicer stuff! Like you’re really cool and pretty and fun to be around.

Jenny: Lars, this is so unlike you!

This episode kind of reminds me of playing a visual novel – specifically the initial run where I inevitably try to be good and benevolent to all the characters regardless of any established characterization.  This is clearly how Steven would play a VN, too.  Except this is an actual person who will have to live with the aftermath of Steven’s meddling…

Anyhow, the Cool Kids end up inviting Lars to a dance competition, but then Steven-as-Lars remembers what brought him into the situation in the first place.

Lars: There’s someone who needs me more… 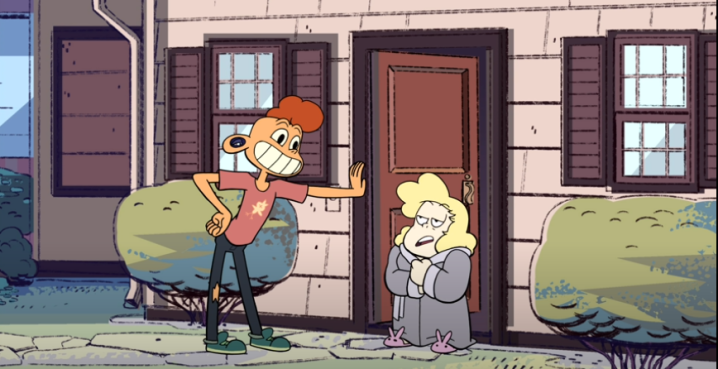 Sadie: Well, if it ain’t the human boomerang, always coming back to me.

Sadie’s the most awkward around “the new Lars”, because she’s actually accustomed to “the old Lars”, not to mention that they clearly have a messy history together that Steven isn’t completely aware of.

Sadie: What is with you tonight, huh?

Lars: What do you mean?

Sadie: Look, it’s like, yesterday I asked if you wanted to come over, but you made a big deal saying “no” in front of Steven. And now…you’re here? It’s just, it’s getting to be kind of a roller coaster, isn’t it?

Sadie: It’s like, you’re one way in private and a different way in public. You act like I don’t know you don’t want to be seen with me, but I do know. I’m not stupid.

Sadie: It’s just, I need to know. How do you really feel about me?

Lars: Isn’t it obvious? I love you!

Sadie: What are you doing?

Sadie: Are you kidding me? Alright! I get it. I see how it is. Some cute little heart gauges, some dumb fluffy movie, that’s enough for Sadie! Right Lars?

And this is where Steven’s plan falls apart.  Since he’s generally kind of a jerk, most people just don’t let Lars get close to them – the only exceptions being Steven and Sadie.  Steven’s just conditioned to see the good in everyone he meets, but his relationship with Sadie is a lot more complicated, because they do push each other away at times, in both healthy and unhealthy ways.  He’s gotten close enough to hurt Sadie, and even if he could change overnight and suddenly become “nice”, it wouldn’t make up for the pain he caused her before, and that’s not the person she fell in love with, anyway.  So it only makes sense that she’s the first one to call Steven’s bluff.

Sadie: I understand enough! You’re only my “friend” when it’s convenient for you! Just get out of my life!

Lars: I’m not Lars! […] I’m Steven. I just woke up this morning with my mind in Lars’ body. I didn’t mean to hurt your feelings like this! I’m sorry.

Sadie: Okay, maybe you are Steven. Lars would never apologize to me. Wait – so does this mean Lars’ mind is inside your body?

Lars: Maybe we should check?

Because Sadie is good at thinking of practical matters, like where Lars’ mind might have got off to.  Also it’s kind of incredibly sad that she recognizes Steven because she’s sure that Lars would never apologize to her.  She deserves better! 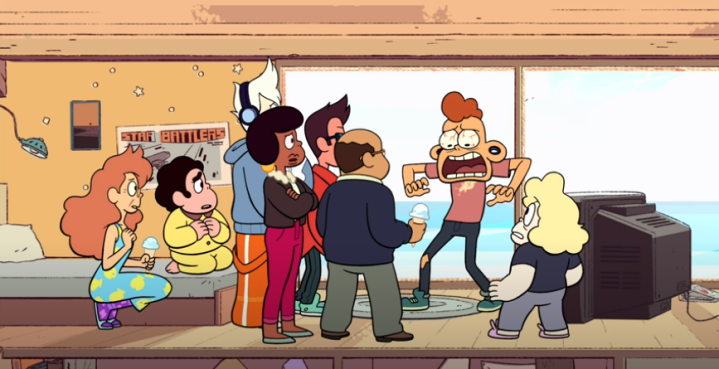 Lars: Huh? Sadie? How did I get here? What are all you doing here?

Lars: You! What did you do?

Steven: I spent the day with my mind…in your body.

I mean, you can’t say he’s wrong to feel a little violated.

Lars: I was acting weird all day and you all just liked it?

Of course Steven had good intentions (there’s not a mean bone in that kid’s body), but the main result is that Lars is feeling more self-loathing than ever now that he knows how much more people liked Steven’s version of him than, well, himself.

Steven: I hope I didn’t ruin your friendship with Sadie.

Lars: With Sadie? Oh, what did you say to her?

Steven: I…said that you loved her.

Lars: And what did she say?

Steven: She thought you’d only say something like that to hurt her…

Lars: Yeah, I guess she’s right. Maybe that’s why everyone liked the you-me better than the real me.

Lars: Ugh. Every day in Beach City is weird. That’s why I hate it here.

Sadie: It’s good to see the real you.

Their relationship may not be the best, but at least it’s good for Lars to know someone likes him for who he is, warts and all.

It’s nice that the show is able to get back to smaller matters after the whole “save the world” plot took up pretty much all the space last season.  The characters in Beach City are generally interesting, if not always likable, and I missed spending time with them.