In which we explore the fascinating relationship dynamics between an oddly like pair: Greg and Amethyst.

Greg: I haven’t really cleared this place out since your mom…maybe this is good timing! New year coming up – I should just get rid of all this stuff.

This episode uses physical junk as a metaphor for unresolved emotional baggage, so naturally Steven calls on Amethyst, the resident junk hoarder, to help clear out the storage unit.

Greg: No, I just thought you meant Pearl.

Steven: What? I’m not letting Pearl see this! Amethyst’s room is full of junk, she knows how to handle a mess.

Greg: I don’t know about this…

Whereas Pearl tends to display a level of dislike/disdain toward Greg, with Amethyst, there’s more of an awkward uncertainty to their interactions, like they still haven’t quite figured out how to feel about each other after all these years.

Greg: Oh, no! How did this happen?

Steven: A photo of you and Mom.

That actually happened back in the second episode…but Amethyst seems a little upset by the reminder, and subsequently tries to distract them.

Amethyst: Hey! I found something that definitely doesn’t belong with all this junk.

Greg: Aw, man, Steven! We used to watch these all the time when you were little! You gotta see this!

Amethyst: Come on! Just one for old times’ sake.

On the one hand, I’m not entirely sure if it’s realistic for Steven to self-enforce the whole “grounded from TV” thing, but on the other hand, Li’l Butler seems like a really stupid sitcom that’s just not worth the risk of getting in trouble for watching TV over. 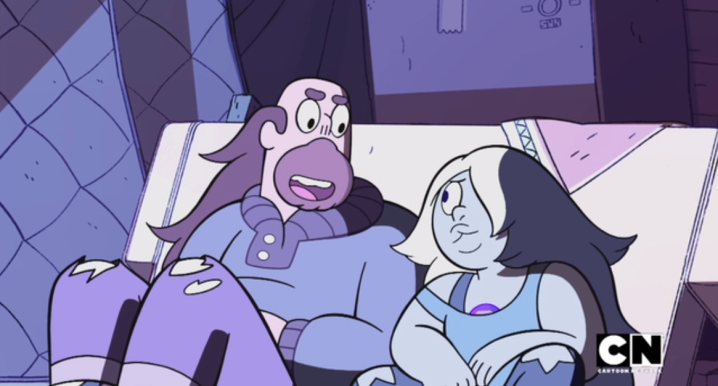 And thus we meet the original disaster combo!  And remember that if they share something of a resemblance, that’s probably (partly) intentional on Amethyst’s part…

So Steven leaves them to their videos (since they’re both apparently done trying to do anything about the storage unit).

Greg: You can always count on Li’l B!

Greg: Oh, Steven. What are you doing coming over so late?

I don’t know whether to be impressed by how many tapes they must have or horrified.  Also, for those of you who grew up with DVDs, there’s a reason the binge-watch model didn’t catch on until the 2000s.  VHS need to be rewound, or else you’ll end up rewinding them before you can play them.  Although I wouldn’t put it past these two to leave the tapes to be rewound another day.

Steven: I guess the storage unit can wait…

Greg: Yeah, buddy, that sounds like a good idea.

Steven: Want to just meet at the fireworks?

Steven: Okay…I’ll see you there.

Steven manages to find new uses for some of the junk he found at the storage unit (like his dad’s old sweaters or a box of books), but he’s really looking forward to the New Years fireworks.

Steven: Here’s some pots and pans – we’ve gotta make lots of noise. Dad and I do this every year. I brought some for Amethyst, too. They should be here any second.

Pearl: Why would she come with Greg? Are they hanging out again?

Steven: What do you mean “again”?

Garnet: They better not be watching that dumb show.

Pearl: Unbelievable, they really are! They used to disappear for days, watching those obnoxious tapes over and over, until…

Pearl: I don’t know. One day they just stopped.

Amethyst has gotten a lot of focus in this first season, partly because her struggles tend to be more relatable to a younger audience than the other Gems, but mostly because, well, the others both have some secrets which are key to understanding their characters that have yet to be revealed.  But even with all the development Amethyst gets, this element of her history with Greg is never fully spelled out, leading to quite a bit of speculation (often of the shipping variety).

Greg: What’s that? I’m missing the fireworks! It’s past midnight! How did I get so sucked into this show again? Ugh…

Greg: But Steven really wanted me to do New Years…

Greg: I wanted to be there!

So apparently they did this a lot when Steven was little (really little, judging by how Steven doesn’t remember the show), and I think it’s safe to assume that their initial falling out was also because of Steven.  Amethyst encourages Greg’s worse instincts, and it’s easy to see why he would want to try to be more responsible and be there for his son.  Overnight marathons are one thing when you’re in college, but that’s the sort of thing you just have to give up when you become a parent.  What I didn’t get when I first saw this, though, is what exactly Amethyst was there for (although I never subscribed to the theory that they were romantically involved).

Then Amethyst takes on her Steven form and puts on a Steven act, and in the light of the television it’s actually eerily lifelike.

Greg: Amethyst, you know how I feel about shapeshifting.

Amethyst: Geez, sorry. I was just trying to cheer you up. Oh, that’s right, I forgot, you’re so sensitive!

Greg: I know you like making me uncomfortable, but it’s not funny. I can’t stay here and humor you. I have to be there for my son!

Amethyst: And what about me, huh? I had someone who was always there for me until she started hanging out with you!

I think this is the key to understanding their relationship: They started hanging out when Steven was a baby – right after they lost Rose.  Greg was having to deal with the double whammy of losing the woman he loved and becoming a single parent simultaneously.  It seems that Amethyst looked up to Rose as something of a mother-figure, and at any rate she wasn’t getting the same kind of love and affirmation from Pearl or Garnet, who were similarly reeling from the loss of Rose.  So Greg was tempted to regress, and Amethyst took advantage of that and tried to monopolize his attention.  And when he tried to move on, she lashed out, as she’s prone to do.

Greg: Don’t do this, Amethyst, seriously!

Amethyst: I bet you’d stay for her.

This episode was legitimately hard to get through, because sometimes you are cruel to people you care about, trying to make them feel as bad as you do even though you know you’ll regret it.

Amethyst: Hey, Greg, turn around. Check it out!

Greg: I know you’re doing it! I want to be friends again, I really do, but I can’t let you do this to me again!

Steven: Stop! What are you two doing?

Steven: I get it. It’s hard to deal with stuff from the past. You want to put it off because there’s tons of it, and it’s really heavy, and it means a lot to you, so it’s hard to let anything go. But you gotta, because this thing is full! Seriously, when did you even have a cat?

It’s not like all that “baggage” is useless – but it will be if you keep letting it build up and never bother to sort through it.

Which Amethyst subsequently does.

Amethyst: I-I just thought we could take all this stuff back to the Temple. It can fit in my room. That way you don’t have to throw anything away! But you can keep this. 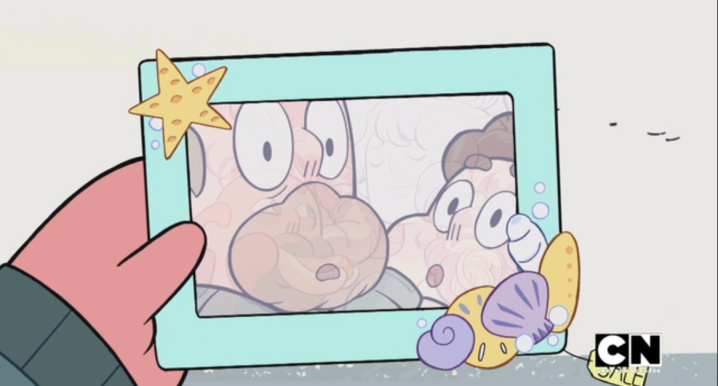 They can’t mend their relationship overnight, but it’s a start, and hopefully the two of them will be able to share a healthier relationship going forward.