This episode features a neat concept taken in increasingly serious directions (but it all ends well). 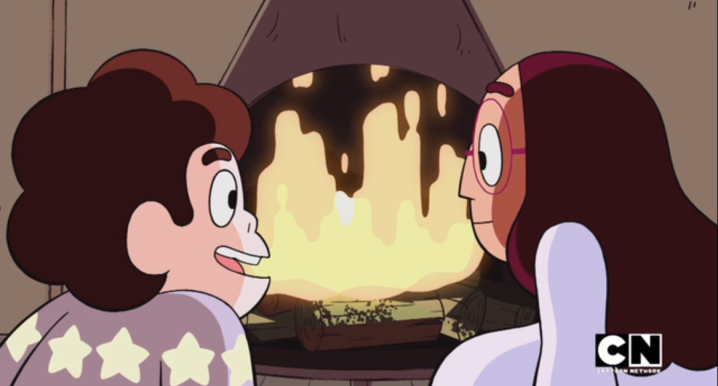 Connie and Steven are hanging out, roasting marshmallows and generally being adorable, when her mom calls to tell her to come home because there’s a winter storm coming through.

Connie: Wouldn’t it be fun if we got snowed in together?

Steven: We could stay up all night and watch the snow fall!

Beach City definitely seems like a place where snow is pretty rare, in which case they probably wouldn’t have the hardware to clear out the roads in a hurry, so I can certainly understand Doctor Maheswaran’s concern.  But it’s up to Steven to actually get them out the door, and of course he’s not too keen on saying goodbye to Connie so soon. 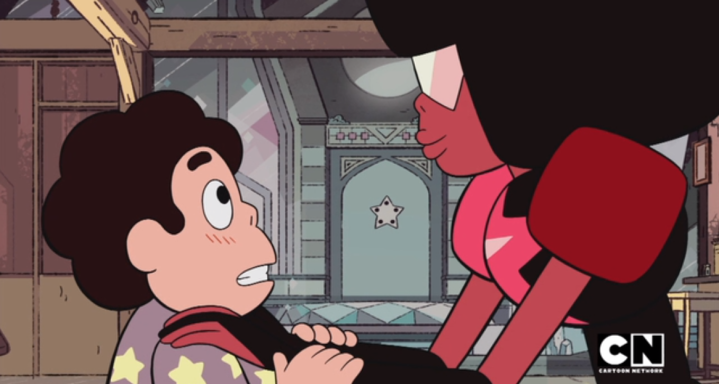 Garnet: I know you don’t want to go, but you have to make the right choice.

But getting them out the door turns out to be only the first obstacle, as all that snow is so very tempting to kids who experience so little of it (and don’t yet know the dangers of icy roads).

Greg: The Maheswarans think I’m a responsible parent, and I’ve got to maintain that image.

Connie: Guess this is it.

Steven: Well, Dad, if you want to look responsible, you should probably change out of that sweatsuit. 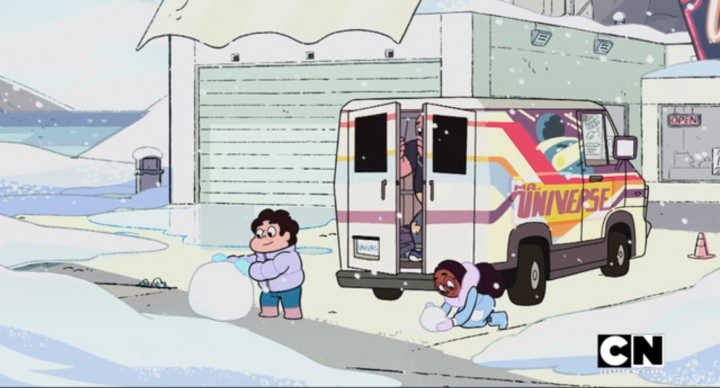 Thus Steven and Connie end up faffing about in the snow for a bit under the guise of helping Greg pick out a responsible-looking outfit.  They honestly don’t do so great in that department, and the “responsibility” thing is further hampered once they hit the road and discover that it’s very slippery.  And they crash into a snowbank, like the snow newbies they are.

Connie: What are we gonna do? 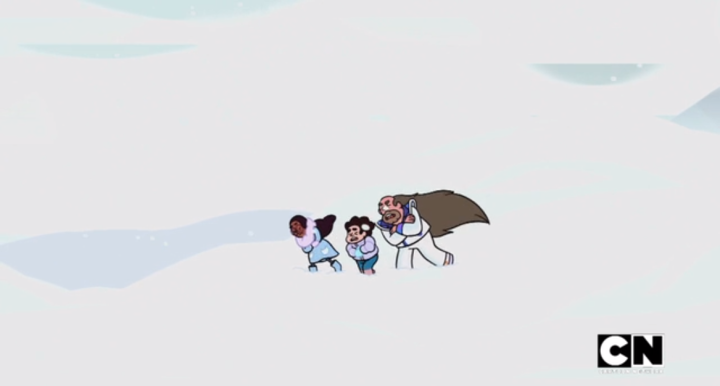 A responsible parent would know that if the roads are too perilous for motor vehicles. it’s probably too perilous for children (and as someone who has often walked places, I have to wonder how they even made it, since walking several miles when you’re not used to it is taxing under the best of circumstances, and snow makes things substantially slower and harder).

When they finally reach the Maheswaran’s, it’s dark, and Connie seems to have gotten a cold…and they’re none too happy to hear that Greg crashed his van and now has to crash at their place.

Greg: So much for being responsible… 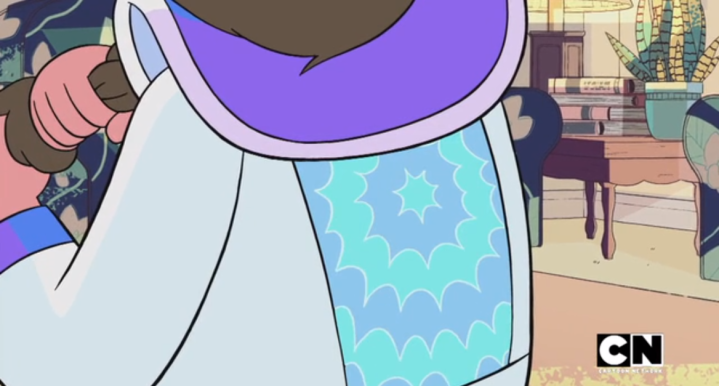 Then this flashy blue thing leads into the main conceit of the episode, as Steven suddenly goes back in time to when they first spun out on the road. 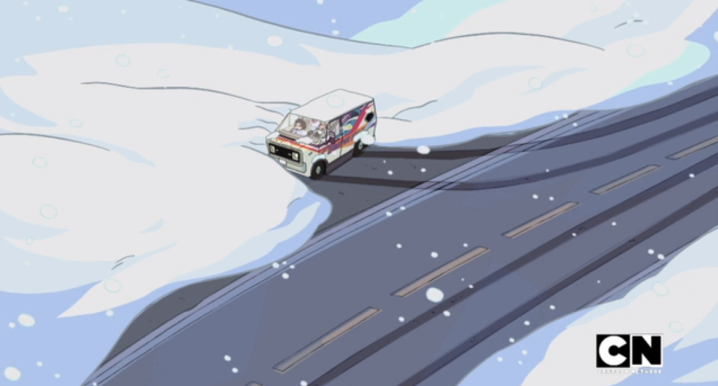 It takes him a moment to readjust (as I expect time travel is rather disorienting), but he quickly grasps his opportunity to change the outcome.

Steven: We should stay put. It’ll be safer this way.

Connie: My parents are all about safety. 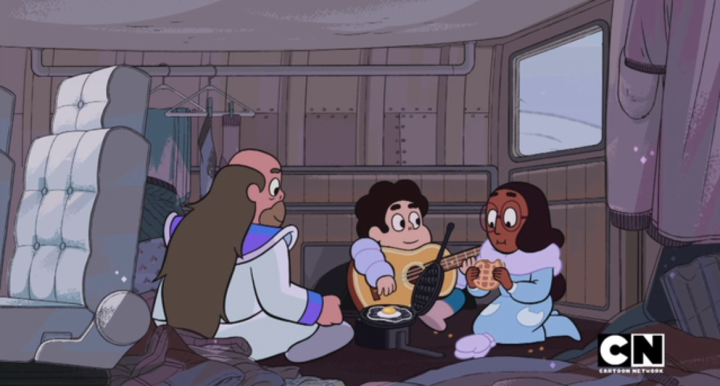 They’re actually rather snug, since Greg lives in there already and thus had all of the necessities on hand.  But unfortunately, they forgot about Connie’s parents (at least Greg and Steven did, I imagine Connie just didn’t want to call and have to explain the situation), so Connie’s dad heads out to pick her up…but he can’t drive in the snow and subsequently crashes into the van. 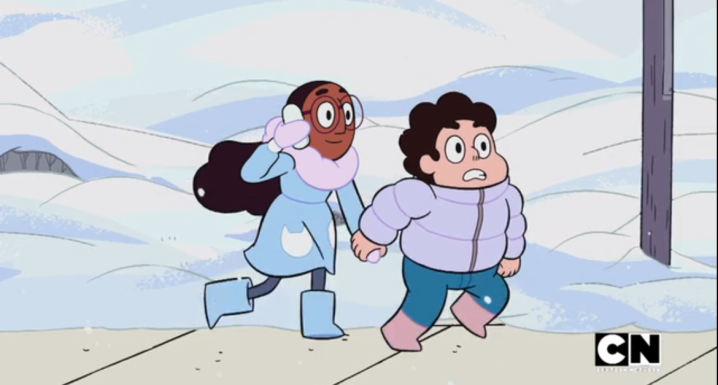 At which point Steven “resets” again, this time to before they set out in the van.  And while my first inclination would’ve been to just get in the van and see how they fare if they don’t stop and have Greg try on all his shirts/play in the snow, Steven decides that the whole trip must be cursed, so he throws away the keys and just takes Connie back to his place (though they do actually bother to call her parents this time).

But it turns out bad things can happen in Beach City, too, as both Steven and Connie should know by now. 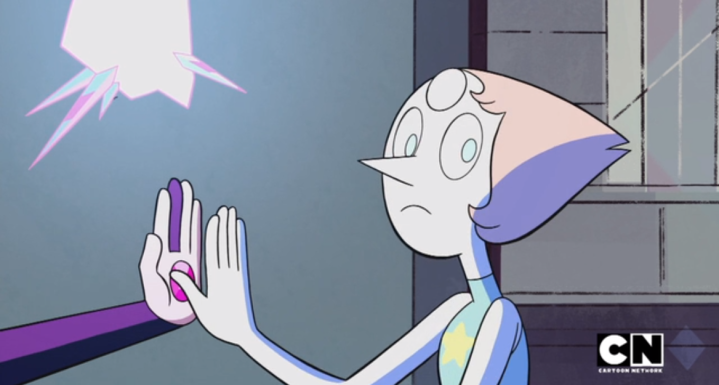 Evidently the other Gems decided to take a big risk while Steven was away, trying to take an extremely volatile explosive and send it to wipe out the Galaxy Warp for good.  Then it explodes.

So what started out as a bad ending only got worse each time Steven tried to “fix” it…but that was kind of the point.

Garnet: I passed my ability to you for a moment.

Steven: You mean, I had future visions?

Garnet: Tell me what you saw.

Garnet: And now you can make the right choice.

So Steven finally just sets his mind on getting Connie home without delay, they manage to drive through before the roads get icy, and arrive at her house without incident.

Doctor Maheswaran: Why don’t you both stay here tonight? 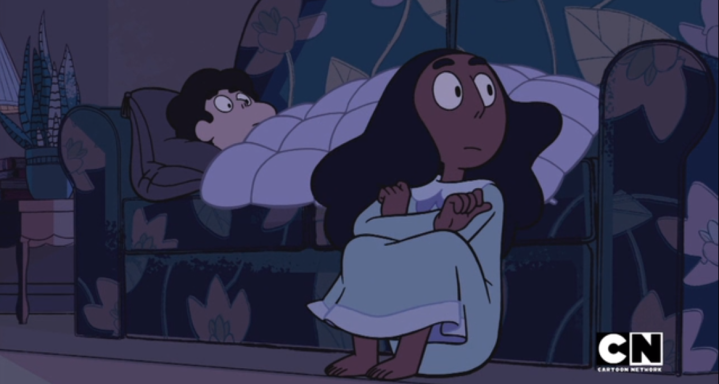 So they finally get the “good ending” when it counts, with everyone safe at Connie’s house and Steven and Connie can watch the snow fall and be adorable.