This episode manages to combine absurdity with just enough sincerity that I can forgive the contrivances that lead to the whole scenario (and the awkwardness which subsequently ensues). 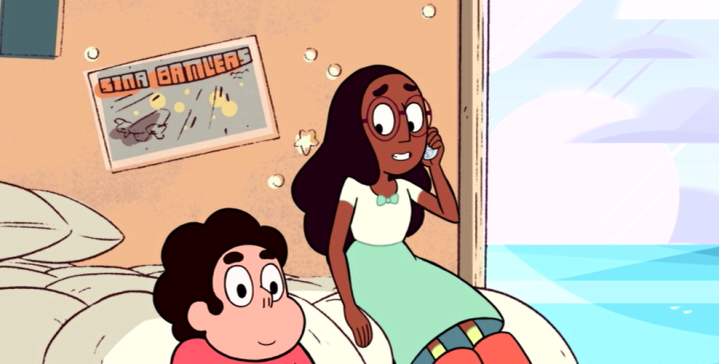 We begin when Connie’s caught in the middle of doing something she shouldn’t be (watching a TV show that her mother had banned), her mom seems to sense something’s amiss on the phone, and then asks to speak with Steven’s mom (because Connie claimed his parents were just in the other room).  Garnet is the only “mom” available.

Garnet: Hello! This is Mom Universe. Yes, the children are playing swords. Sorry, playing with swords. They’re bleeding. Oh no, they are dead. Don’t call again. Sorry, I panicked.

This is even more amusing once you reach certain future episodes, but as it is, Connie’s left with a messy aftermath.

Connie: Steven, my parents are really upset! They say they will not let me see you again until they meet both your parents in person.

Connie: I know, but they want both of our families to go out for dinner.

Steven: That sounds so…adult. I wonder if Fish Stew Pizza will take reservations for…all eight of us!

Connie: You can’t bring everybody!

Connie: Because…because…I told my parents you have a nuclear family.

Steven: Nuclear? Sure, they make stuff blow up sometimes, but that’s because they’re magic, not radioactive!

While it would make things a lot simpler if Connie could just tell her parents that Steven’s mom is dead, she’s led them to believe otherwise for so long at this point that she’s scared of what they’ll do if they find out she’s been lying to them (quite reasonably, as we later discover).  Thus the stage is set for a very awkward dinner, with Connie’s visiting rights at stake. 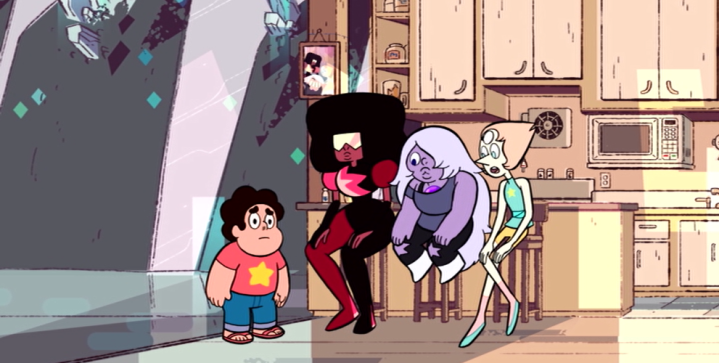 Steven: Man, why did Connie have to say I had one mother instead of zero? Or three?

Greg: We’ll figure this thing out. We just have to put our heads together.

Steven: Why didn’t I think of this before? It’s so obvious! You can all come to dinner – all three of you, fused into one!

All three of them resist at first, but of course once they realize how much it means to Steven they can’t say no.  Thus our first glimpse of the Crystal Gems’ “Ultimate Form”, Alexandrite, is for a dinner party, because they all love Steven that much.

I do not go for cringe humor.  This entire dinner scene, I was just experiencing secondhand embarrassment on Connie’s behalf.

The only problem Alexandrite solves is how to bring everyone to dinner.  It only compounds the individual personality flaws of the Gems into one giant person.

Mr. Maheswaran: What is it that you two do for a living, Mr. and Mrs. Universe?

Greg: Well, you see, I own a local car wash, and my sweet, dear wife here, uh-

Steven: My mom works on an apple farm!

Doctor Maheswaran: What did we say about heads on the table?

That poor, poor girl.  She understandably attempts to draw Steven aside for a private word. 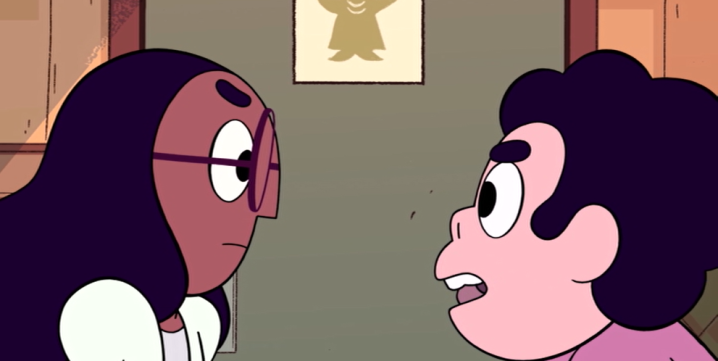 Connie: Steven, are you kidding me? What is that thing you brought to dinner?

Steven: It-it’s my family. It’s all of the Gems, fused together into a six-armed giant woman.

Connie: Why couldn’t you just bring one of the Gems?

Steven: Cause that would be a lie! Your…glasses…

Connie: What about them?

Steven: I healed your eyes! You don’t need to wear those anymore.

Connie: What are you talking about?

Steven: All that stuff you told your parents about my family…you’re just ashamed of me!

I don’t really see why Connie couldn’t at least reassure Steven here (aside from, y’know, contrived tension), but at any rate, it’s obvious that Connie hides quite a bit from her parents, which makes straightening out any lie a bit of an undertaking; she hasn’t even told them about her eyes yet, so she keeps wearing the frames to maintain a facade. 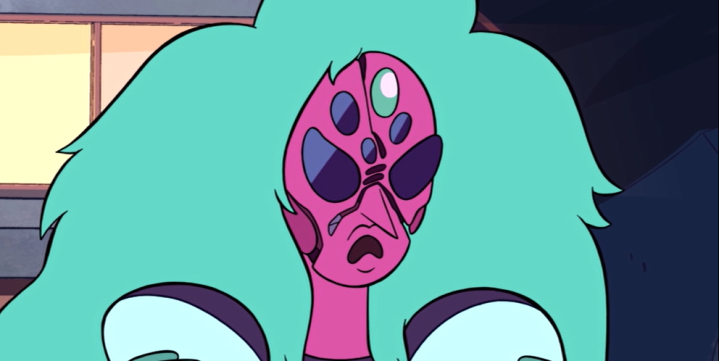 Then Alexandrite’s facade finally cracks.  Turns out a fusion is liable to Gollum-speak when it’s falling apart!

Garnet: It doesn’t matter what you two think. We’re doing this for Steven!

Mr. Maheswaran: What is going on here? Who are they?

Doctor Maheswaran: I knew I should’ve trusted my bad feelings about this new friend of yours, but I never thought I wouldn’t be able to trust my own daughter!

Then Connie runs off, and Steven follows, and neither of them are in a particularly rational frame of mind.

Connie: Steven, I’m so sorry. It’s not that I’m ashamed of you. I was so worried that my parents would think all this magic stuff was weird. What if they don’t let me hang out with you anymore?

Steven: I…I’m sorry I messed everything up. I wish there was a way we could all just hang out without having to worry about stuff.

Connie: Steven. Let’s just hop on a bus and live somewhere else without telling anyone!

Good thing they have a giant six-armed not-mama to stop them from doing stupid things like that!

Pearl: Steven, you are in very big trouble, and we have no choice but to punish you.

Garnet: No dinner for one thousand years!

Pearl: We would never starve you. But you will lose your TV privileges. For one thousand years.

They certainly know how to hand out punishments.  And apparently that’s what earns the respect of Connie’s parents.

Doctor Maheswaran: I did not know what to make of the two of- excuse me, the four of you. But I see that you are responsible parents…caregivers? Guardians?

Connie: So I can still hang out with Steven?

These two will never not be adorable.