The most interesting aspect of this episode is the philosophical thesis it posits…with which I disagree.

Ronaldo: Some might say it’s coincidence. I say there’s something more.

Ronaldo: You’d already be in the know if you followed my blog, Keep Beach City Weird! I document all the weird things that happen in Beach City! You can’t always trust facts in books. I’m out here hunting the truth!

I mean, he’s right that there’s something “supernatural” going on…the only weird thing is that he never connected it to the people in the neighborhood whom everyone knows to be “magical”. 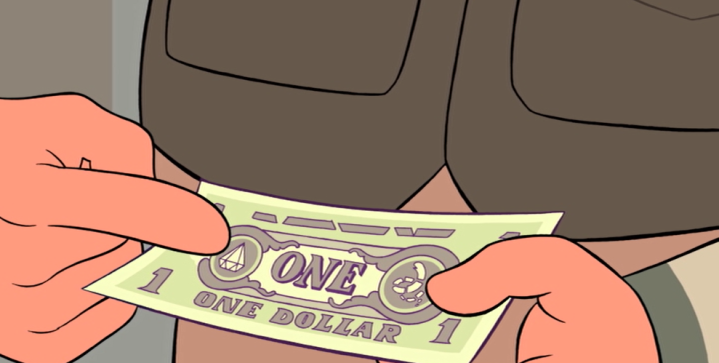 Ronaldo: Snake People, or Sneople, control our government at the highest level. Look! The snake represents their hold on our country! The diamond represents their underground mine! Or, their sharp teeth! The details aren’t important! They pit us mammals against each other with elections, sports, and anime message boards! We spend so much time fighting over dubs or subs, that we miss the big picture!

Okay, that last one was funny.

Of course it’s just another Illuminati conspiracy theory, but Steven takes it all at face value and promptly becomes terrified of snakes…until Pearl points out that all the “paranormal activity” Ronaldo’s fixated on resulted from various antics of the Crystal Gems.

Steven: Is all the weird stuff that happens in Beach City because of us? 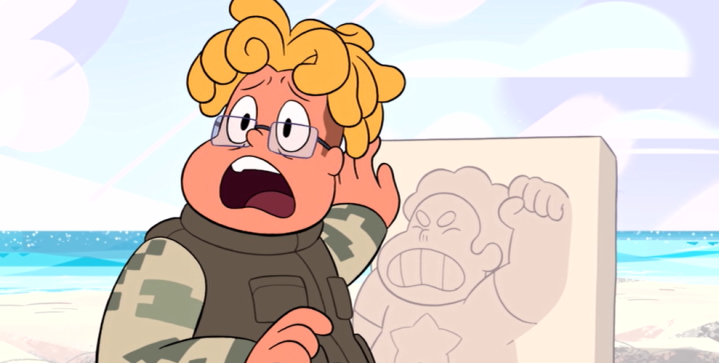 Steven: Maybe the truth just isn’t what you thought it was.

Ronaldo: Sure it is! Don’t get so hung up on these minor facts! Truth is about more than that! Truth is a feeling in your gut that you know is true! Truth is searching for anything that proves you’re right no matter how small and holding onto that, no matter what.

Steven: That kinda sounds like the opposite of truth.

This whole thing about ignoring “minor facts” feels a lot harsher after 2016…and honestly, the conspiracy theorist archetype in general feels a lot less harmless in this day and age.

Pearl: Oh, Steven. Humans just live short, boring, insignificant lives, so they make up stories to feel like they’re a part of something bigger. They want to blame all the world’s problems on some single enemy they can fight, instead of a complex network of interrelated forces beyond anyone’s control.

So, this is literally what you call nihilism.  The show frames Pearl as correct in her assessment of humanity and the universe in general, and later episodes back it up further.  The show clearly espouses this philosophy…and I do not.  I do, however, agree with the observation that people tend to look for a narrative framework to give their lives meaning, even if that search can sometimes lead to harmful false equivalences.  In my view, the genuine search for meaning (objective truth) will always lead to good, no matter how small or insignificant it might seem.

This also brings to light how religion is essentially nonexistent in the Universe of Steven.  And I can’t help but be frustrated that my point of view is represented by Ronaldo; it’s just condescending.  There will always be people who refuse to acknowledge truth that forces them to change the way they see the world (and especially if it would change the way they interact with the world), and they’re not unique to any given religion (or lack thereof).  It’s just human nature: You’d rather not consider that you may be wrong in your fundamental assumptions about the universe.

Anyhow, Steven is sad to see Ronaldo give up on his blog and conspiracy theorizing.

Steven: I’m gonna go fix Ronaldo! I’ll be back in an hour. 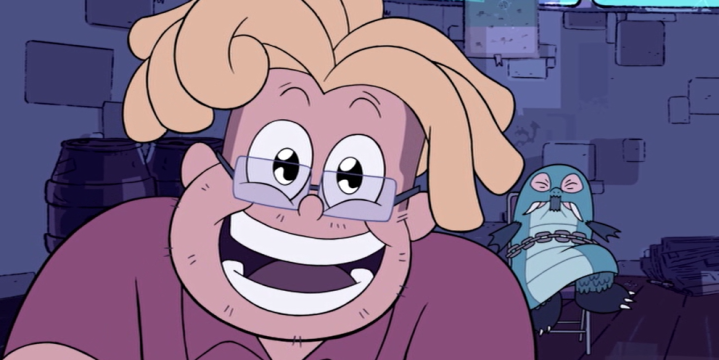 It takes a bit more than an hour.

Steven: I just wanted to inspire Ronaldo to be weird again.

Ronaldo: No! It just isn’t that simple! There’s got to be more to it than just…you.

Peedee: But there is more! Steven is just a small piece of the puzzle. Look at this! I think it’s gotta be, uh, Level 8 beings pulling the strings!

Ronaldo: Get real, Peedee. Level 8 beings are a worker society incapable of such organization…woah. Wait a minute! How did I never see this before? I know what the diamond means. Polymorphic sentient rocks!

So the rest of them are happy to leave Ronaldo to his delusions…except after that breakthrough, he’s somehow right about everything.  The Gems are literally “polymorphic sentient rocks”.  He’s basically Autor from Princess Tutu (complete with figuring out the true nature of his world), but less helpful and less interesting.