Pearl’s peculiar relationship with Greg comes into focus as Steven tries to cheer her up with a spaceship. 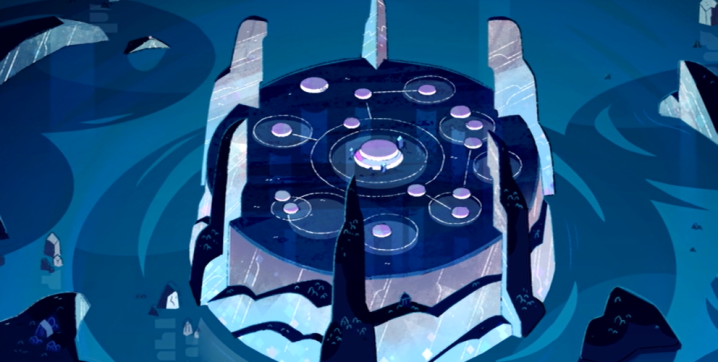 We begin with a glimpse of the Galaxy Warp, which was once the central hub for interplanetary warp pads on Earth – evidently Garnet decided to double check that they were still inactive after Lapis Lazuli managed to leave the planet.

Pearl: The Galaxy Warps have all been inactive for thousands of years.

Steven: Can we fix them?

Pearl: It’s fine. I’ll always have my memories of other worlds. But now I’m here. On Earth. Forever.

Pearl: Right. With you. It really is incredible out there, though. I wish you could see it, Steven.

That is the face of someone with serious cabin fever (planet fever?), and Steven naturally picks up on her discontent.

Steven: Hey Dad! Did you know the Gems used to travel all over outer space? […] I think Pearl really misses going out there. Dad! Can you help me build a spaceship?

Of course Greg and Steven don’t build anything capable of ordinary flight (it doesn’t even make it down the hill in one piece), but, you know, normally it’s the thought that counts with these sorts of things.

Pearl: I think your calculations may have been off.

Greg: Well they can’t be off if you don’t do any.

Unfortunately, Pearl latches on to the idea a little too hard.

Pearl: I don’t know why I never even thought of this before! This could actually work!

Pearl: I hear what you’re saying, and I agree. It would be incredibly dangerous, a fool’s errand! […] But aren’t the true fools the ones who don’t seize an opportunity despite all the inherent risks? And I’d be able to show Steven the wonders of the cosmos! And maybe just for a second, from a distance, I could see what’s been going on without me.

It’s hard not to want her to succeed – Pearl’s never shown this much passion about anything before.  For once, she’s not just using “make Steven happy” as an excuse to do what she wants – she legitimately wants to share this thing she loves with him.  But that doesn’t mean she can just ignore everyone but Steven. 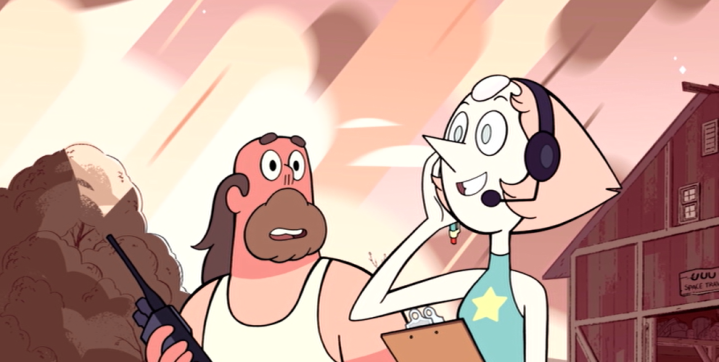 This is the first time we really see Pearl and Greg interacting, and the way she blatantly ignores his wishes (as well as legitimate concerns about Steven’s welfare) occasionally has a whiff of some sort of bitter ex.

Greg: You really are serious!

Pearl: Of course. We’re also going to need a spacesuit for Steven so he doesn’t freeze or explode.

Greg: Woah, you are not taking him to space.

Greg: No no! I mean, you’re grounded. You don’t get to leave Earth! […] As CEO and Supreme Space Commander, I hereby ground this astronaut and cancel this mission.

He hadn’t thought they were serious about going to space, so once he discovered that Pearl is dead set on it, especially with the serious technical issues they’re facing, Greg just pulls out the parental veto.  Which Pearl subsequently ignores.

Of course Steven doesn’t know better than to trust Pearl when she whips up a spacecraft and invites him for an “engine check”.

Greg: Where do you two think you’re going?

Steven: Hey Dad! Guess where I am?

Greg: I know where you are – it’s where you’re going that concerns me!

Pearl: This’ll be perfectly fine. Just a pop over to the nearest star system! I’ll give him back in fifty years.

That’s what you call kidnapping, Pearl.

But trouble arises much sooner than that, as the ramshackle ship begins to fall apart.

Steven: We need to go, Pearl, we’re not gonna make it!

Pearl: But we’re almost there!

Steven: Pearl! I know you miss space, and I know you worked hard, but sometimes, you just gotta know when to bail.

Pearl: I’m so sorry. I almost got us killed!

Steven: I’m used to it. I’m sorry I couldn’t help you go to space. We’ll get there someday, I promise.

Pearl: Y’know, I think I’d rather be here on Earth.

Pearl: Yeah. With you.