This is an episode I like much better in concept than in execution. 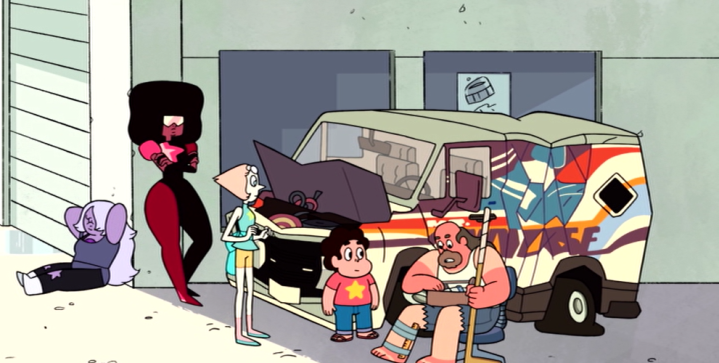 I appreciate the thought behind this episode, as it represents the same idea as “The Houses of Healing” in Lord of the Rings: Fixing things after the battle’s over.  Like LOTR, this show keeps going afterwards to show how different people can be affected by events like that, and it totally makes sense with Steven as the protagonist!

Steven: I’m sorry you hurt your leg and your van got all smashed up because of me.

Greg: You apologize too much. Maybe I shouldn’t have tagged along on that crazy adventure, but at least I got to spend some time with my fave guy.

Then the Gems remind Steven about his healing powers, so he tries it out on his dad…and apparently fails.

Steven: But I was doing so well before…

Pearl: Steven, don’t worry about it. Your powers are a bit fickle, after all.

Garnet: Just give it a bit more time.

Greg: Cheer up, Steven. At least now we get to spend more time together, right? 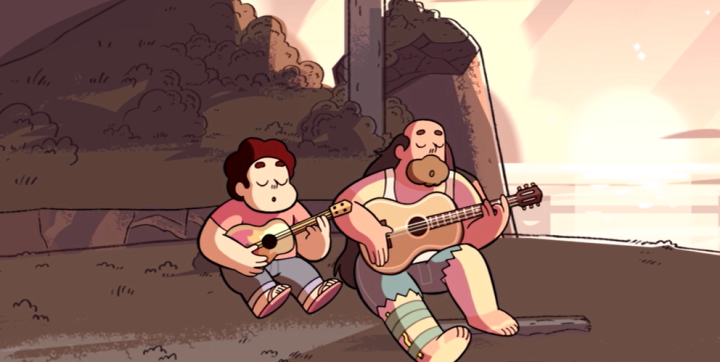 Greg comes to stay with them for a bit (despite Pearl’s protestations), and he has a cute little duet with Steven as they spend some quality time together for the first time in a while. Amethyst seems to enjoy his company, too, but Garnet sticks to her “perceiving what needs to be done” thing while Pearl sets out to fix up Greg’s van, mostly as an exercise in understanding human technology (and maybe partly to avoid Greg, too).

Then one day, Garnet announces a mission and specifically requests Steven’s presence.

Greg: It’s okay, Steven. I’ll be fine. You go on your mission.

Steven: Are you sure?

Steven: Thanks Dad! We’ll be back before you know it!

Greg: Okay, don’t worry about your old man. My leg’s not getting any more broken. If I need something I’ll just…crawl. My arms are still…not broken.

This is another episode from Lamar Abrams, and it made me realize that he tends to use passive-aggressive dialogue a lot more than I like.  Although I admit I might just be more sensitive to it because I’m prone to passive-aggressive behaviors myself.

Anyhow, Pearl lends Greg a “warp whistle” to use if he needs to call for help, then they head out.

Steven: Was there an explosion or something?

I think my enjoyment of Abrams’ episodes tend to be correlated with the general quality of the visuals.  Like, I loved “Lars and the Cool Kids”, but this episode doesn’t have any interesting visual ideas; that geode is basically the only new design, and while it’s sufficiently cool-looking, it’s not very original – I could easily see it in dozens of other shows.

Anyhow, Greg uses the warp whistle to ask Steven about the TV remote.

Steven: It was a very important question.

Pearl: Okay, so if the geode breaks, the storm will be unleashed and our bodies will be vaporized!

Steven: Then we’d be dead.

Garnet: That’s where you come in.

They want to see if Steven can use his healing powers to fix the crack in the geode…and he fails. Again.

Steven: How am I supposed to call myself a Crystal Gem when I can’t even…

Poor Steven is back to feeling powerless again, but of course it’s worse now that he’s actually been able to control them before.

Then he surprises his dad walking around on his supposedly broken leg. 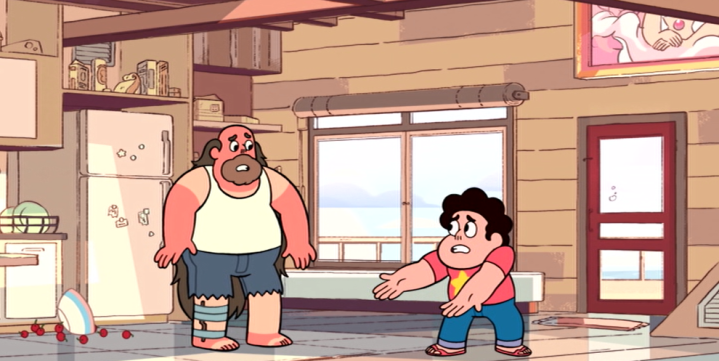 Steven: Just stop, Dad. I get what’s going on. Your leg’s not broken at all, is it?

Greg: It was broken, but you healed it back at the car wash.

Steven: You lied to me! Now I can’t do it anymore! […] The Gems wanted me to fix a broken rock, but my powers aren’t working! It’s because of you! You messed with my head!

Greg: No! I didn’t mean for- I just wanted to live with my son again!

And this leads to the other thing I dislike about Abrams: He always takes relatively simple problems and has the characters choose the worst possible solution.  Like, aside from the fact that Greg was lying to his son, he had a pretty good excuse to stay with him anyway considering that he lives in the van and that’s unlivable at the moment. The only thing that the broken foot got him was Steven doing everything for him, which is a pretty lousy thing to do if you’re not actually injured.  And also inadvertently ruining Steven’s confidence.

Steven being Steven, it doesn’t take long for him to regret their argument, but Greg has already decided to take matters into his own hands and fix his mistake by warping to the geode himself.

Greg: I’m responsible for this!

Greg: But I messed up your powers! I did everything I’m not supposed to do, and now you can’t heal!

He talks Steven into trying again, only for him to fail again, so he reaches for the handyman’s secret weapon. 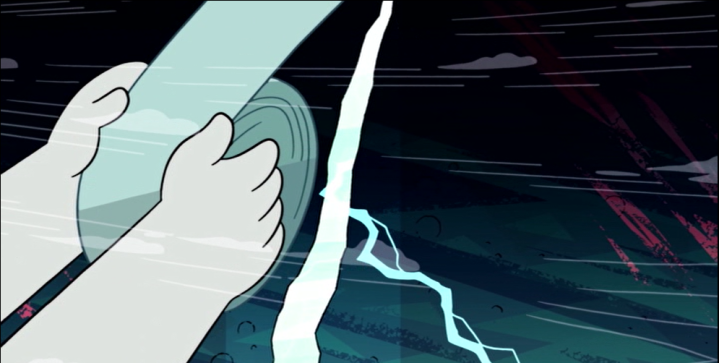 Greg: There, see? Almost as good as new.

Because duct tape fixes everything!