You’re such a nice boy, Steven. Why do you hang out with those animals? 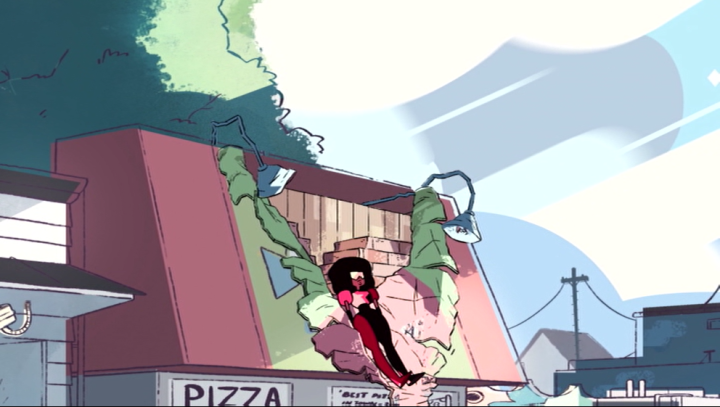 While I hate to pick on writers/artists, this episode made me realize that I’m not fond of Lamar Abrams’ style.  I have liked some of the episodes he’s worked on (the opening credits for each episode list the writer and storyboard artists, so I’m guessing that means the “story people”), but this and “Onion Trade” list only Abrams, and I wasn’t fond of either.  There’s more of a cynical edge to these episodes that’s just not what I come to Steven Universe for.

That said, I did like this one better than “Onion Trade”, if only because the townsfolk who take the spotlight this episode are more interesting and/or likable than Onion.

Said townsfolk being the Pizza clan, owners/operators of Fish Stew Pizza: Kofi, Kiki, Jenny, and Nanefua (aka best grandma). Kofi gets (understandably) mad at the Crystal Gems when his sign/roof becomes collateral damage in the latest monster battle and they don’t even offer an apology, let alone any practical help.  So it’s quite understandable when he chooses to ban the Crystal Gems from said establishment.

Steven: I’ve got bad news, everyone. You’ve all been banned from Fish Stew Pizza.

The Crystal Gems, in turn, don’t really care that they’re banned – Amethyst is the only one who eats regularly, and evidently it’s not her favorite joint. So the only one who cares at all is Steven.

Steven: What’s the point of saving people if they’re just gonna ban you from their pizza shops?

Garnet: We don’t do it for thanks.

Steven: Yeah, see? That’s so nice of you! The Pizzas don’t even know! If they got to spend some time with you, they’d see how fun, and smart, and mysterious you are!

I get that Steven just wants his friends from town and his magical friends to get along, but throwing a party is honestly a terrible way to try to get two parties to reconcile, let alone “get to know each other”.  A better idea might be to, I don’t know…actually help rebuild the shop?  I mean, the Gems are allegedly busy “saving the world”, but if they have time for a party they have time for some community service.

At least we get to see them in their “summer chic”. 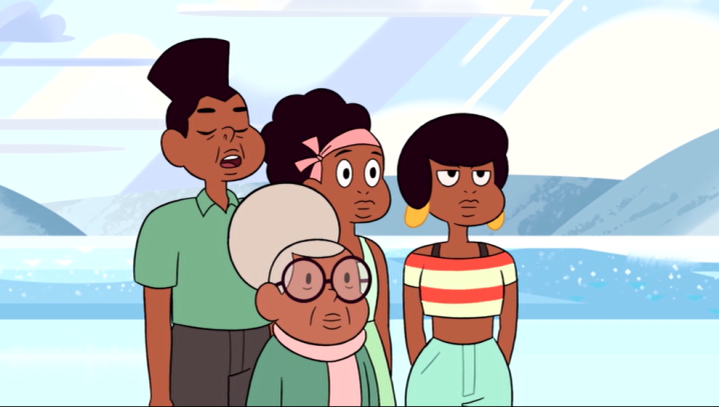 Steven: How are you all doing today?

Kofi: The shop is closed today because it’s broken.

Nanefua: Hey, do I smell hot dogs? Show me where the hot dogs are!

I love how Nanefua is the only one in this group who seems to know what “tact” is.  But it turns out a cookout with two people who don’t eat is a little awkward (evidently Amethyst eats for the same reason that she sleeps – “it feels good”).  So Steven turns to volleyball, pairing up the Gems with the Pizzas in an attempt to foster camaraderie. 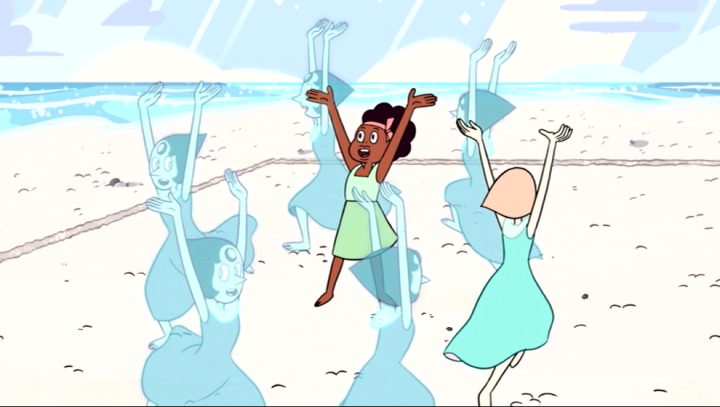 It works a little too well.

Jenny (the “cool” one) ends up with Amethyst, and their mutual disregard for the rules leads them to cheat, and Pearl isn’t much better when she’s competing against Amethyst.

Fortunately, that monster comes around for round 2, forcing them all to work together under Nanfua’s expert management.

Steven: This is terrible. I was trying to get everyone together, but now everyone’s in danger!

Nanefua: I’m not afraid of that thing. Let’s see if you can keep up with me!

Thus they defeat the monster and Kofi reneges on the pizza ban because…he sees how dangerous/important the Gems’ work is, I guess?  I mean, it’s nice that they’ve come to an understanding and all, but their shop still needs to be fixed and the Gems have shown no inclination to help with it.  Kofi was a passive-aggressive jerk about it, but he still had a legitimate complaint that was never addressed.