This could be the Teacups all over again! 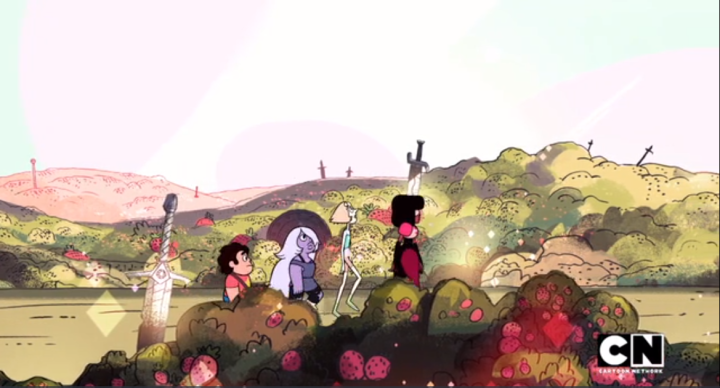 I haven’t really talked about the worldbuilding in this series yet, so allow me to say: This show has fantastic worldbuilding.

Pearl: Unbelievable! This was once a Gem battlefield – now it’s wild strawberries as far as the eye can see! Oh, that’s what I love about the Earth!

The structure of the plotting/worldbuilding reminds me most of Harry Potter (one of the things I genuinely like about that series), but much less expositional (at least in the early going).

Of course, one huge benefit that Steven Universe has over Harry Potter is the visual element – they can (and often do) throw in details in the background that either become relevant later or simply add texture to the world, all without calling much attention to it.  I imagine that’s part of why this show got to be so popular.

Anyhow, this is a Mission Episode. 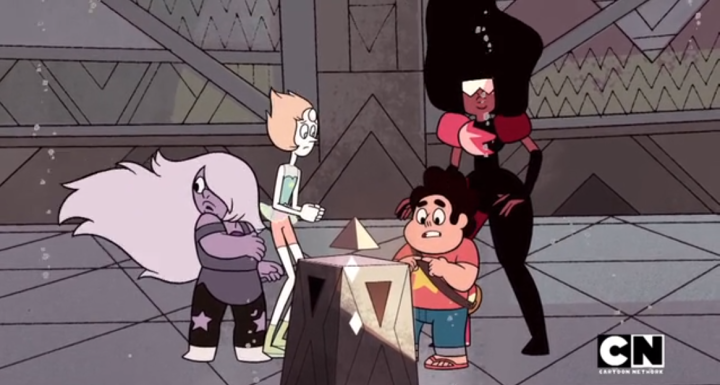 Pearl: Steven! What have we told you about touching magical things?

Steven: Definitely always…never do it.

This episode focuses more on Garnet, as she seems determined to give Steven a chance to help out despite Pearl’s protestations – perhaps partly because of the way Steven’s gotten himself out of trouble himself the past few episodes, but also to cheer him up/boost his confidence after an unfortunate incident on a teacup ride more recently.

Pearl: Nope, no no no! You two are a disaster waiting to happen.

Garnet: Steven goes with me.

Garnet: But remember, this is a serious mission.

What do you mean waiting to happen, Pearl? Amethyst and Steven have already proven to be a disastrous combo, and if you missed it that’s on you.

So Garnet and Steven run around the mysterious temple for a bit, by which I mean they enter three different deathtrap rooms, or at least rooms that would definitely kill Steven without the aid of his big red magical guardian.  Then they find themselves back where they started, and Steven is feeling sick.

Then we finally hear what happened with the Teacups – Steven got nauseous on a teacup ride and decided to jump off, inadvertently wrecking a good portion of the amusement park in the process (but no one gets seriously hurt, because of course not).

Steven: What do we do?

Garnet subsequently punches the floor out, revealing the offending gem. 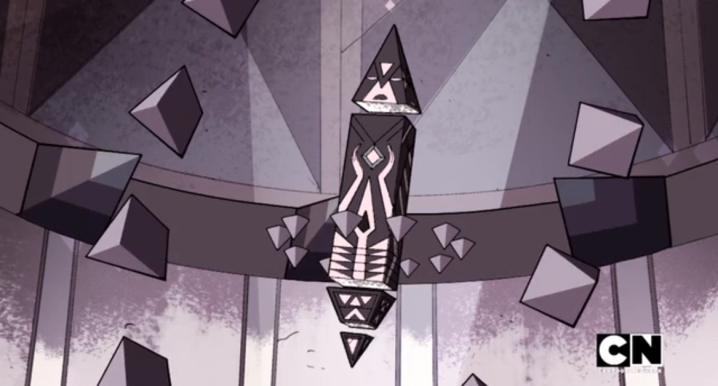 Even if Steven seemed like a burden early on, if he hadn’t come along, they never would’ve accomplished their mission – touching the magic thingy was necessary to reach the floor Garnet smashed to reach this, and without Steven around to get sick they might never have realized what was going on with the rooms.

And then he somehow pries out the gem himself!

This was another video game-esque episode (not all the mission episodes are like that, though), this time feeling more like a platformer than a puzzle game, but still with some great backgrounds.

Beneath those cool shades, Garnet is also a sweetheart.

And then Steven improvises a little ditty on his ukulele (because of course he has a ukulele).

Oh, that’s the end of another day

It was mighty serious I have to say

When they made the temple explode!