We finally learn the truth behind the myth of the Zodiac.

Long, long ago, there lived a certain person in a certain place. This person had been all alone for many, many years. […] This person had lived a thousand lifetimes and possessed a thousand different powers. Their memories stretched back through millennia. They knew they were not like the humans at all. This person came to fear the humans. Feared getting hurt. Despite having so many powers, they feared these scores of human beings who were so unlike them.

I’m not a fan of using “they” as a singular pronoun, but I guess that’s just an issue with the English language for lacking gender-neutral pronouns, and this does seem to be a fairly gender-neutral person.

But then, one day, a cat came to visit. The person was puzzled by the sudden visitor. The cat bowed its head respectfully and said, “I have been watching you for quite some time. You are a strange and mysterious being. I cannot help but be drawn to you. Though I am but a stray cat, please let me stay by your side. Please, ‘God.'”

And so, the cat was as good as its word. It never left its god’s side. Not even for a moment. This made the god very, very happy.

So the Cat was really “God’s” first friend – and because of that first friendship, the god thought to invite more animals to a banquet…

And so it came to pass that twelve animals went to see the god. After that occasion, the thirteen animals and the god would have a feast every night the moon shone bright. They sang, danced, and laughed. For the first time, the god was boisterous and laughed in merriment. The moon quietly watched over these parties that were hosted by the divine and attended by beasts.

But just because the animals reverenced the god didn’t mean there would be no pain.  The easier it is to love, the harder it is to lose. And one night, the cat collapsed.

All the animals cried. It made them realize that all living things were destined to die. The banquets would end. No matter how enjoyable they were, no matter how beautiful or precious, it wouldn’t last forever. The god recited a single spell and drew a circle in a sake cup. The god had the fallen cat take one lick of it, then turned to the rest. “We have a bond, and I shall make it eternal. Even when we die and rot away, the bond will still connect us together. No matter how many times we die and are reborn, just like this night, just like so many nights before, let us continue to hold our banquets. We shall remain friends, now and forevermore. Nothing will ever change for us.”

And starting with Rat, they all drank and joined the bond.  But the Cat protested.

“My god, why did you make me drink? My god, I have no desire to be eternal. I do not wish to never change.”

Those words were unexpected, to say the least. For the god and the other assembled animals, they were words of rejection.

“My god, even if it is a frightening prospect, let us accept that all things come to an end. Sad though it may be, let us accept that all lives are impermanent. My god, though it was only for a short time, I was happy at your side. If indeed both of us die and are reborn and meet again, I hope that it is not on a moonlit night. I wish to see you smiling in the light of day. Not just among us animals, but among the humans as well. That is my dearest wish.” With that, the cat flicked its tail one last time and died. But the others had already stopped paying attention. They had already made up their minds that the cat had betrayed them.

And that’s why they all called the Cat a fool – they didn’t want to hear his wisdom.

And at last, the day came when the god too left this world. However, the god was not afraid because of the promise they had all made so many years ago. “Let us hold our banquet again. Again, again and again for eternity, unchanging. I may be lonely and all alone right now, but everyone is waiting for me on the other side of that promise.”

Now it’s nothing but an ancient tale. Everyone has forgotten that first memory, that first promise…

Yuki: Sorry for the sudden tears…I just said goodbye to someone I’ve been with my whole life. We were together…we were together all that time, but it was really tough. It was a heavy burden. And yet, now that we’re finally apart…I don’t think it’s fair for me to cry about it now.

Yuki: Sorry…I bet I’m not making a bit of sense. This isn’t exactly what I’d planned to tell you. But for now, I’m not complaining.

Then Machi asks if she can call him by his first name and it’s too precious. 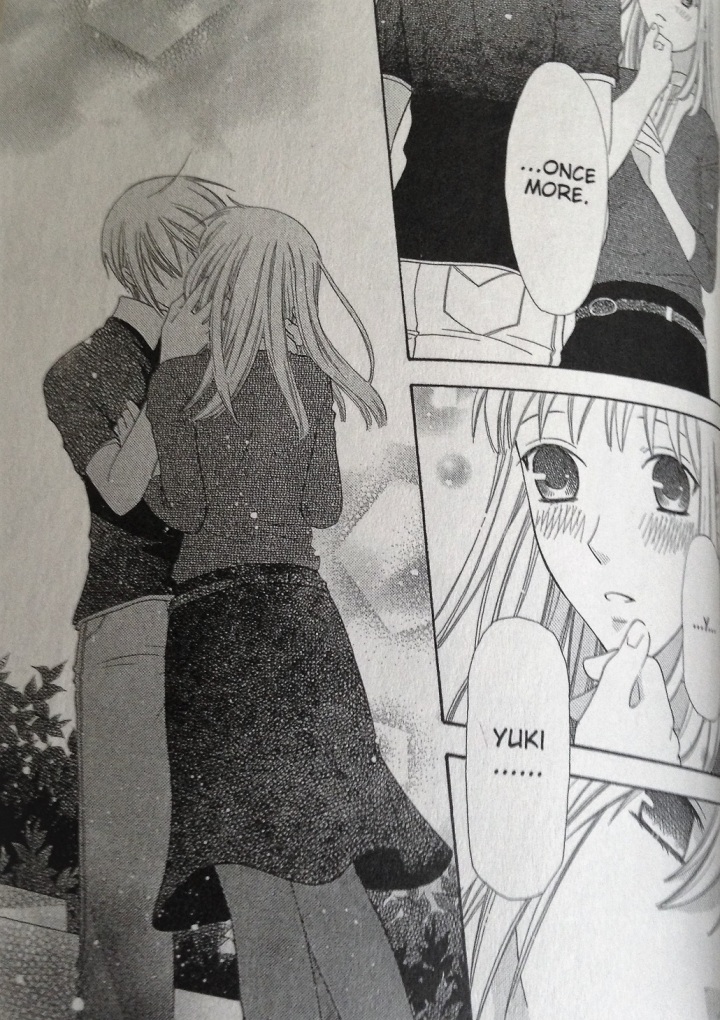 When did that first promise turn into a “curse”? When did it become a “burden”? Days filled with happiness…happy days that we never wanted to end…those days were full of love…but time passed, and people changed, until only suffering was left. I’m sorry. I’m so sorry. But the most important thing I want to tell all of you, you who have borne this threadbare promise, this promise that has lost its original form, for so long, is thank you.

The “memory,” much like the bond itself, was bent and warped over time, infected by prejudice and resentment.

The story from long, long ago, the first memory, forgotten by everyone…the Cat’s wish wasn’t granted until much, much later.