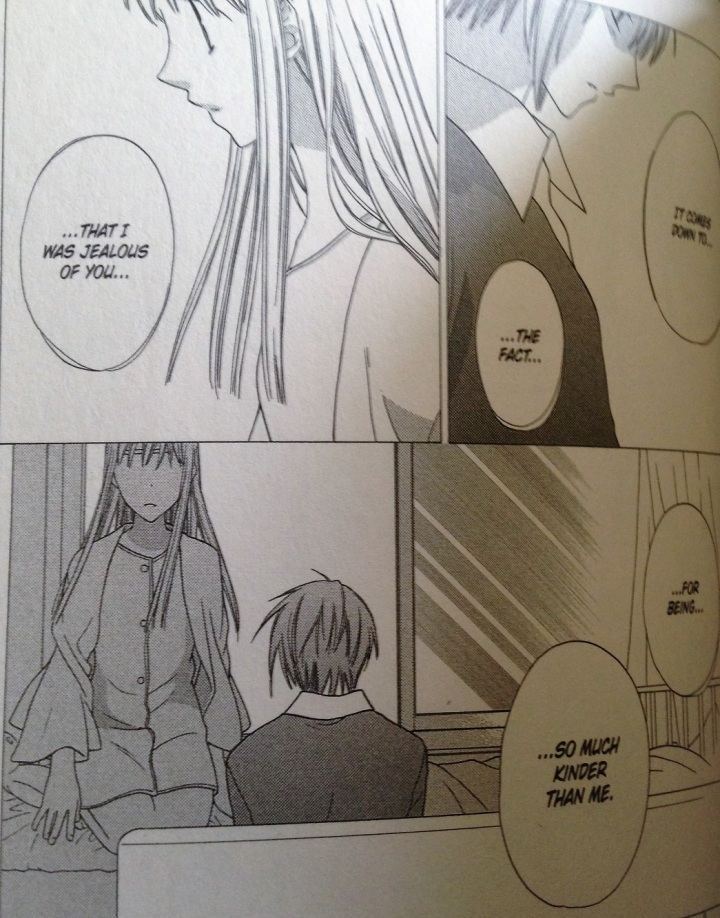 Akito: It comes down to the fact that I was jealous of you for being so much kinder than me.

Tohru: I…I’m not “kinder”…please. Don’t separate us with words like “kinder.” Don’t decide that I’m one way and you’re another. It only puts distance between us…besides, Akito-san, you may think I’m kinder, but so are you. You cried because you were lonely and scared. You were painfully innocent and kind. But there I was, trying to destroy the world that you wished for. It doesn’t matter whether you were wrong or making a mistake. That doesn’t change the fact that I really hurt you, Akito-san.

There’s obviously some sort of translation error here (not that I blame them – this certainly seems like a tricky passage to translate), but I think this is meant to be a callback to Tohru’s conversation with Yuki about how different people have different forms of kindness.  Perhaps Akito’s kindness has to do with her love (because no matter its origin or the way it was twisted, Akito does truly love the Members of the Zodiac)…but I still feel like Tohru lets her off way too easy.  It’s in-character for Tohru to forgive easily, sure, and Akito definitely needs a friend like her, but Akito still wounded a lot of people, and she’ll have to take responsibility for her actions, not only for the sake of her victims, but so that she can start to grow and change herself.

Initially, I wanted to describe the breaking of the Curse as “eucatastrophe”, but it’s really not.  It is neither sudden nor completely joyous. This isn’t a classic “faerie story” with clear stakes set in black and white – it’s an exploration of the kind of gray areas you’re more likely to see in “the real world”, just accentuated with a dash of magic and a few classic fairy-tale tropes.  The breaking of the Curse was gradual at first, but we knew it was coming from the start, because that’s what happens in fairy tales. This whole volume presents a sort of slow turning, like the dawn at the end of a long night. Now, the sun has finally risen above the horizon. 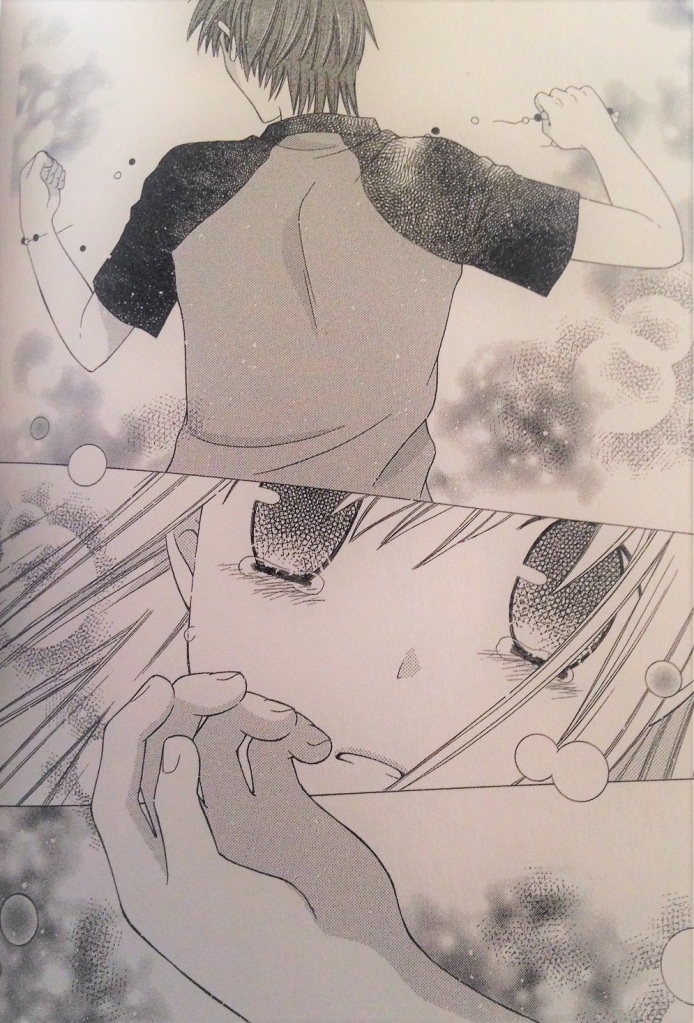 It’s been long enough, hasn’t it…? Father, I don’t want to be “special” or a “God” anymore. Is it okay for me to be just myself…? Even if I start living my own life, I…”I” will be miserable, and afraid, and unneeded…but still…farewell. 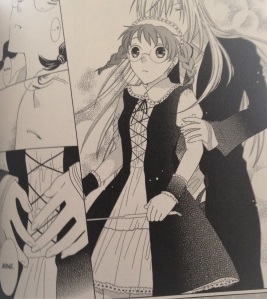 Ayame: Mine. I was born to love you. At long last, I can tell you that…

Aaya is just precious.  I wish those two the best now that they can be an official couple.

Then Ritsu is released, and Kisa, then Kagura…

Farewell, everyone. It’s sad to say goodbye. It’s so sad…”Farewells are always followed by new meetings.” “There can be no beginnings without endings.” Cliched phrases like that can wait…I don’t want to hear them right now. So please just cry with me. If there’s nothing to be done, at least cry with me for now. Cry like your entire body is screaming. Cry like you’re damning everything. Something’s been lost, and now we’re living life with no guarantees.

Shigure: I see…so this is what it feels like.

Hatori and Shigure are last but one…

There’s just one fragment of hope born from the fear of living in this world once again. So I want you to at least cry. Cry with me. Cry like the first day you were born into this world. 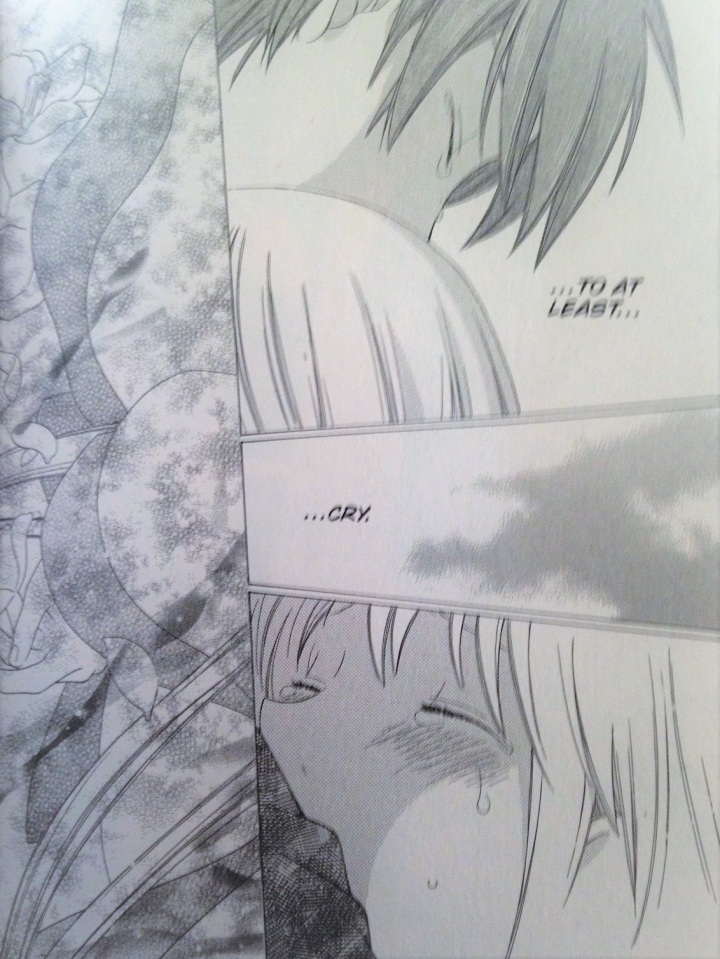 Tohru: Akito-san, I’d like it if we could be friends. That’s my wish. I’d like to be your friend.

She taught me it wasn’t too late to believe in “fateful encounters” and “new beginnings.”

You’re the last one, then. Our promise from long, long ago…you kept it to the end. Thank you.

Just for the record, I think the final Members of the Zodiac were released largely in order of Akito’s personal fondness, perhaps with a little influence from their attachment to others – she was least fond of Ayame and Ritsu, closest to Hatori and Shigure…and Yuki? It actually does make sense that she would’ve felt close to him, even if the sentiment was largely one-sided.  They did grow up together, after all.