Akito seems to have made a decision after Hiro finally comes around and they have their little chat. 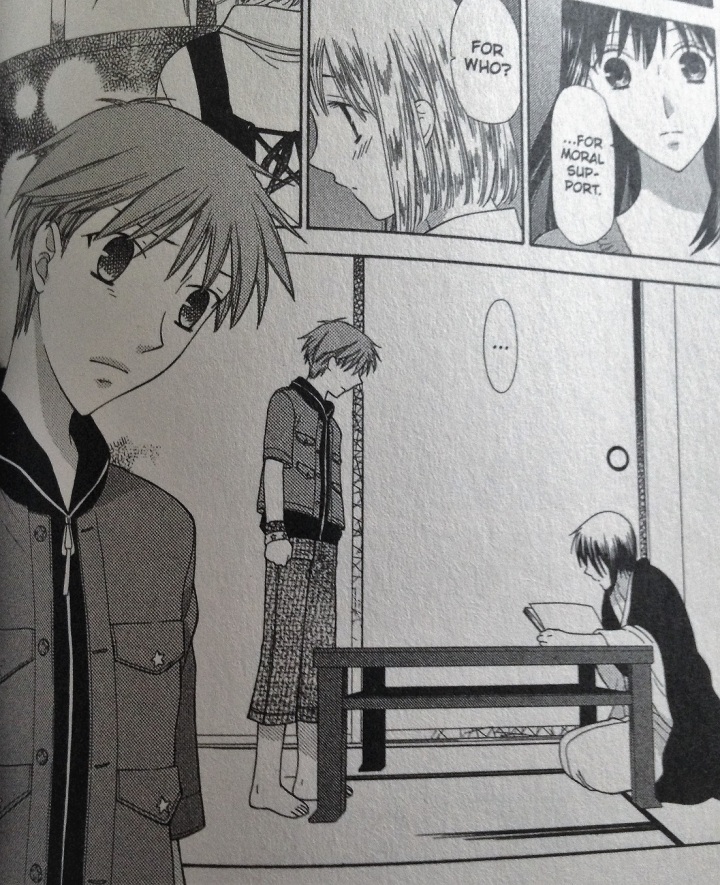 Akito: Hiro, as always, you’re naive and stupid. Even though you’re not particularly strong or smart, you stubbornly cling to your desires…to be honest, that side of you has always been something I admire.

Seeing them starting a more normal (if awkward) relationship finally made me realize why Hiro would have told Akito about his love for Kisa way back at the start.  Each of them has a “special” close relationship to Akito, and confessing a crush certainly does seem like something a young boy might do with a trusted adult (whether that trust is actually deserved is beside the point).  But now he’s able to confide in Kisa (and his Mama) first, which is just as it should be.

Yuki: I wonder what it’s about…

Haru: Who knows…but considering how Akito’s been acting lately, it might not be bad. Maybe.

Yuki: He has been a bit different lately, huh? Ever since what went down, it’s like he’s been battling it out with various things. […] But I wonder…is he fighting on his own…?

Yuki: Shigure? He’s been out a lot lately… 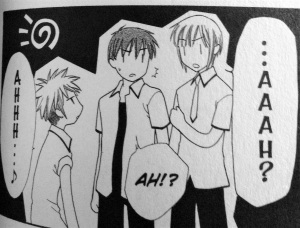 And then Yuki suddenly remembers to tell Kyo that Tohru is leaving the hospital the next day.

Kyo: I heard she’s getting out tomorrow! So it’s okay, right!? For me me to come pick her up too!? 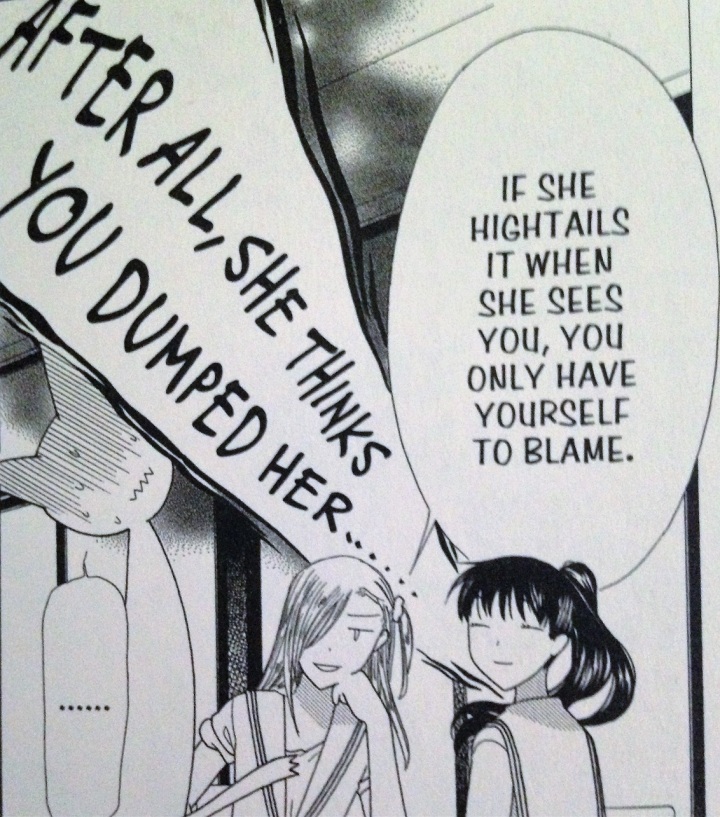 I’m jealous of them. Honda-san knows that Kyo isn’t a normal human being. She knows full well. But I… 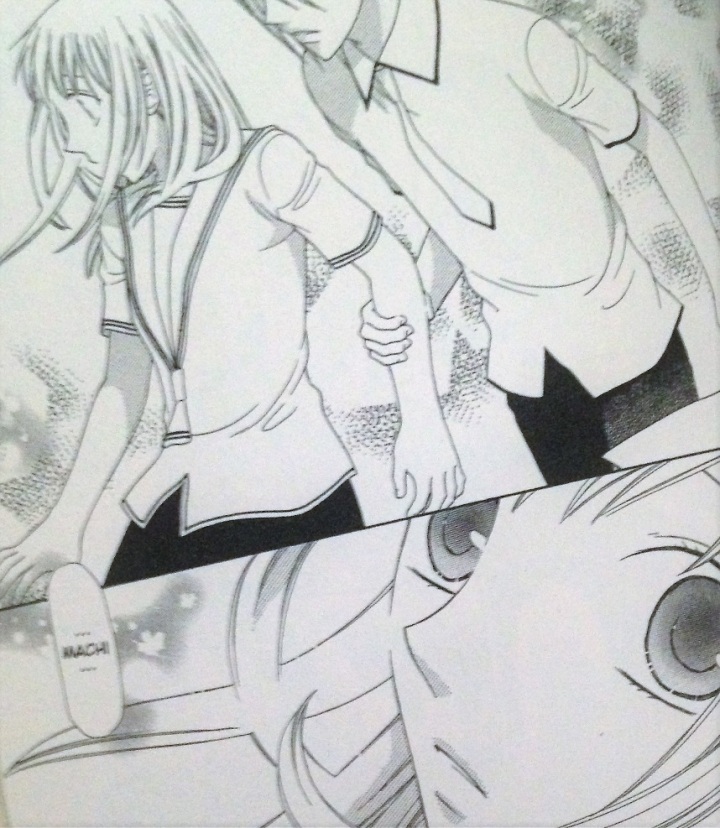 It looks like Yuki’s actually on the verge of hugging Machi, but then Kimi Kimi butts in and ruins the moment.  And so he must gather his courage for another approach.

If I want to be with her for the rest of my life, I have to tell her. Even if I don’t know whether she’ll accept it.

There’s just no way to love without risk. 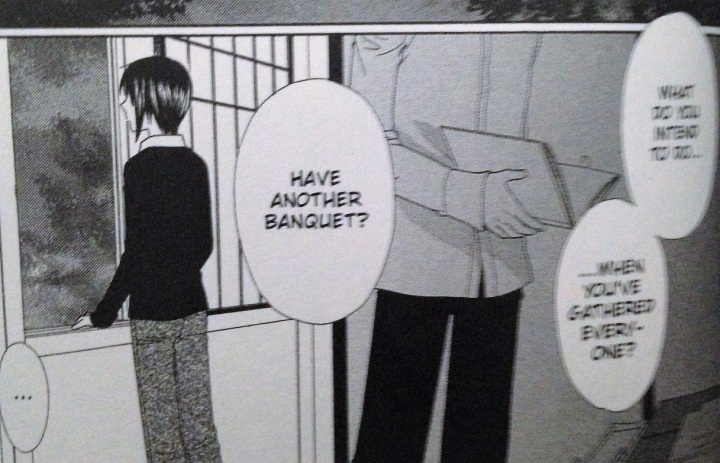 And speaking of risky love…

Shigure: I see. If that’s what will satisfy you, then I’m all for it.

Akito: “All for it”…you mean you’re relieved…you’ll be free of me, and you can go wherever you damn well please. It’ll be a relief for me too, since I won’t have to tolerate any more of your sarcasm. I’ve had quite enough of you making fun of me.

Shigure: I see it’s going to take a while for that temper of yours to be cured.

Akito: That’s what I’m talking about!

Shigure: I’m not “making fun” of you. I’m teasing you. You should know the difference. And here. A present from me to you. You could call it a “parting” gift. 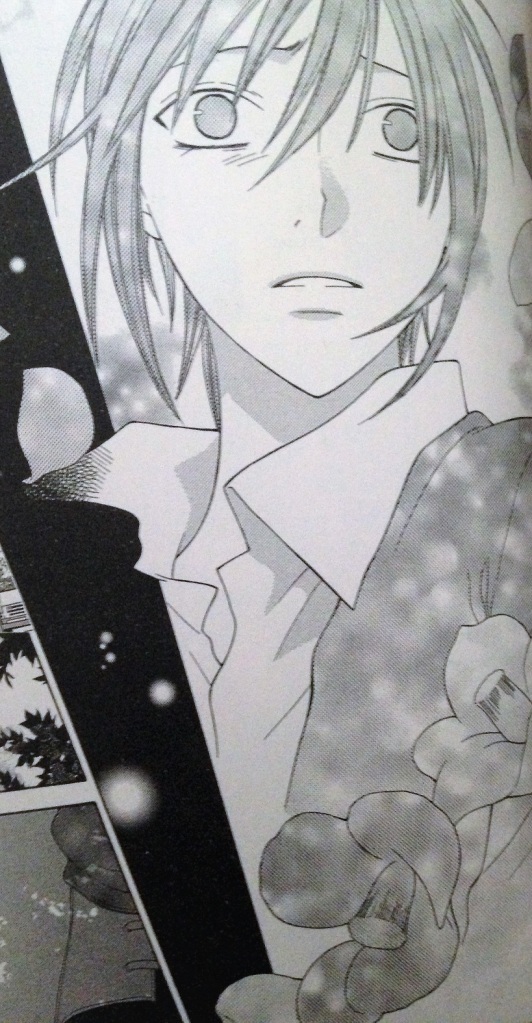 Okay, maybe he doesn’t deserve a punch for that, but that still merits a slap in the face.  Akito clearly thinks he’ll run off the moment his Curse is broken and is just as clearly upset about it. Now is not the time to be pedantic about what’s “making fun” and what’s “teasing”. At least Shigure seems less hostile now that Kureno’s gone (although I’m not sure if Akito’s told him about the more recent curse breakages or not).

And now it’s time for the long-awaited reunion between Tohru and Kyo!

Yuki: Try not to screw up. As dumb as you are, just be yourself.

Poor Kyo has a lot of tough love (and love for Tohru) to contend with. 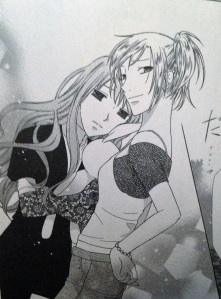 “Be myself”…what does that mean for me? How did I talk to Tohru before…? Huh? I can’t remember…In the first place, will she even accept me now? After what happened, she thinks I dumped her cold turkey. And what about me? Do I still really love her? What do I love about her? Why do I love her? How much do I…? 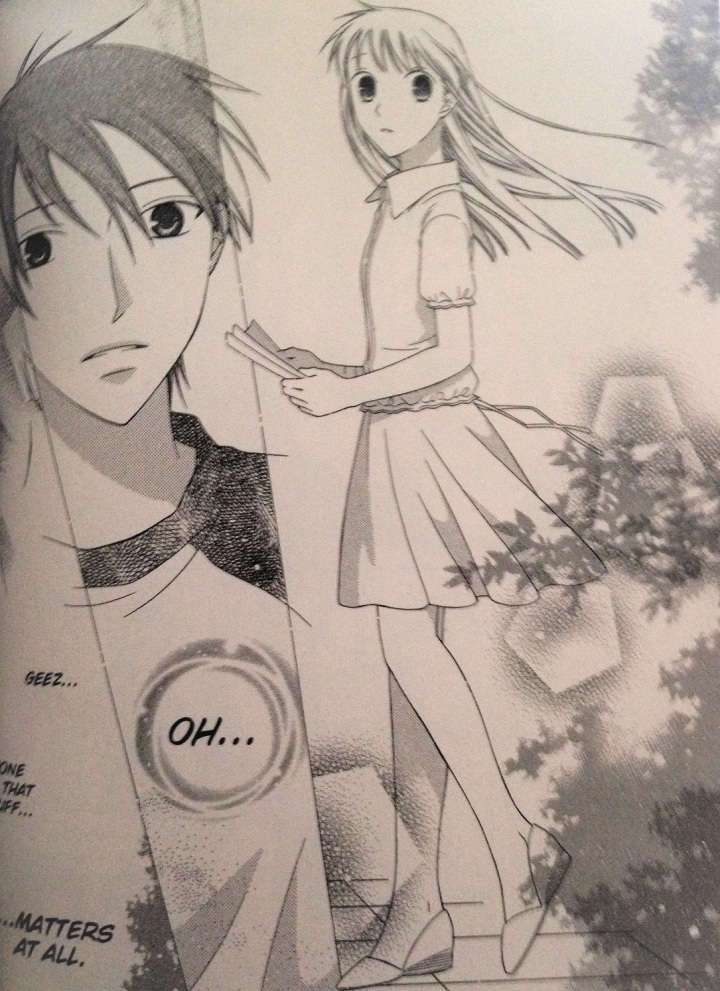 And then Tohru runs off, just like Saki and Arisa had predicted. 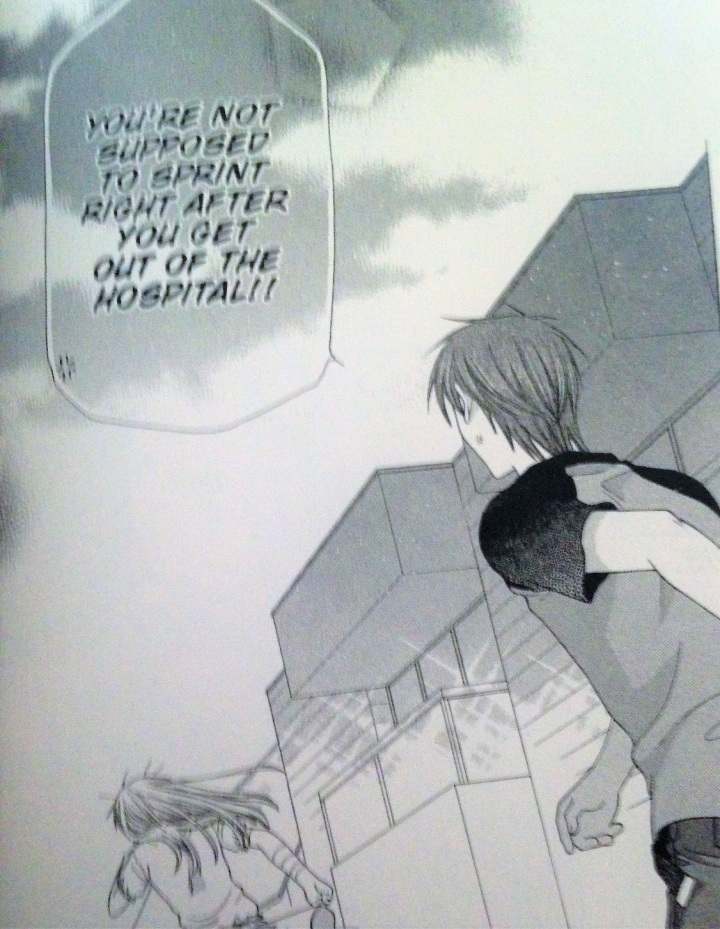