Kyo takes one step forward and ten steps back. Thanks to Akito, naturally.

Akito: Kyo, why are you crying? Are you upset? Could it be you’re in “love” with Tohru Honda? That would be marvelous! A monster in love with another monster!

Akito: This isn’t my fault! You’re the one who’s deluded! That girl thinks she’s so important even though she’s an outsider!

Kyo: Why!? Why do you hate her so much!? You let her live in that house! It doesn’t make any sense! You could’ve refused back then! What the hell are you thinking!?

This is a very good question, and one that’s never directly answered in the story.  Fortunately, we will get enough pieces of the puzzle to be able to at least hazard a guess…eventually.

Akito: So quick to act like I’m the bad guy. So which is it!? Are you in love with that girl or not!? If you are, you truly are a fool! A monster in love! How can a monster who killed its own mother be in love!? Do you really think you have the right to be in love with anyone!? Do you think for one moment something like that would be allowed!? Kyo…come on, Kyo. Think about it again. Who’s really at fault here? Who really dragged that girl into all of this? 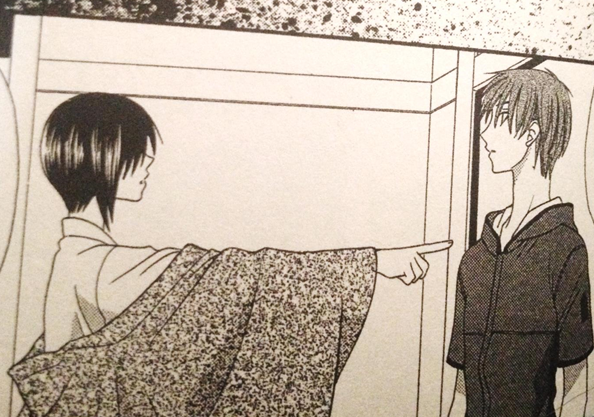 Akito: Although, that girl is to blame as well…

Again, he’s taking all the pain and blame on himself…or at least that’s what he thinks he’s doing. But just like how his silence and denial ended up hurting Kazuma more than the public shame would have done, it’s pretty clear that Tohru would prefer Kyo being honest and straightforward, no matter the pain that follows.

Akito: For once, you’re talking sense. And of course you’re not going to beat Yuki, so a lifetime of imprisonment is a foregone conclusion. But believe me, you’re better off that way, right? You don’t want to get that girl, or Kazuma, or anyone else involved more than they already are. For their sake. Having you out of their lives is the best thing that could happen. It’ll be all right. Even though you’ll be locked up, I’ll come visit you. I’ll be by your side. You won’t be lonely.

Akito: I like you, see? I really do love you, Kyo.

And then Akito feels the need to wash his hands after hugging Kyo.  I honestly have no words.

Kyo: What’s the point of protecting one little flower? Where do I get off staying alive because of other people’s sacrifices…other people’s lives!? Stealing the most precious thing of all, trampling on other people!

Kazuma: And yet, you are still alive because you haven’t given up hope completely, no? Because you know that not every person in this wide world will reject you. […] Even if you don’t have hope right now, I promise it will come to you again. Just as how, no matter if you struggle or try to ignore it, you will be assailed by despair once more. By that same token, you will also be visited by hope. Again and again…hope will always bloom.

Kyo: (internally) I’m sorry. I’m sorry, Master. I did understand. I was only pretending that I didn’t. The truth is, I knew it. I knew it all along. Just as there’s rejection in this world, there are people who will reach out to you.

You know how I said that Kyo must have some prior connection to Tohru? Well, that’s all but confirmed here, but as always it just raises more questions, the main one being, Wait, is that Kyoko-san!?

It bloomed right in front of me, and kept blooming. A teeny, tiny flower.

Kyo: Yeah, I kinda…got in a fight.

Tohru: A fight!? With Akito-san?

Kyo: He told me not to come back. […] It’s okay. I just feel bad for you cause you were happy for me. But I really don’t care whether I get invited or not. In fact, you could say I’ve never cared less. 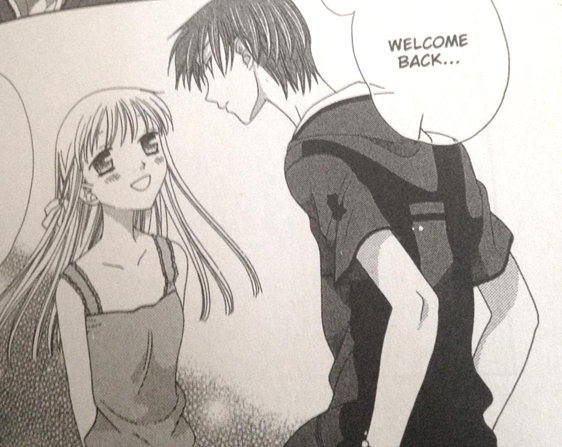 He’s decided that he just wants to spend his “last days” with her…and I’m a little uncertain how I feel about that. On the one hand, it is kind of selfish to hide his feelings and engage her affections all while he believes that he’ll have to leave her relatively soon, but on the other hand LOOK AT WHAT THIS KID HAS GONE THROUGH ALREADY. He literally thinks his mother should’ve murdered him.  So I’m just holding out hope that Tohru will be able to guide him to better life decisions.

I wanna be with her…until I gotta go far away. Until that moment….