Kyo is forced to face his feelings and has an epiphany at the worst possible moment. 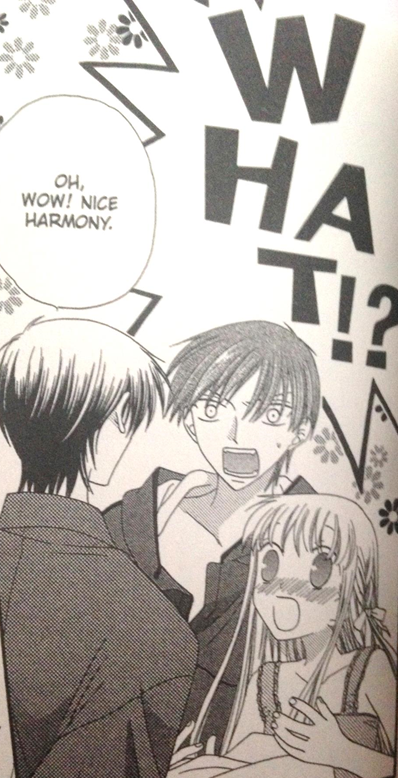 Shigure informs these two that Kyo has been invited to the annex. They have very different feelings about this.

Kyo: Wait a second. Then she’ll be…

It takes a while for Tohru to cool down and realize that Kyo might not be so thrilled to see Akito, but at least she’s able to see him off in good spirits. 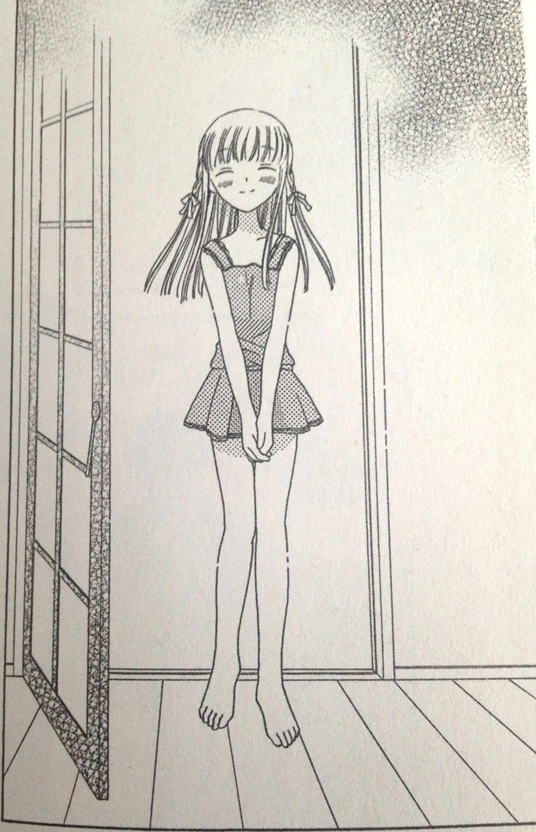 Kyo: It’s just like New Year’s. We’ve left her all alone again…What the hell are you guys doing!? Did you come here on vacation so you could abandon her!?

Methinks Kyo is projecting his feelings a bit…

Yuki: Then what about you? What are you doing here? You can’t stand up to Akito either. So quit with that arrogance. I’ll warn you again. Don’t be an idiot and lose your temper in front of Akito. 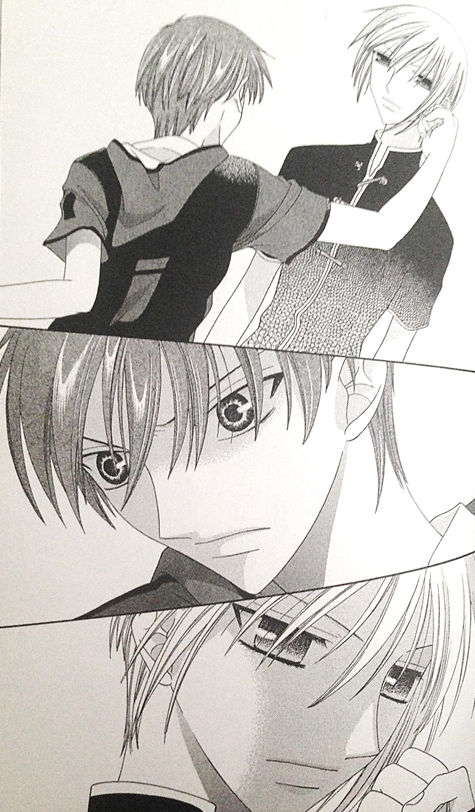 Yuki: Please. Enough. Both he and I should accept that this is just the way we’re made. In the end, that’s all we are.

Yuki’s finally through with acting the part of the Cunning Rat just because that’s what people expect from him.  He figured out that it’s not actually who he is, just something he’s been trained to do by the Sohma family, a role he doesn’t need to perform. 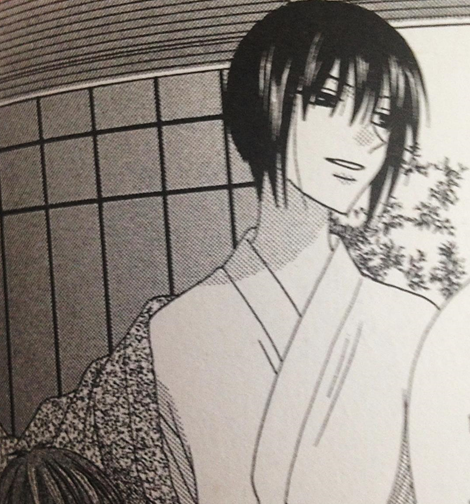 Akito: Welcome. It’s been a long time since we’ve spoken face-to-face. It’s all right. Come in, my pathetic monster.

Akito likes to turn his subjects backwards, to keep them running full throttle in a downward spiral.  Presumably he attempted that with Yuki, too, but the result can’t have been what he anticipated – instead of retreating to his old patterns of inaction and self-loathing, he realized something he wouldn’t have seen otherwise and continued his slow climb.

Akito: How goes our wager? The bet you made with me about whether you could beat Yuki? Admit it, it’s impossible, isn’t it? He’s out of your league, right? You can’t beat him? You’ll never be able to beat him? Didn’t I tell you? From the very beginning, the Cat has never been able to beat the Rat. It’s how you were made. To the end of your days, you shall never beat Yuki. You were made like that from the start. It’s destiny carved out for those who are possessed by the Spirits of the Zodiac. That fate is in your blood. I told you that before, remember?

From Akito’s perspective, this was clearly just a wild goose chase meant to ultimately lead Kyo deeper into despair. He believes that the roles of the members of the Zodiac are an intrinsic part of their being, a part of their nature that can’t possibly be changed. 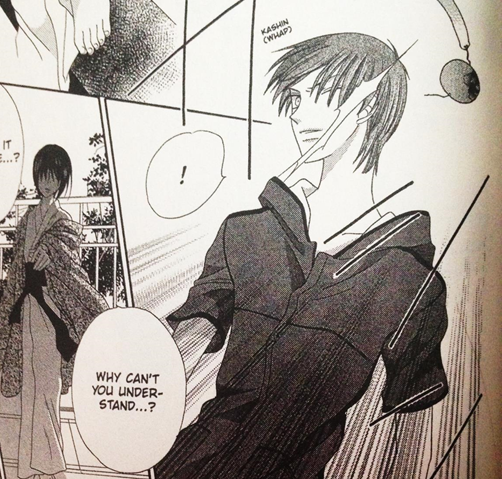 Akito: It is true.

Akito: But it is! You murdered your own mother.

This is the fundamental narrative that Kyo has lived with all his life: Not only that he’s a monster and everyone he loves will be hurt, but that he’s a murderer who personally hurts the people that care about him, that his very existence hurts others.

Akito: You should have died instead. No matter how you look at it, everyone would have been happier if you had never been born. 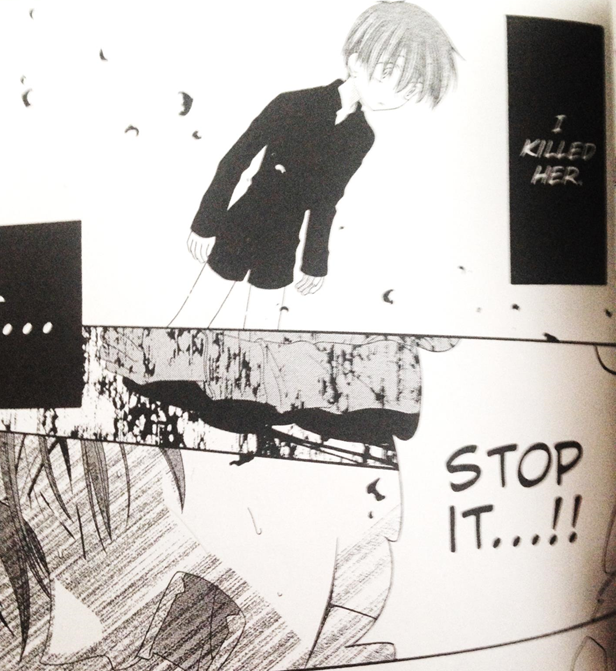 This scene breaks my heart every time. Just seeing Kyo take all this abuse and barely even yelling back is so much more disturbing than it would have been if Akito had beaten him half to death.

But then Akito makes the mistake of turning the conversation toward Tohru.

Akito: That girl…I hear she wasn’t even upset when she saw your true form. Impressive…

Akito: It really is quite impressive. What, is she an angel? Or perhaps a saint? Or rather…a “monster” herself? After all, isn’t she just a little too perfect? Don’t you find people like that frightening? In fact, she’s so perfect, she’s a “monster.” That Tohru Honda of yours…I mean, come on. Any normal person would flee if they saw you in that form. 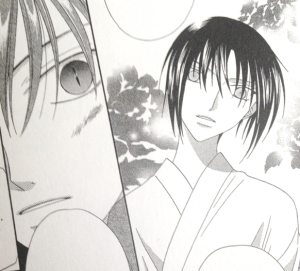 This is another case where it’s helpful to consider how Akito came by this intelligence.  I think it’s safe to assume that he heard all this secondhand from Shigure, who would 1. Have his own ulterior motives in giving such an account which would likely color the story and 2. Not include what happened in the woods (since Kyo and Tohru were alone).  So between those constraints and what we know of Akito’s opinions, his conclusions would make sense.  And this is why Tohru’s flawed, human characterization is so important.

Kyo: You don’t know anything. You weren’t there that day. You didn’t see what happened. You don’t have the faintest idea of how scared she was that day! So how can you say that about her!?

Then Akito literally resorts to screaming over Kyo’s words that he doesn’t want to acknowledge.  Talk about childish… 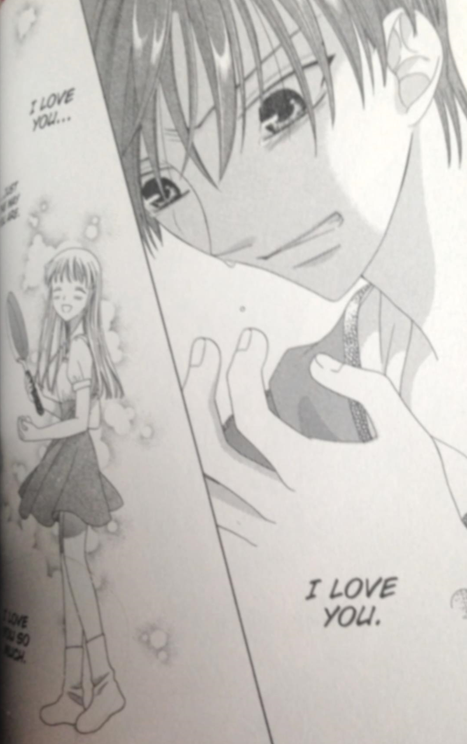 Why does it feel like he’s almost horrified to realize this?  Maybe because Akito’s still in the room screaming his head off.