As the story begins to build toward an even bigger turning point, we take a little time to get to know Uo-chan before things get crazy.

Arisa: Did you find your hair tie?

Saki: No…it must have floated away. This is a pain; the pool is no fun when my hair’s like seaweed.

Then Arisa is brought to tears by the sight of Tohru in her old school swimsuit (because Japanese schools have uniform swimsuits, at least for elementary and middle school).

Arisa: I’m not saying she doesn’t look cute or it’s embarrassing or anything. It’s just…it’s like, the same feeling I get when I see an old man buy his lunch at the convenience store! The old dude may not care, but it’s like, I can’t stand seeing that! Like it breaks my heart! And I got no reason, but I break down crying! Right there in the store! That’s right! I cry as I ring him up at the register!

Anyhow, she cheers herself up by concocting a plan: Get the Sohma guys to pitch in and buy Tohru a new swimsuit as a gift.  Although I think she only dragged Yuki and Kyo along on the shopping trip because she likes making them squirm.

Arisa: I told you before, she saved me. But more than that, I can feel at ease in this “respectable” world because I’ve got Tohru.

Then Arisa gets into the story of how she met Tohru in middle school, while she was an active member of a girl gang.

Arisa: Well, I had a chip on my shoulder back then. I was like a lion that hadn’t been fed. A problem child that was too much for my teachers and parents to handle. I wonder why it’s so easy to “go bad”? Before I knew it, I’d joined “the ladies”. […] We beat people up, got beat up, started fires, got chased by the cops…to be honest, if I told you everything we did, it’d make your hair stand on end. The point is, I was an unrepentant moron. But even so, there was one person I idolized. That was Kyoko-san.

“The Red Butterfly” was young Arisa’s hero, so when she heard that her daughter might be attending her school, she jumped at the idea of actually meeting her.  But of course Tohru was nothing like she expected.

Uotani helps her out when she drops a stack of books…and then she asks Tohru’s name.

Uotani: “Honda”? If the punch line to this is that you’re the Red Butterfly’s daughter, I’m gonna clobber you!

Tohru: Oh, that’s right! That’s what they used to call my mom!

Tohru offers to introduce her to her mom, and Arisa’s first impression of the Red Butterfly is her glomping Tohru. 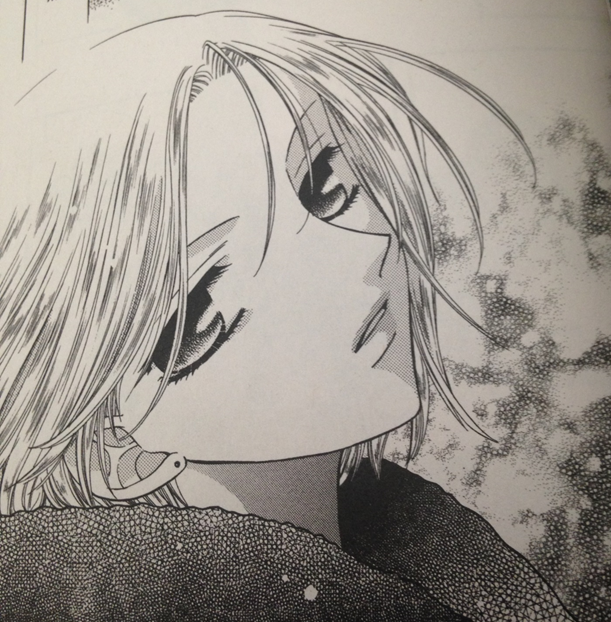 Arisa: At the time, it seemed like my hero had fallen off her pedestal. But budding love and respect came to replace admiration from afar. Not a bad tradeoff.

Seeing a character’s entire arc reduced to a story of a couple chapters stands in stark contrast to the slow development most of the others get in this series, but it’s certainly nice to have a handful of characters that basically have their lives together already (or as much as a teen can have her life put together).

There is an allusion to Tohru and Arisa’s first meeting way back in episode 6 of the anime (and a version of the conversation that starts Uo-chan’s flashback),  but of course all the meat of it was left out.