We finally get to see what makes Hiro tick.

Hiro and Kisa have started hanging out together with Tohru at Shigure’s house, but of course Hiro keeps annoying Kyo (both by arguing and by bossing Tohru around).

Shigure: Stop right there, Kyo-chan. Hii-kun is just going through a rebellious stage.

Kyo: What? I don’t know about any rebellious stage, but if he’s here to flirt, he oughta stay home.

Shigure: I wouldn’t call what he’s doing “flirting” – when a member of the Zodiac flirts, they have to be pretty determined, whether it’s with someone from the “outside” or another Sohma.

Honestly, I wouldn’t call what Hiro does with Kisa “flirting” either, but I’m sure it’s for different reasons than Shigure.  Hiro explains to Kisa that he puts up with Tohru because he knows it makes her happy (which makes me happy), then runs off when Tohru interrupts them.

Kisa: I’m sorry. Underneath all that, Hiro-chan is very nice.

Tohru: You two really are close, aren’t you?

Kisa: I thought Hiro-chan hated me. When I was still in elementary school, we often played together, but then he suddenly became distant, and was cold even when he did talk to me. So I was really surprised and happy [to hear he was worried about me].

Tohru: Is that just a boy’s bashfulness? There may be another reason. All of the members of the Zodiac are suffering, given their circumstances. They have complicated feelings and confused emotions. There may be something bottled up inside Hiro-san’s small body too. Something that’s causing him anguish.

It turns out that Hiro told Akito how he felt about Kisa, and then Akito managed to put her in the hospital for two weeks.  All while Kisa was getting bullied at school.

Hatori: If it meant being the cause of someone dear to him getting hurt, he would rather become a coward. I’m sure Hiro is angry at himself, but he doesn’t know what to do about it because he can’t blame Akito.

Again, the idea that the members of the Zodiac can’t blame Akito no matter how he torments them.  And you have to wonder why Hiro would choose to confide in Akito in the first place (he hadn’t even told Kisa how he felt – he still hasn’t!). 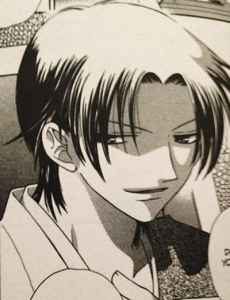 Hatori: That you didn’t already know all this. I thought Akito told you everything.

Shigure: I guess I’m not trusted either. Do what you want. Either way, all the chickens will come home to roost for Akito in the end.

That’s just a cryptic way of saying that no matter what anyone does, Akito will pay the price.  Also Akito evidently doesn’t trust Shigure in all matters, deep as he may be in his councils.

Shigure: It’s a good question. I would hate for a repeat of what happened to Rin. She’s getting out of the hospital soon, right? […] Then Haa-kun must be a little relieved. I don’t know why, but all of us suck at the important stuff.

Remember that “Haa-kun” is Haru…and I really want to strangle Shigure right now because spoilers.

Hiro: I don’t get it. How could an airhead like you do something I couldn’t? Are you really all that great? Can you make anyone’s troubles go away? Do you have the power to wipe out every kind of suffering and sadness? Can you save people? […] Would you stop with the modesty? It makes you seem like such a goody two-shoes. (internally) I wonder if she would’ve been able to protect Kisa any better if she’d been in my position? I love her. I wanted to be true to that feeling – I wanted Akito to understand too. Instead I was a coward. Kisa was hurt badly because of me, and I couldn’t tell her anything. I couldn’t say anything to Akito either. From then on, I kept my distance, as if I was running away. I knew she was being bullied, but I didn’t do anything about it. And yet, I still love her? I’m scum. (aloud) Why? Why am I so childish? I can’t do anything! I’m just a kid!

He just can’t seem to wrap his head around the idea that you don’t have to earn the right to love someone – you just love them and do whatever is in your power to help them, however small. 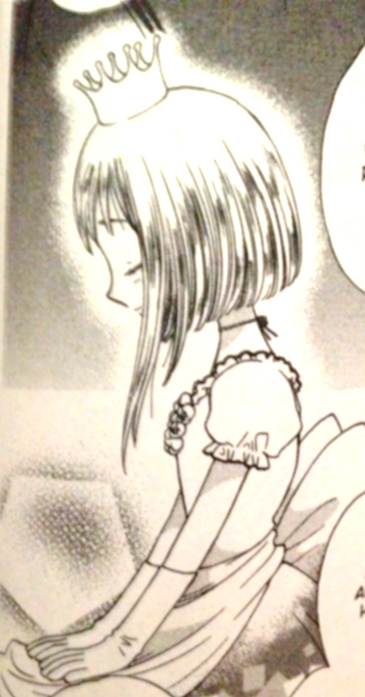 Tohru: You’re amazing, Hiro-san. […] My mom said a lot of people are scared to admit they’re still “children”, so they just avoid the issue. She said someone who can admit that has real courage. It’s not true that you can’t do anything, Hiro-san. You can become a wonderful prince who protects Kisa-san. After all, you have courage in your heart.

Hiro: In other words, I’m nothing like a prince right now. Is that what you’re saying? […] Well, that’s true enough.

This chapter lost a lot of impact in the anime version, mostly because the stuff about Akito was majorly turned down – his “beating” Kisa is just shoving her to the ground in front of Hiro.  Also there’s no allusion to Rin, but I can’t blame them on that one.

Hiro: Just watch me. I swear I’ll become a prince.