We’re approaching the finale of the anime, so I’m going to be talking about that adaptation a lot in the next few chapters.  If you’re familiar with the anime and haven’t read the manga before, you may well be thinking, “Wait, weren’t there a few more episodes in there? Like with the Sheep and the Monkey…?”  Yes, yes there were.  They just took a few episodes from later on and inserted them between the events of Chapter 30 and this.  I can certainly understand their logic, but I still hate how it screwed up the development of certain characters.

Anyhow, the three of them are out in the rain and Kyo’s being a sourpuss.

Yuki: Don’t worry about him. He gets mopey on rainy days.

Tohru: Ah, that must be why you’ve been in a bad mood lately. […] Is it an illness of some kind? 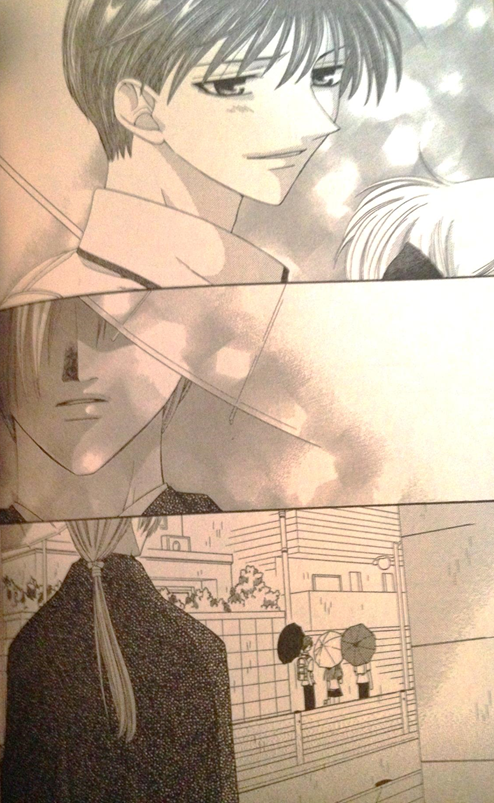 Just FYI, outside of a flashback or two, Akito doesn’t actually show up in this volume; all that stuff with him in the last three episodes was anime-original (and the creators of the anime didn’t really get Akito), so try to forget it if you can.

Then Kyo’s day gets worse when Kagura shows up, and Shigure literally thrusts him into her hands.

Shigure: You can borrow the boy, Kagura, so why don’t the two of you go on a date or something?

Tohru actually shows her support for this plan by handing Kagura a shopping list, giving them something useful to do for their “date”.

Tohru: She may already be taking it down a notch. It looks to me like she’s holding back the urge to see him every day. (internally) I can see that she’s giving him a little breathing room. And it feels like she has a reason…

Tohru discovers a little thing that she hadn’t thought about before (Yuki and Kyo, and probably the rest of the Zodiac, receive a monthly allowance from the Sohma estate), and that gets her thinking.

Tohru: Their circumstances, behind the scenes info…there’s so much that I still don’t know about them. But even if I do find out everything one day, I want to become the kind of person who accepts them just the way they are.

Kagura: Say, Kyo-kun, Tohru-kun doesn’t know yet, does she? Do you intend to hide it from her forever?

Kyo: Shut up! That’s got nothing to do with you!

It seems safe to assume that’s why Kagura has been giving Kyo space – she’s waiting for him to confess his secret to Tohru, whatever it is.

Kyo: Why? Why are you so obsessed with me? It’s weird, ain’t it? If you were normal, you’d avoid me. Y’know, keep your distance.

I’ll be honest, I’m a little confused by Kagura’s internal monologue (the wording was different in the Tokyopop edition, and I’m not familiar enough with Kagura’s character to guess what they’re getting at here).  But the gist of it is that Kagura and Kyo were once pretty close when they were little, but something or other altered their relationship.

And then we finally meet the mysterious observer: Kyo’s master. 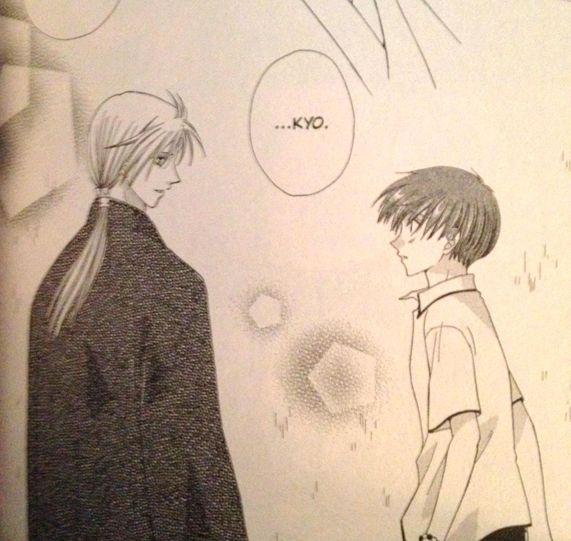