This chapter is mostly about Kyo and a little about Valentine’s Day. 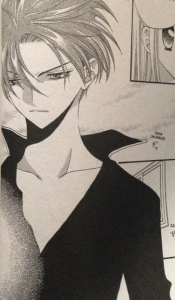 So Kyo is acting broodier than usual, but also very distracted (as in he didn’t even notice the impending holiday).  Once he does realize what day it is, he tries to make a break for it, but runs afoul of one Mayuko-sensei. 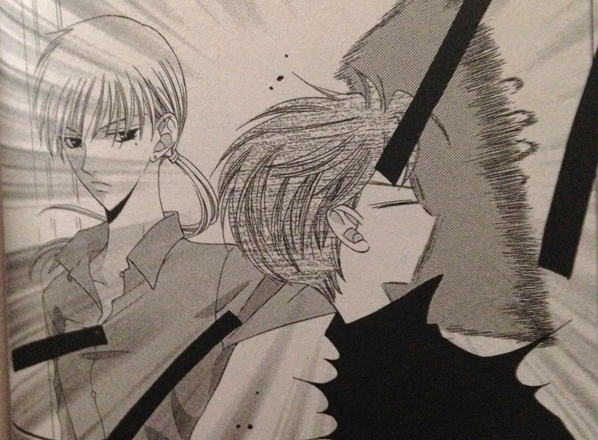 She’s kind of exactly the sort of tough, no-nonsense teacher necessary to rule a class consisting of Kyo, Yuki, Saki Hanajima, and Arisa Uotani (but mostly Kyo), although they naturally don’t appreciate their good fortune.  Anyway, Tohru wonders what about Valentine’s has Kyo so upset, and finds out after school when Kagura meets up with them.  She asks him on a date, and when he shows no inclination to play along, she tries a different tact: Making it a double date with Yuki and Tohru.

Kyo: Hey! Why do I gotta go on a double date with yucky Yuki!?

Tohru: What!? I-I’ve never been on a date before…are you sure about this!?

Tohru’s just so ecstatic about it that Kyo finally caves. 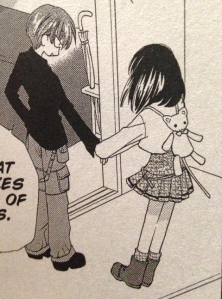 Kagura: Haru-chan told me that you and Yun-chan are starting to get along. He said if you got to know each other more, you might even become friends. I’d be happy if that happened.

Then Shigure figures this is the perfect time to start nagging Kyo about getting to know Yuki.

Kyo: Just to make it clear, I hate Yuki’s guts! And I ain’t inclined to stop!

Shigure: Why does it sound like you’re obligated to hate him? Those eyes…they look like you’re afraid to learn more about him.

This isn’t just about Yuki, and whether this is a slight translation error or Takaya-sensei is deliberately having Shigure misread the situation (I’d believe either), Kyo runs off and Tohru follows.

Tohru: He really did look like he was scared. I don’t really know what it means, but it seems like his hatred…he’s desperately protecting something with it. Protecting what? Himself? I’m sure it’s someplace deep and dark, beyond the reach of my thoughts.

Kyo: Forget it. Forget what I said back there. It’s got nothing to do with you. Just leave me alone. 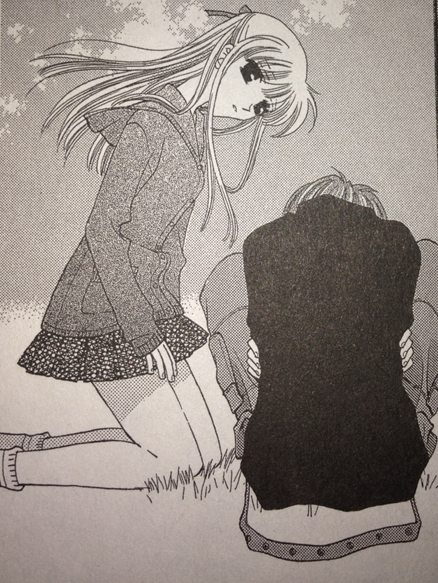 Tohru: You don’t have to…get along with him. To be honest, I wanted the two of you to become friends. But…you don’t have to. Even if you hate him…(internally) if that’s what it takes for you not to be afraid…(aloud) it’s okay.

Nobody can change their feelings overnight, even if they want to, and Kyo is clearly doing all he can right now to cope with some intense pain or trauma.

Tohru: Kyo-kun is actually very sensitive, and so is Yuki-kun. It’s as if they hurt each other just by coming into contact. They’re saddled with suffering, pain, and anxiety. I hope I can help them get rid of all of it someday, like they did for me. Because I want them both to be happy.

We’re just starting to peer into the depths of their suffering, so naturally the anime gutted this chapter, leaving only a lighthearted Valentine’s episode. They even left out Mayuko-sensei!  They also opted to remove the double date completely, the better to avoid this next chapter.

Next time: We finally get some insight on Shigure…