I had a dream about someone I love. And then there was nothing else I could do. 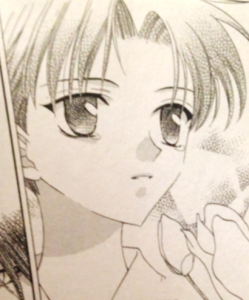 I’ll just get this out of the way right now: I hate Shigure. I loathe him from the bottom of my heart, which is actually kind of impressive in its own way.  I simply cannot see any reasonable justification for his actions over the course of the series.  It’s particularly exasperating to see how popular he generally is, probably due partly to a combination of his more sympathetic characterization in the anime and people skipping the first few volumes because they’re “covered” in the anime.

Now that that’s off my chest, on with the show!

Tohru: Shigure-san is always smiling, so I can’t tell if I’m causing him trouble or not.

Yuki: There are only a handful of people who know what Shigure is thinking. Hatori is one of them. A long time ago somebody said, “He’s like a ripple on the water. When you approach a ripple, it backs off. Even though it brushes against your feet, if you try touching it, it moves away. A ripple can’t be caught, and neither can he.” That’s more poetic than he deserves. I’d say he’s more like a jellyfish drifting on the waves. […] (internally) He may be smiling on the outside, but in his heart of hearts, I bet he’s up to no good.

Hatori appears to have originated the jellyfish analogy, and while it may sound like a funny jab, it strikes me as pretty accurate. Shigure may look harmless, but he’s got quite a sting.

Tohru’s comment about Shigure always smiling invites comparison to Tohru herself.  They both hide their real feelings behind laughter and smiles, but it’s the feelings they mask that make the difference.  Tohru buries her sorrow and pain while endeavoring to make the people around her happy.  Shigure hides his “dastardly” designs and often uses jokes and banter to further his plans. 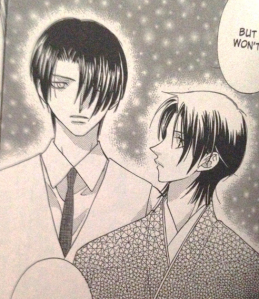 Hatori: You seem pleased with yourself. Everything’s going according to your plan. […] Claiming you’re not using her…what a liar. Both you and Akito are doing a fine job using Honda-kun as a pawn for your own aims.

Shigure: Do you remember the morning I had that dream? You, me, and Aaya cried that morning. For you guys, it became something painful, but for me, it lingered in my heart.

Young Shigure: That love, that passion, so mesmerizingly bittersweet…I want to make it last forever. I want to hold it in my hands in a physical form. And I will.

Shigure: That vow is still right here [in my heart]. If I can fulfill it, a few falsehoods and a little manipulation won’t trouble my conscience. Even if someone gets hurt as a result.

Pursuing this “dream” of his is one of the few things beyond himself that Shigure cares about, but he cares about it far more than any harm he might cause in the process.  He mentions that Tohru doesn’t really have the same effect on him that she does on pretty much all the other Sohmas she’s met, and I can see two possible reasons for that.  He appreciates her efforts and even has some affection for her, but he doesn’t value virtue for its own sake; she can’t directly fill any of his perceived wants or needs.  He also feels no need to change who he is or how he lives his life (unlike the rest of the Sohmas), and one of the effects that Tohru tends to have is making the people around her want to better themselves.

Shigure: She makes me think that maybe I have the filthiest soul of all. […] That’s why Hatori, I’m even envious of you. I may be the most cursed of us all.

Hatori: Shigure, whatever results are in store, be sure you’re ready for them. […] I’m not going to be your ally, but I won’t become your enemy either.

Shigure’s story is intimately connected to the nature of the curse itself, so naturally it’ll be a while before we learn more about him… 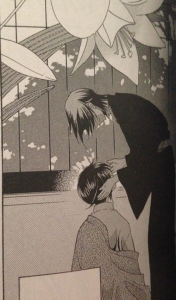 Shigure: Take my teeth. Take my bones. Those things aren’t important to me. I will have it. For that I’ll lie and use others. I will make that dream last forever.

Why, yes, this is exactly what it looks like: A toxic relationship unhealthy for everyone involved and many uninvolved. 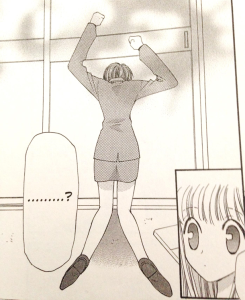 Anyhow, everybody comes home to discover Shigure’s poor editor on the doorstep.  Because he enjoys tormenting her (of course).  I would not wish that job on anyone.

Micchan: Please take your work a little more seriously. It is important to you…isn’t it?

Shigure: The most important thing to me has always been me.

There are grand total of two jokes from this chapter that made it into the anime. That’s it.

Catch me if you can.