At this point, everything is awful. 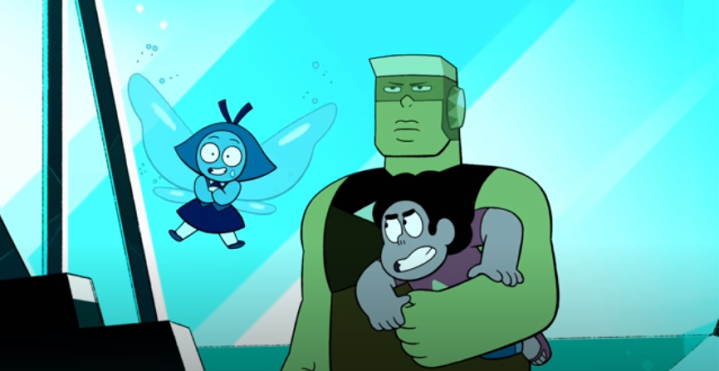 Season 5 kicks off with Steven realizing what I’m sure most of the viewers already noticed: His heroic sacrifice wasn’t quite as effective as he intended.

Aquamarine: Oh! Looks like we got one of the humans anyway. Don’t know what we’ll do with just one of them, but I guess that’s for the Diamonds to decide.

Steven: Wait! Aquamarine, the deal is off! You were supposed to take me, no humans! That’s a human!

That’s quite the awkward position you’re in, Lars.

Lars: Steven, this is all your fault. All this weird alien stuff, this is cause of you, isn’t it?

Steven: Yes, of course it is! That’s why I turned myself in, to save all of you!

Lars: Well it didn’t really work out too well, did it?

Steven: Well, everyone else managed to get off the ship, so where were you?

Lars: I ran and hid, Steven, like any sensible person would…do…if they wanted to…get trapped on a ship…oh.

Lars: Sadie was in trouble and I didn’t do anything. Actually, no, I did do something! I ran and hid! Just like I always do. Just like I ran from the potluck.

Steven: But you were abducted! That’s not your fault.

Lars: No, I trashed my roll and ran away. Then I was abducted. Why couldn’t I just let people eat my food?

It was a series of small bad decisions that got Lars into the huge mess he’s in now, and he knows he’s got no one but himself to blame.

But Steven’s not ready to give up yet – at least on Lars.  So when Aquamarine is out of sight, he concocts a plan.

Steven: Just hear me out, I have a plan. I’m gonna need you to be my arms.

Steven: Lars, pull my pants off.

Steven: Trust me! I’m trying to save you!

Lars: What if I don’t want to be saved? What if I want to stay trapped here and fly around space, and why your pants you weirdo?

Steven: Just do it!

Steven: Great. Now tie one of the legs into a lasso.

Steven: What are they doing on the floor?

Lars: I don’t know, Steven, what are we doing in space?

As annoying as he is, you can still totally understand where he’s coming from.  It sure does seem like a hopeless situation.

Lars: I still don’t know what that is!

Steven: That! That thing! Come on Lars, you can do it!

Then he proceeds to throw the “lasso” away, and once again Steven gets angry at Lars.  Funny how that always seems to happen when somebody’s life is at stake and Lars is being whiny and uncooperative.

Steven: What is your problem, Lars? Why did you do that?

Lars: Why’d you think I’m capable of anything? You think I can do all this stuff, but I can’t! I can’t because…I’m a wuss, Steven. I’m just afraid. I’ve always just been stupid and afraid! Not like you. You’re always helping people. You’re never afraid!

He’s so scared of failing (or being mocked) that he’s stopped trying to do much of anything.  And now, even when there’s really nobody around to impress and his life is on the line, he still can’t bring himself to try.

Steven: Lars, I’m afraid right now. I thought if I turned myself in, I could fix everything, but…I don’t wanna do this, Lars. I’ve been to space before, but not like this. They’re taking me straight to their terrible leaders that want to destroy Earth and destroy me for something I never even did. I just wanted to save everyone, but I couldn’t even do that. Because look, you’re still here. […] I’m sorry. I don’t know how I’m gonna get you out of this.

The sheer enormity of what he just did is finally starting to sink in, yet all he can think of is getting Lars out of trouble.  Because that’s what he always does – help other people first and worry about his own troubles later, or better yet, keep pushing himself and never have to think of that at all.

Lars: We’ll…figure it out? We’ve got, like, a billion lightyears til we get there, right?

Steven: For the first time ever, you’re gonna look on the bright side? You don’t have to sugarcoat this. Come on, you never do that. You’re always real with me about how much everything sucks.

Steven: You know what’s even more messed up? Even though you’re in huge trouble, and it’s all my fault, I’m kinda glad you’re here? I…I don’t wanna be alone right now. Isn’t that awful?

Lars: Dude, at this point, everything is awful.

Everything is awful, but at least they’re not alone.

And then Topaz finally makes her presence known, because she is actually quite sentimental and kind of adorable.

Topaz: That’s so…beautiful! Even in the clutches of certain doom, you’re happy to have each other! I don’t know what Topaz would do if she didn’t have Topaz! I’ve always wanted to tell me how I’m helping me through this, but there’s always someone between us! They’re always sending me on these miserable missions…I’m always pretending I’m fine with it. I have to pretend I’m fine. But you two, you’re so honest, and open! So, I wanna help you guys. What do you need?

It’s funny how she quickly fades into the background (both visually and otherwise), largely because she pretends she can’t hear them and never even speaks a word to Aquamarine before this.  So she offers to send them off in an escape pod…but Steven refuses to leave, and before they can come to an agreement on who’s taking the escape pod, Aquamarine shows up again. 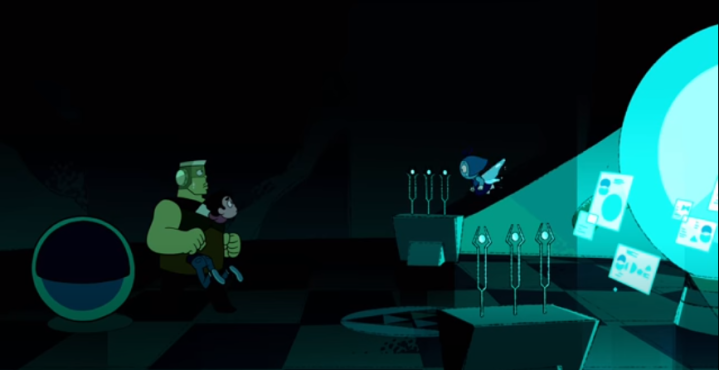 Lars: I can’t see what’s happening. Are we still escaping?

Topaz: Aquamarine, let’s talk about this!

Steven: Yeah, I bet you don’t really wanna hurt us, you- you probably just act mean because deep down you’re afraid you’re weak! Go ahead, let it out, we’re all sharing right now!

Aquamarine: Topaz! You had one job. And if you’re not gonna do it, you’re of no use to me!

Then things start getting intense.

Aquamarine: So…a revolt, huh? And what do you plan to do after this? Go back to the Diamonds, my Gem in your hand? I’m sure they’ll love that. You’ll be rewarded handsomely – by being separated, and shattered.

Topaz: What was I thinking?

Aquamarine: That’s the problem with you fusions. Sooner or later, you all become sentimental. We’re here. Look, just unfuse, and we’ll never speak of this again.

Steven: Topaz, you don’t have to do this!

Except they kind of do.  If they want to live within the Diamonds’ system, they have to fulfill their assigned roles.

This episode shows the promise of this final season – it has all this preexisting character (and world) development, and they’re ready to use it.  Lars has finally turned a corner in terms of development, after being stagnant for basically the entire show, but he’s still stuck on an alien world, so who knows how that will turn out?

Next time: The Trial…