Or: Sardonyx Steals the Show (literally). 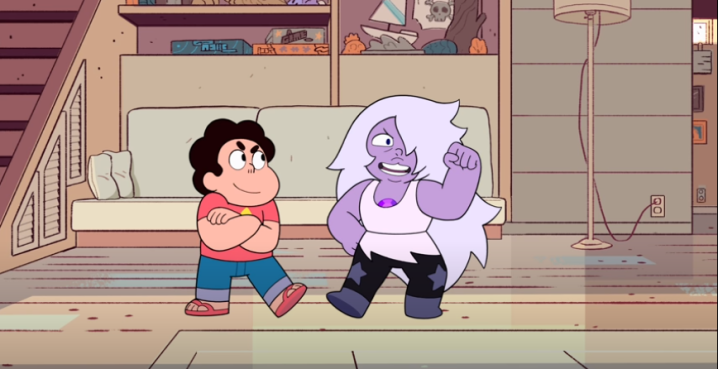 So Steven and Amethyst want to make a flashy debut with Smokey Quartz, but they are still the disaster combo.

Pearl: Steven, Amethyst, is there something you’d like to tell us?

Steven: So you guys know that we recently had an epic showdown in the Beta Kindergarten.

Amethyst: And you know that during it, we beat Jasper.

Both: But do you know who beat Jasper?

Amethyst: Ahem! We have someone we’d like you to meet. 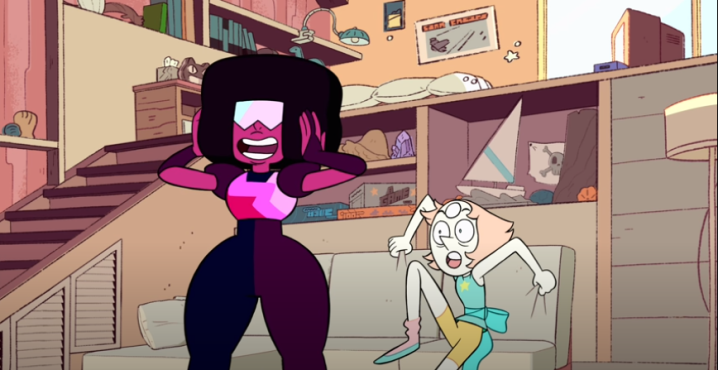 I love how Garnet seems genuinely surprised. And, you know, ecstatic.  She squees!

And they promptly form Sardonyx in response. 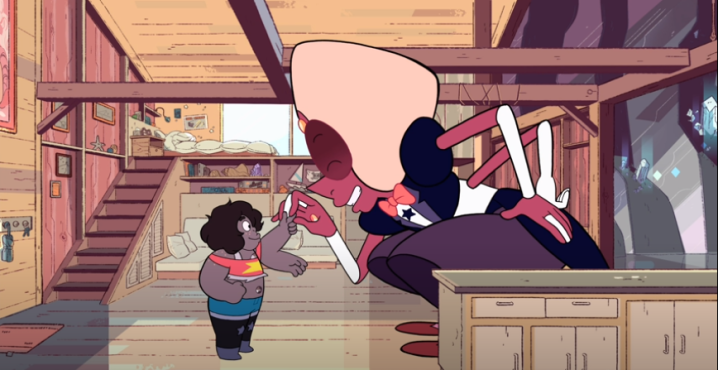 Sardonyx: You know the rules about weapons in the house. Mostly allowed, really, but with some exceptions. Oh, what a pleasure it is to meet you! You’ve made quite an impression already. In fact, there’s one in the wall over there, and there…

Why yes, it does appear that her intervention was partly to prevent Smokey from wrecking the house with their giant yoyo.  Also note how the first thing she does (before even properly greeting them) is to criticize them…

On a side note, my first instinct is to call Smokey “she”, but I’ll try to stick to “they”, for the same reason I use it for Stevonnie.

Sardonyx: Your act is tremendous, but your stage is too small. We need some space to get to know each other, something a bit more…infinite.

Smokey Quartz: You have a room in the Temple?

Sardonyx: It exists as long as I exist, and here I am! Come now, don’t be shy!

I mean, it makes sense, considering that Garnet has her own room. 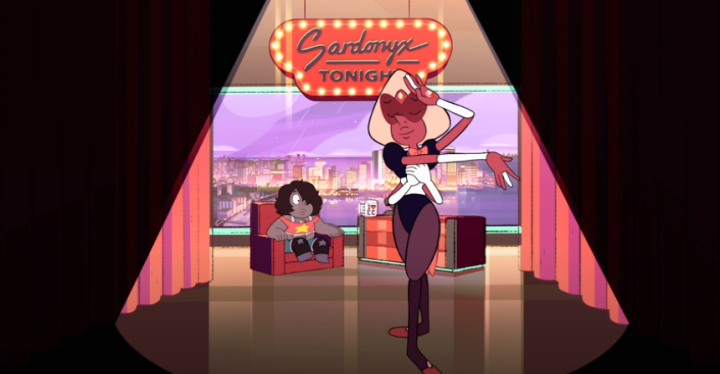 But not one as fabulous as this.  I love how she uses her extra limbs for double the gesticulation!

Sardonyx: Live from a metaphysical room in the Temple, it’s Sardonyx Tonight! Good evening, everybody! We have a brand new fusion with us tonight! I’m so excited I could just shatter. Everyone welcome Smokey Quartz! So tell me literally everything there is to know about yourself, and do not skip out on any of the juicy details!

Poor Smokey was clearly not prepared for an interview – as they quickly point out, they’ve only really existed for about ten minutes total.

Sardonyx: Listen Smokey, let’s talk, fusion to fusion. That’s a nice yoyo, but I want to know the yo-you! […] Smokey, there’s bound to be way more to you than just…a yoyo. You’re a fusion. You’re full of surprises! You just don’t know it yet.

Sardonyx: I’ve got it! Every fusion gets something new – a new power, a new weapon…

Sardonyx: Yes, but better. Let’s find out what’s new about you!

So either she doesn’t think the giant yoyo is worthwhile, or she thinks there should be some other new ability besides a weapon, which is pretty rich coming from a fusion whose only new thing appears to be her weapon.

Sardonyx: Smokey, you’re holding out on me. I’m ready to see your main event!

Smokey: You and me both.

Sardonyx: Now, Alexandrite has a throat full of flames. Whether that’s the cause of her raspy voice is up for debate, but there’s no room for questions when she attacks, exhaling a burning blaze! So I call this segment, Breath of Fire!

She just keeps looking for other “new” things, and she doesn’t realize that the fusion itself is what Amethyst and Steven are most proud of.  So instead they fail through all of Sardonyx’s tests. 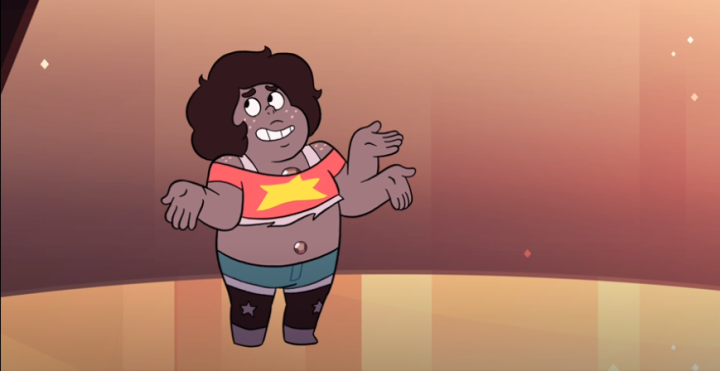 Sardonyx: There must be some common thread between Steven and Amethyst that’s heightened by their fusion…

I mean, it’s not surprising that Smokey would get into a self-deprecating mood at that point, especially considering how much of their bonding last season revolved around perceiving themselves as “worst Gem”.  But it’s still sad.

Sardonyx: They want…to impress us! They were planning this all morning, we hijacked their show! I was excited – it’s not about us!

So Sardonyx falls apart…and then the room follows suit.

Which means Smokey Quartz can finally show what they’re made of!  Which is to say, giant yoyos and love.

Garnet: You didn’t tell us that yoyo could grapple.

Steven: It can do so much stuff!

Amethyst: It’s better than a flail!

As awkward as it occasionally got, it was still fun to see two fusions interacting like that.