The rubies return to hassle our heroes some more, and to drop a reveal on poor Steven.

Lapis: They showed up on their little ship acting very angry, so I put them on timeout.

They try just releasing one of them to find out what they’re up to, but they all either don’t know or simply refuse to talk, so they eventually have to talk to the leader anyway (whom Steven has dubbed “Doc” in his attempt to differentiate the five rubies).

Doc: Where’s Jasper? Last time we came, you tricked us into playing that stupid game! Then, you said “She’s on Neptune,” so we looked, and she wasn’t there! She wasn’t on Neptune, or any other planet in this whole dang solar system! Tell us where she is right now! No games, no tricks, and no slick disguises.

So it seems like Amethyst’s mimicry is finally going to pay off! Because rubies is dumb.

Eyeball: I was on the ground in Facet 6 when I heard the tale of the Facet 9 Kindergarten quartz that could! They say that you popped out of the ground with your helmet on, and took out 80 Crystal Gems before the sun went down! When I found out this mission was to look for you, I nearly dissipated my form! It is an honor to finally meet you.

Amethyst: Yep, that’s me! Always huge, never small, all the time since I was made!

Eyeball: Wait a minute…you look different than I thought you would. 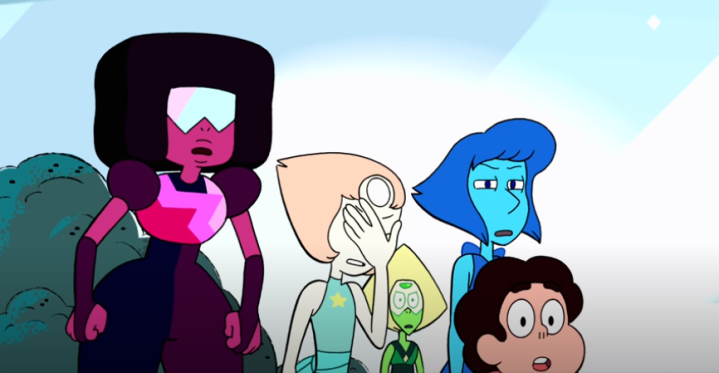 Great faces, but somehow Amethyst manages an excuse, and the rubies buy it.

Amethyst: Oh, you must mean my tan! You know, from the sun!

And then they finally get to the point: They’re supposed to pick up Jasper and bring her back to Yellow Diamond.

Amethyst: No! I mean…I, Jasper, have decided to stay on Earth.
Because…I gotta stay here, with these guys! Yup, gotta keep ’em prisoner. For the Diamonds. […]

Doc: Well, Yellow will definitely want to know about this. You’ll have to file a report at the nearest Diamond base.

Amethyst is confident enough that she can hold her Jasper impression for a trip to the Moon Base, and figures it’ll be worth it if they can finally get the rubies off their backs…although there could still be a problem if anyone ever came around to pick up the “prisoners”, or even if someone who actually knows Jasper were to check up on her.  But one problem at a time, I suppose, and I can’t blame Amethyst for not thinking things through when she just got back from an emotionally charged fight with Jasper.

So Steven, Garnet, and Pearl tag along as “prisoners” on the ruby ship, and all four of them seem to have fun playing “rebel prisoners” with such a good audience (although Amethyst does get in a bit of a tight spot when she’s asked to fly the ship). 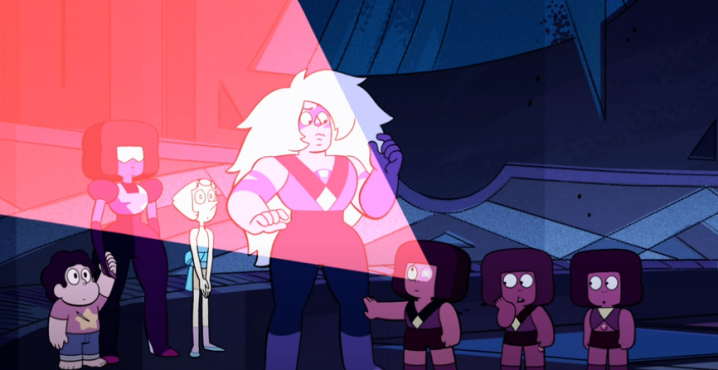 Eyeball: Look at this place, frozen in time. An Era 1 base – her Era 1 base. Was a tragedy what happened to her.

Leggy: Who is that, anyway?

Eyeball: Were you made yesterday? That is Pink Diamond. Jasper, maybe it’s best if you explain.

Eyeball: I understand. She was your original Diamond. Earth was Pink Diamond’s colony. Everything was going smoothly at first. Kindergartens were incubating their first soldiers. Big, warm pieces of quartz, like this mound over here, were being created from its rich minerals with great success. Then bam! One of Pink Diamond’s very own Quartz soldiers started a rebellion, and took it too far. […] I was there. I saw it with my own eye. I watched the leader of the Crystal Gems, Rose Quartz, shatter Pink Diamond!

Steven: No. Rose Quartz…would never do that! Sure, she had to fight, but…but she would never shatter someone!

This is particularly surprising considering the episode with Bismuth, where it’s confirmed that Rose opposed using a weapon that would shatter Gems.  But I also notice that it’s getting to be a pattern of him learning important things likes this from other people, like Jasper or even his dad, instead of the Crystal Gems themselves.  Amethyst seems to be pretty open with him, but she also doesn’t seem to know much more than him about what happened during the war (this is certainly a surprise to her, too).

Anyhow, they conveniently forgot that they destroyed the console the last time they were here, so the rubies can’t do what they needed to and must find another Diamond base, but Amethyst convinces them to just file the report for “Jasper” and sends them on their merry way…but then the rubies offer them a ride back to Earth (which, y’know, they actually kind of need), after Amethyst’s reverted back to her regular form, and the jig’s up.

Doc: What? We’ve been tricked? Again?

They may be slow, but they are still kind of cute.  It doesn’t take much effort to get them out the airlock, but unfortunately… 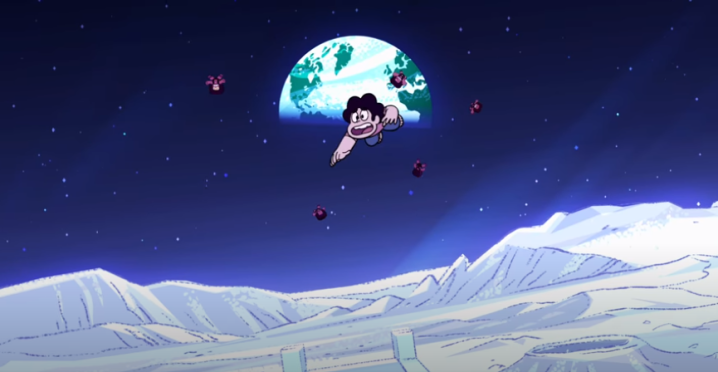 …they take Steven with them.