This is one of the more egregious examples of the whole “people don’t change that quickly” thing.  Because PTSD.

It makes sense from a narrative perspective that Lapis and Peridot would end up living together, but it really doesn’t from a character perspective.

Lapis: I really thought I would be living alone here.

Steven: Yeah, but this is even better!

Steven sweetie, I know that you’re all about harmony and all that, but it’s hard enough suddenly springing a roommate on Lapis, let alone someone she kind of has an unfortunate history with.

Peridot: What’s the problem? You’re the one getting all the good stuff! You got the propeller and paint cans on your side. You could do tons with those! Ooh, actually, I kinda want the paint cans. You wanna trade something?

Lapis: I don’t care about paint cans. That’s not the problem.

Lapis: It’s her. She’s the problem. I can’t stand the thought of having to look at her every day. She’s the one that dragged me back to Earth!

Peridot: Hey, it wasn’t my idea. I was headed to Earth and I needed an informant! It should’ve been a simple mission. Things didn’t exactly work out for either of us.

Peridot: But it’s not like that anymore! It’s different now. I’m different!

The show (and Steven) clearly sides with Peridot, because we know that she’s not “evil” anymore (and never really was all that bad to begin with).  But there’s one simple reason why I side with Lapis: She’s recovering from some serious trauma.  Yes, Peridot is not in a good place politically, but she’s had enough time to adapt to her new life and (more importantly) trusts the Crystal Gems to help her in a pinch.  Lapis still can’t bring herself to trust anyone but Steven, mainly because of her traumatic past which they explored last episode.  The focus SHOULD be on what Lapis needs to recover, and having someone around who once participated in her abuse might not be a great idea, even if she has changed for the better in the interim.  Even if Peridot sincerely wants to help, sometimes the best thing you can do for a person is give them space.

Lapis: Steven, I don’t think this is gonna work.

Steven: Uh, sorry. I thought this was going to be okay. I forgot that the last time you saw each other wasn’t so okay.

Peridot: That was in the past. It’s not like that now!

Peridot: But obviously she doesn’t! She’s the one that needs to know. I want her to understand!

Steven: Aw, Peridot, that’s sweet! That’s the you you need to show her.

Here’s the thing: No matter how much you’ve changed, you’re still accountable for your actions in the past, and it’s kind of unfair to expect Lapis to just forgive her, especially considering that she’s spent a lot more time with “bad” Peridot than “good” Peridot.

I might not have harped on this quite as much if I hadn’t seen this character done much better elsewhere, namely Rin in Fruits Basket.  She also endured a lot of abuse over the course of her life, particularly from the villain (although not exclusively).  She didn’t trust anyone else for a long time, so she tried to do everything herself (which only made things worse for her).  And at the end of the story, even after the villain has repented and made up with most of the characters, Rin was still struggling with the idea of forgiving someone who hurt her so badly.  Because that kind of “weakness” is pretty common; as I’ve mentioned before, I myself tend to struggle with resentment.

Anyhow, Steven encourages Peridot to show her desire for friendship with a card.

Lapis: “Sorry I interrogated you. You were just full of such useful information. That’s a sincere compliment. Peridot.”

Needless to say, she wasn’t won over.  Although there are some great faces!

Their next approach is gifts.

Steven: It’s from the hole where we drilled; Peridot and I sealed it and filled it with water.

Peridot: It’s a gift for you, cause, you know, water’s your thing. Pretty good, right? The barn’s out here in the country, but now you can get your moisture fix whenever. Do all that water stuff you do.

Lapis: Water? Seriously? […] You do realize that I spent the last few months trapped under the ocean, right?

Peridot: Sure, but I thought-

Lapis: It was an endless crushing darkness, wet and bleak and suffocating. Water was the tomb I lived in for those months.

Lapis: Yeah. I’m kinda taking a break from water right now. But thanks. For the lake. Don’t worry, Steven. It’s not your fault.

Yeah, this is just fishing for reasons to hate Peridot.  But I still have to wonder if there can really be no other option than making these two live together.  Steven hasn’t even consulted Garnet about this yet!

But since trying to give Lapis something they thought she would like didn’t work, Steven suggests Peridot give her something that she herself cares about. 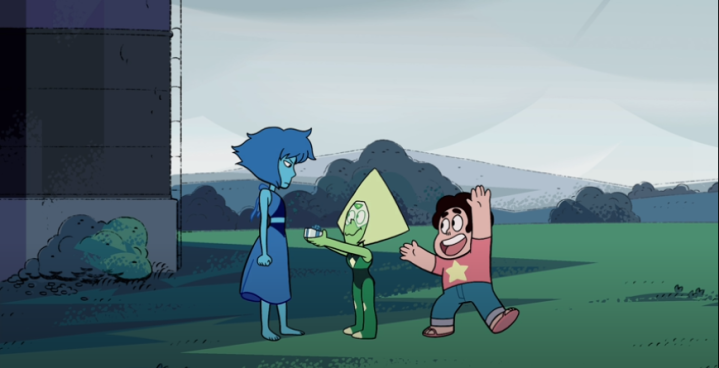 Peridot: When I was stuck here, Steven gave me this tape recorder as a gift and I didn’t really get it at first, but it made me feel better just to talk about all the weird stuff that was happening. It’ll help you, too! You press the button to record, and then you talk into it.

Lapis: I don’t want your garbage.

Yeah, this is why it’s NEVER a good idea to give something that has sentimental value to you (except maybe if the person in question is well aware of its significance).  If you have to explain it, you’re just giving them a used item and a story.  But at least they finally talk.

Peridot: What, were you trapped in a tape recorder, too? Look, I get it, you know! You’re confused. You can never go back to Homeworld. This place doesn’t exactly feel like home yet! You’re alone. No one could possibly know what that feels like! Oh wait, I do! We’re the same! Except, you don’t have to be alone. So tell me, then, what you want from me, and whatever that is, I’ll do it.

Lapis: I want you to leave!

Is her anger misdirected?  Absolutely.  Is it understandable under the circumstances?  Also yes.

Steven: Lapis, why are you being so mean to her? She’s really trying.

Lapis: Why do you trust her, Steven?

Steven: Because I know her! Lapis, you’re not even giving her a chance. You should’ve at least gotten to know her before you decided you don’t like her.

This is a conversation that would’ve been really helpful at the BEGINNING of the episode.  Then maybe they could’ve spent it actually getting acquainted instead of Peridot making ill-advised overtures to a hostile Lapis.

But of course Peridot isn’t actually gone for good. 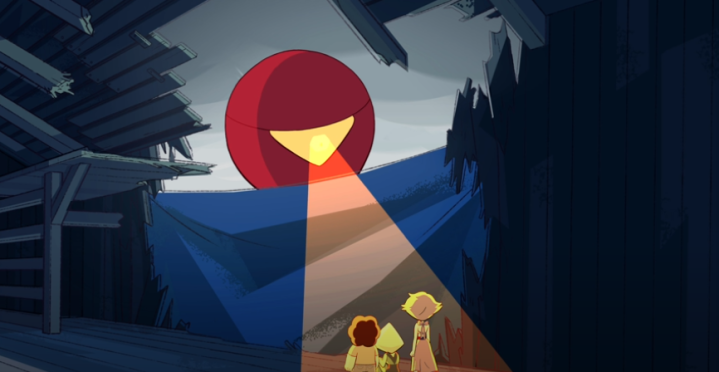 Because a Homeworld ship is tracking her down!

Peridot: This is it, Steven! They’re gonna wipe my precious grin off the face of this planet!

But when Lapis sees Steven ready to protect Peridot, she figures she might as well take out the ship herself.

Lapis: Peridot, are you okay?

For better or worse, that’s the end of that conflict (but not the end of my gripes about Lapis’ characterization).

And after the off pacing of the last season, Season 3 has been erring in the opposite direction, essentially doing cliffhangers for at least these first few episodes.  I mean, if you’re going to focus on plot, you might as well.