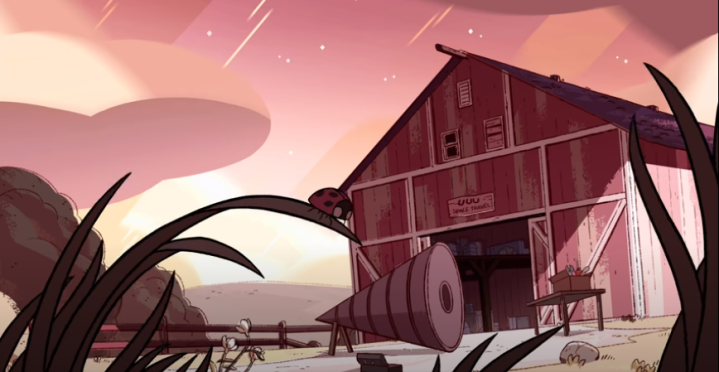 This is one of those episodes where the lovely backgrounds actually aid the storytelling (in more ways than one).

First, Steven attempts to get Peridot to stop and enjoy the scenery, and teaches her to sing while he’s at it.

Steven: We worked hard, and we deserve to take it easy for a little bit. I mean, just look at that view! It’s beautiful.

Peridot: It’s going to be blown to oblivion by the Cluster if we don’t get back to work!

I’m reminded of Steven’s comment in “The Return”, when he wondered if the Gems would change their minds about destroying the Earth once they saw how beautiful it was.

Peridot certainly doesn’t have a great singing voice, but I appreciate the sentiment of encouraging her to express herself through music nonetheless. 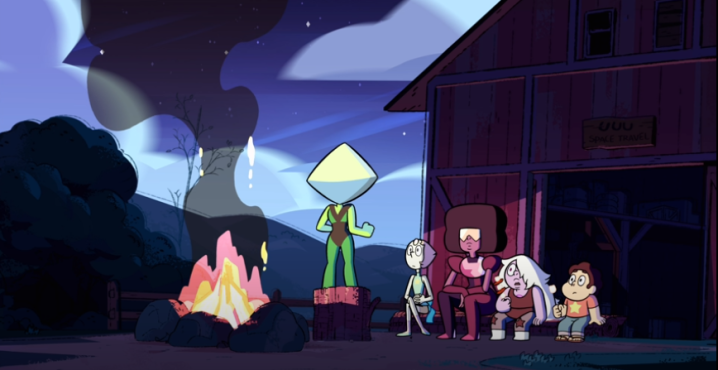 I guess we’re already here
I guess we already know
We’ve all got something to fear
We’ve all got nowhere to go
I think you’re all insane!
But I guess I am too
Anybody would be if they were stuck on Earth with you

From then on, she seems to get along better with the other Gems, and before long they’ve actually finished The Drill…but they still need to get the exact coordinates of the Cluster, and in order to do that they need to visit an old base on the Moon.  And they can’t use a warp pad, so they have to use the magic Lion warps.

Steven: Aw, Lion. You’ve earned your naps for the week.

The Gem base conveniently has a breathable atmosphere for Steven, which I might not have noticed if they hadn’t explicitly drawn attention to the low gravity, but whatever.

Peridot: We’re Gems. We’re a space-faring race designed to conquer other worlds. Our physical forms adjust automatically to the gravity of any planetoid. 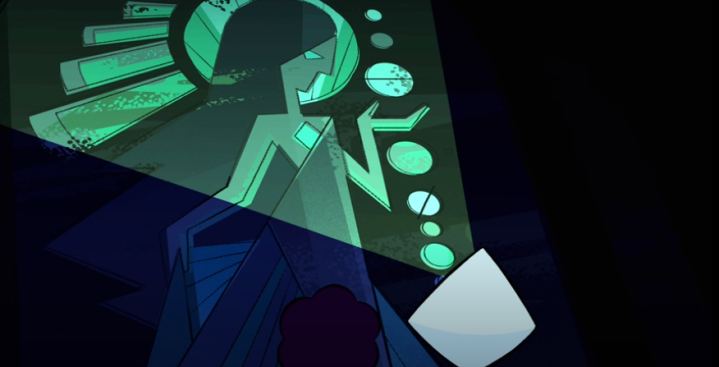 The Diamond Base is quite grandiose, but it maintains a somewhat eerie atmosphere by limiting the lighting primarily to the lights from their gems (specifically Pearl and Peridot).  And the giant figures on the walls contribute to that atmosphere, too; evidently they’re depictions of the Diamonds.

Steven: Wow. So, who are the Diamonds, anyway? They seem like a big deal.

Peridot: Are you joking me? The Diamonds are the Gem matriarchs! Together they make up the great Diamond Authority that governs Homeworld and all the outlying colonies! We live to serve them…I mean, we were all made to serve them even though some of us don’t anymore…

The two Diamonds they’ve named so far are Blue Diamond (apparently Sapphire’s former master) and Yellow Diamond (the one on the other end of Peridot’s seemingly divided loyalties).

Peridot: You can’t sit there!

Steven: Why not? It’s really cool!

Peridot: That chair is only for the most elite Gems. You can’t go around sitting where an elite would sit!

I cannot deny, I love Peridot’s evil/mischievous laugh, even if it would probably get annoying if you were subjected to it on a semi-regular basis.

Anyhow, they find what they’re looking for without much trouble, but Steven just HAS to poke around a little more.

Note the absence of Russia.  I’ve heard this was payback for Russia censoring the show (which is particularly ironic considering all the censoring of anime America did in the 90’s).

Peridot: So here’s a map of all structures that were originally built on Earth. All told, this probably only accounts for maybe 5% of what was originally planned.

Steven: What was the plan? 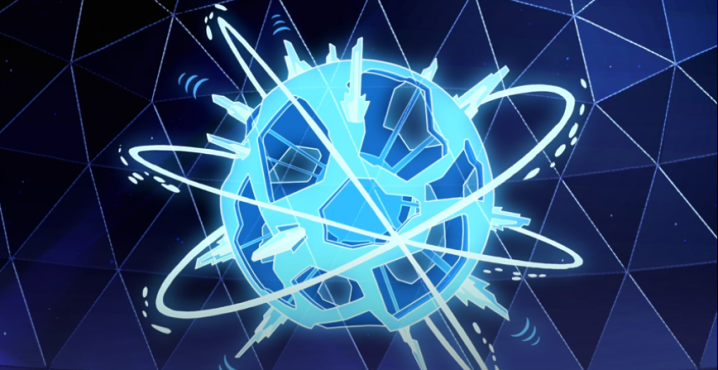 Peridot: Tada! A finished Earth colony. Wow, look at this! 89 kinderagartens, 67 spires, a galaxy warp in each facet, efficient use of all available materials…what were you thinking shutting this operation down? It could have been great!

Peridot: What do you mean? It’s perfect. Look at it!

Pearl: We are looking at it. 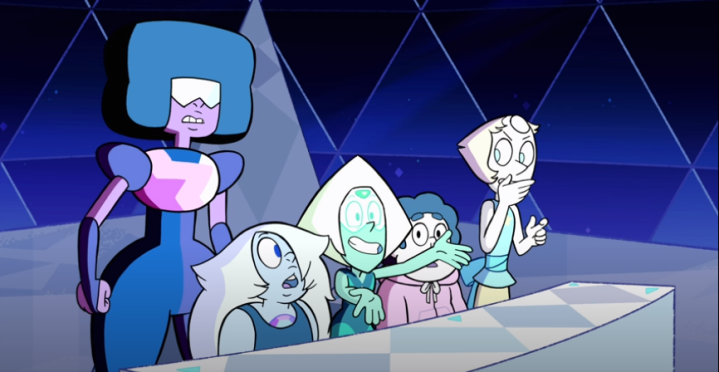 Garnet: Completing this colony would have meant the extinction of all life on Earth!

Peridot: But think of the good it would’ve done! The Gems that would’ve been made, our empire expanded!

Pearl: Rose Quartz believed all life was precious, and worth protecting.

Peridot: Well if she wanted to protect it, she did a lousy job. There’d be no Cluster if the Earth had stayed a colony! Now there’s no colony, and there’s gonna be no Earth, so thank you, Rose Quartz! You doomed the planet.

Steven intervenes to keep Garnet from punching Peridot in the face, so she instead vents her feelings on the control panel.

I like how this show manages to flip the script on common American perspectives, both regarding colonialist tendencies and anti-environmentalism.  Peridot’s point of view is exaggerated, but it does emphasize how “the greater good” can look a lot different depending on where you stand in the equation; the whole “blaming the rebels for their oppressors’ brutal retaliation” thing feels particularly prescient. 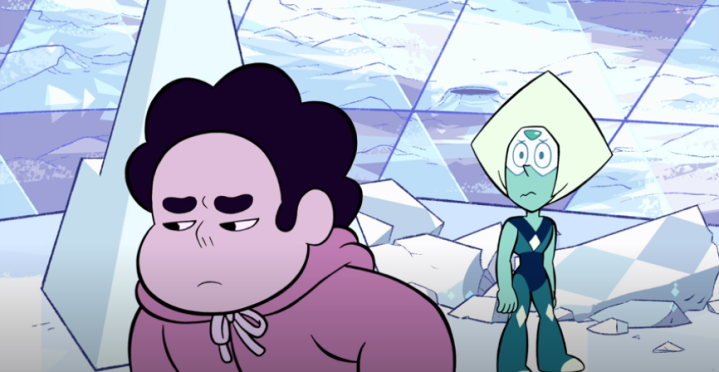 You know you done bad when STEVEN is disappointed in you.

Peridot: What’d I say? I’m just stating a fact. The rebellion didn’t really “save” Earth. It just delayed the inevitable.

Steven: That’s not how they see it. They’ve spent thousands of years trying to protect the Earth. I thought, maybe, you finally understood why.

Then to top it all off, Steven sees Peridot pilfer something from the fancy chair (and try to hide it).