Steven is about to enter the Drama Zone. 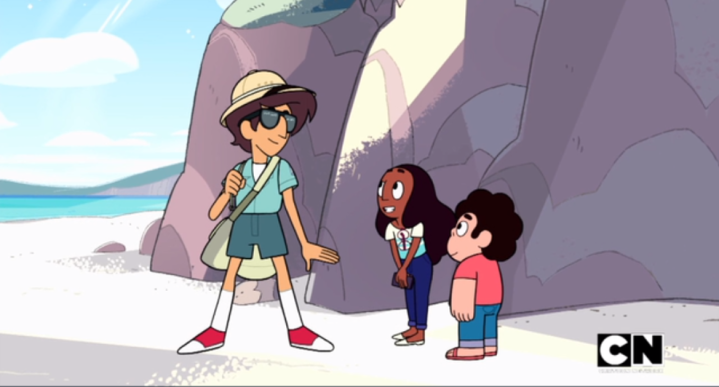 Meet Jamie, the mailman (or at least the only mailman who knows where Steven lives).

Jamie: Oh, you know, just spent some time where all the big pictures are made.

This is one of the first indications that the show is actually supposed to be set in America…just an America with a wildly different cultural topography.  Where municipal governments are apparently the only ones that matter, considering that there were never any issues with federal agents coming to check out an ALIEN SPACE SHIP that first attacked and then crashed into the town.

This also happens to be the first undisputed episode of Season 2, and the show is quick to remind the audience that the last season ended with two enemy Gems escaping…or at least one of them escaped, and the other was dragged off into the ocean by Lapis Lazuli in full angry sea goddess mode.

And thus Jamie is instantly smitten with Garnet, because apparently he’d never seen any of the Crystal Gems before.  So he returns the next day with a love letter in hand.

Jamie: When I saw you rise like an ancient sea-nymph, a white-hot steel pierced the deepest artery of my being! You are a cardiac surgeon and I am your transplant patient and you stand poised over my chest holding my still-beating heart, hesitating, waiting, wondering. So I implore you to join me for dinner, or maybe lunch if you want to keep it casual, next Friday at the Crab Shack! I await your response, as the camellia awaits the rise of the moon (cause, you know, it only blooms at night and stuff). Love, Jamie.

Jamie is one of those characters where I feel like I probably knew that person in community theater.  He always feels like he’s playing a part, so it kind of works when his lines don’t feel quite like something a real person would say.

Steven: Garnet’s already in a relationship.

Steven: Well, yeah. She is a relationship.

Just in case anyone was tempted to say Ruby and Sapphire are “just friends” or something (although, again, that’s not to say that fusion is inherently romantic, only that this one definitely is).

But Connie insists that they at least write a response.

Garnet is not one to mince words.

Connie: At least it’s honest and to the point!

Jamie: Life is crazy. One day you’re right here in Beach City delivering mail and then the next thing you know, you’re on a bus to Kansas following your dreams of becoming an actor. Follow your dreams, they said. But no one said anything about all the rejection and sadness there was to be found. So many auditions, day after day, so much rejection day after day…that’s why I came back. One more rejection would’ve destroyed my fragile heart. Sorry. Sometimes I get caught up in the drama zone, you know?

I feel like the writers didn’t actually know that much about how films are cast.  Seriously, there are rarely cattle calls for major roles in film, and a lot of minor/extra roles are mostly decided based on photos.  Like, I was actually an extra in a movie once, and I never did an audition – all I did was send in a photo.  Although I suppose I’ve never been to Kansas…

Steven: How can we give this letter to Jamie now? He might get upset.

Connie: We can make adjustments. We can match Jamie’s poetic language and let him down easy! I watched some episodes of a torrid soap opera once, so I’m confident that I get the gist of romance!

I mean, I can kind of understand why a kid might want to try their hand at writing a poetic love letter, but this is a terrible idea Connie. 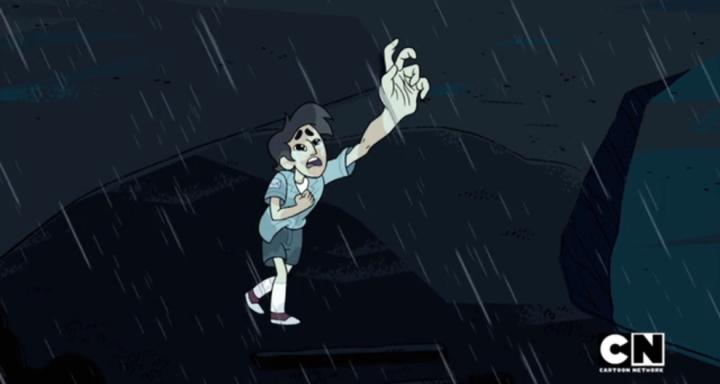 Jamie: Garnet! You come. You can tell Steven about all the beautiful things you wrote to me in your missive!

Garnet: I didn’t write that.

Steven: Connie and I wrote that letter, Jamie! […] I’m so sorry, Jamie. We just wanted to let you down easy…

Jamie: Wilst thou not scorch me, my darling sun?

Garnet: I am not, nor will I ever be, interested. Go away.

I have to admire her for her bluntness.  Also Jamie clearly does not understand the grammar of Shakespearean English.  Which might actually be part of the reason why he misconstrued the letter, now that I think about it…

But after Jamie has a fit of melancholy, Garnet finally cuts out the middleman and just talks to him. 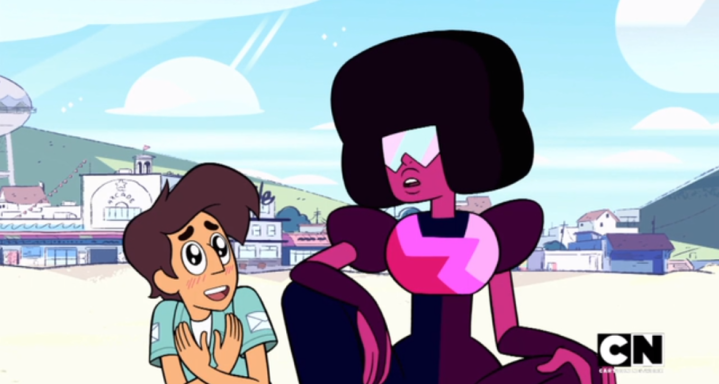 Side note: He’s totally doing (or at least attempting) the ballet mime for “I love you”.

Garnet: I didn’t mean to upset you.

Jamie: Then will you go out with me?

Jamie: But I’ve loved you since the moment I saw you!

Garnet: Love at first sight doesn’t exist. Love takes time, and love takes work. At the very least you have to know the other person. And you literally have no idea who, or what, I am.

Jamie: But I bloom for you, like-like a camellia under moonlight-

Garnet: No you don’t! You make a very convincing lovesick fool. You convinced these children, you even convinced yourself. You’re a fantastic actor!

Jamie: What am I supposed to do now?

While I’m not prepared to declare that there’s “no such thing” as love at first sight, I definitely appreciate Garnet’s emphasis on active love as opposed to momentary feelings.  Crushes are fine in their way, but you need a lot more than that to base a relationship on, and you certainly shouldn’t go blaming the object of your affections if they don’t feel the same.